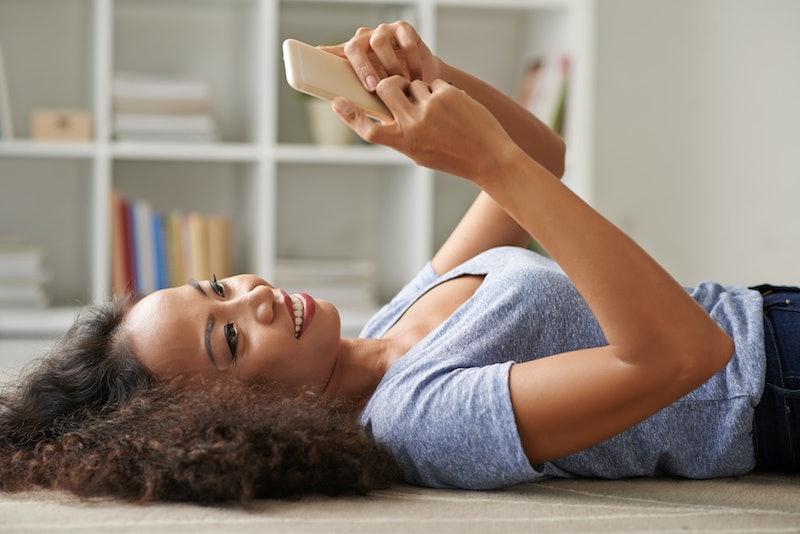 Ah, the tender first 12 months of a new relationship. Dinners looked forward to all week, carefully curated selfies and date outfits — and carefully, lovingly, arduously composed texts you exchange with your partner in the first year of dating. If those exciting, dizzying first months wind up being the beginning of a long-term relationship, you'll likely look back at those yards and yards of texts with a mixture of bemusement and affection — how painstaking it was to decide whether to write "hi" or "hey". How cautious you were about texting too often or too little! After a year or so, it is no big deal to dash off a text, even if all it says is "sup." But in the beginning, a little goes a long way, and no one wants to appear too overly enthusiastic.

My favorite story about first-year texts is that Aziz Ansari's girlfriend compiled all of their texts into a book, and gave it to him for their first anniversary. In his book, Modern Romance, Ansari notes that “For certain messages, she wrote out what was going on through her mind, and it was amazing," as reported by the Washington Post. Incredibly sweet, and also really fascinating, I'm sure. Regardless of whether you're Ansari's girlfriend or not, here are the 10 texts that pretty much everyone exchanges in that first sparkly year of dating.

1. The "Just Following Up" Text

This is the text you send (or receive) after a promising first date, or after meeting someone for the first time. And I don't believe in waiting three days from first meeting or first date. I will say, though, that it's worth adding a little more to this fairly generic text if you're feeling confident. Try writing a message like, "In fact, there's a showing of [insert film playing at revival cinema you've been dying to see here] on Thursday at 7. Wanna go?" This way, you're starting the next step and not leaving things to hang in the air forever. If your potential date is game, he or she will accept your offer, or give a counteroffer if they're not free. If not, you'll know right away — and won't spend three days wondering if you'll hear from them ever again.

A bit of humor goes a long way here. It's worth making that little joke or referencing something the two of you discussed previously, even if this is a risk. Yes, it could come off sounding dumb — but if you don't add anything of the sort, you're sure to come off sounding flat. Much worse.

2. The First Use Of Emojis Text

For some, their very first text communications are emoji-laden; others much prefer to hold off until they're at least a few texts along. In my own personal experience, this was a text sent to me just after I'd opened the emoji floodgates, and I was very impressed with the person on the other screen and his emoji abilities. "Bravo!!!!!" I wanted to text back. But instead I texted back nothing. Our conversation was over. We'd made a plan. At this stage in the game, that's it. One doesn't want to upset the balance by texting too much, too often or too many weird things. Which brings me to …

This sad little empty text box is full of the sentiment of that text you so badly want to send — but don't. I feel as though in the beginning of a relationship, you always want to write a message that you forbid yourself to write (or if you do write it, you delete it before sending). This is often something along the lines of the above-mentioned "Bravo" with 45 exclamation points after it; or maybe it's the "Wish you were here" text you want to send after a few weeks when you're at a party; or maybe it's just a silly joke you heard this morning on the way to work. Whatever it may be, this text box winds up empty in the end. And it's for the best, because it's wise to go slowly — but it takes major restraint of pen. Or, in this case, restraint of finger.

4. The Excited Response To A Date Offer Text

This text really could say, "Yeah, totally! I love [insert just about anything here]. The point is not the contents of the date, but the date itself. Unless your new beau suggests a visit to the local satanic cult gathering (and even that might be worth checking out if you're really into them), most early-days texts would reveal a "yes" response to almost anything. Of course, if you're dating someone who really gets you and invites you to the most amazing concerts, art events, films and dance performances, even better.

Some might disagree with me on this one, but I think there's nothing wrong with letting a little enthusiasm show through in the beginning, and a few errant "Omg"s or other exclamatory remarks are A-OK — even desirable. They show that you're excited about what's happening between the two of you, and, contrary to popular modern-dating belief, this is a good thing. If a few exclamation points scare off your perhaps-partner, it wasn't meant to be anyway, and it's better to know straightaway.

After a really special night, it's important to say thank you, and really show how much the gesture meant to you. Maybe your new parter, who is slowly but surely gaining the title of "new partner," took you to the ballet, or the opera, or to, let's say, a Louis C.K. standup show — whatever the case may be, the point is that they took you somewhere really amazing, and you want to show your gratitude. But then you're like, "Drat! How to show gratitude without appearing to be head-over-heels in love? Because I'm not! Yet. But maybe I am going to be soon. Anyway, that's beside the point. How best to show my thanks???" Well, it's easy. Send a text. Say what you have to say. Move on with your life.

Accidentally! I left my stuff at your house accidentally! It's inevitable that, sooner or later, you'll forget a book or earring or other personal item at your gal or guy's place, but then you don't want them to think that you left it there on purpose, so as to garner an invite to come hang out sometime soon. But also you need that book for class, so actually you really do need to come over stat to get that book. And, hey, you wouldn't be adverse to hanging out while you're at it, but that certainly isn't necessary. This is the text you send in this situation.

Things are past the point of just heating up between the two of you. You're officially an item, but not officially in love yet. Who can say if love is in the air for sure or not, but signs point to yes. And then, one day, out of the clear blue sky, someone sends the heart-eyes emoji. If you're on the receiving end, you're stoked beyond belief, because probably you've been wanting to send this emoji for quite some time, but you've been holding off, because you were afraid of sending it first. But it's so cute! And conveys so much! Or — if you are the brave first-sender of this emoji, then you probably commence holding your breath immediately afterward until you hear back. If it's something nonchalant or equally sweet, you're like, "Phew."

If you don't hear back for hours or the response is a little weird or chilly, you're like, "Nooooooo." But then you get over it, because there are so many little off-kilter moments like this in the first year of a relationship as it relates to text messaging. That's just the way it is.

Ah, the "I miss you" text. Too soon to send after a few months, when you're on a business trip and your boo is at home; so right to send after a few more months than a few more months, when you're in Greece with your girlfriends and your partner is across the ocean. Or maybe you receive it when your partner goes on a trip and you're at home in your daily routine. Either way, this is a feel-good text to send as well as receive, and warms the very cockles of your heart (and your partner's, probably/hopefully). This is a softhearted milestone that you won't soon forget, and feel so good when it first happens. Bittersweet, but good.

Dun-dun-dun. You've felt it, you've said it, you've meant it; and now you've texted it, or had it texted to you. There is something so blissfully lovely about seeing it in print, though — that first "I love you" text, plain as day, transmitted through the ether and into your lovely, extra-smart phone. Thank you, phone, you think to yourself. And this really is one of the arguments for phones: You get things like this in writing way before you used to. In the past, you'd have to wait until a birthday or anniversary card for such a sentiment to be written out. No longer. These days, the first "I love you" text often comes not so long after the first "I love you" is uttered. Sigh. And now you get to ease up on some of the text pressure, and enjoy the ride, because the second year is way more laid-back in the realm of text.