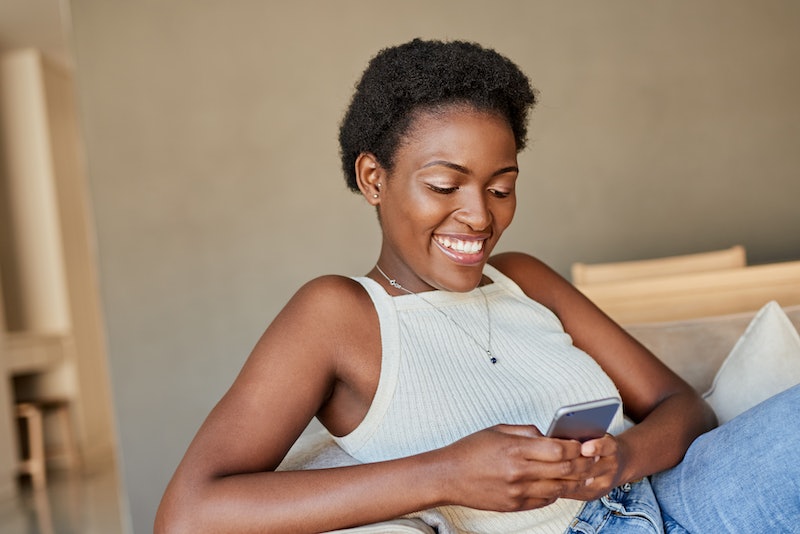 A new year means a new you, so why not take the opportunity to brush up on your texting etiquette? Because as it turns out, apparently you shouldn't use acronyms when you text, according to survey information compiled by UK mobile company TalkTalk Mobile. "IDK, my BFF, Jill?" is so 2007.

To be fair, the TalkTalk Mobile survey isn't new; however, it's recent enough — from 2014 — that it's worth a second look, especially since we've recently established another all-important texting rule: that of not ending your text messages with periods. The survey set out to define dating texting etiquette in order to better understand how to text on the first few dates so as to keep the door open for more dates — and for the 1,000 Brits who took the survey, most acronyms were a huge turn-off, making a person seem “overly keen or too needy," according to The Daily Dot. Other red flags included unnecessary small-talk, more than two texts without a response, or sending more (or fewer) kisses than the other person just sent. Some positive ways to text, according to the survey, included replying to messages within a couple of hours and texting your partner good morning and goodnight. It's not rocket science, folks!

Though acronyms can be handy sometimes, it's no secret that overuse of them is irritating. And, since we no longer have flip phones and instead use smart devices with emoji, photo, and GIF capabilities, there are so many different ways to replace acronyms with something less annoying. Let's take a look at some acceptable acronym alternatives.

... Use The Face With Tears Of Joy Emoji

Why not replace an outdated acronym with the 2015 Oxford Dictionaries Word of the Year? The tears of joy emoji is the new, hip way to say "LOL" as it it's truly meant. Sure, the sender might not literally be laughing out loud or crying with tears, but the emoji definitely represents amusement or acknowledgment that something is funny — unlike "LOL," which has pretty much become meaningless at this point.

IDK seems to be extraordinarily outdated and is mostly used by people ironically. We can do better.

If you haven't seen ¯\_(ツ)_/¯ used recently in your life or text messages, it's time to change that. The "shruggie" or "smugshrug" as described by Kyle Chayka in "The Life and Times of ¯\_(ツ)_/¯" is interesting, strange, and elicits more of a attentive response than IDK; according to Chayka, it also "transcends the Internet and perhaps language itself," so obviously it's a pretty big deal. Here are a few ways to get shruggie on your phone. Have fun.

... Try Having A Meaningful, Honest Conversation About Sex

When it comes down to it, no GIF, emoji, or acronym can replace a conversation when it comes to talking about or asking your parnter for sex or other forms of intimacy. Skip the acronyms for the sake of conversation (face-to-face conversation, if you can). Later on down the road, depending on the levels of trust in the relationship, you and your partner may decided an emoji is a totally appropriate way to ask for sex — but that step is a luxury that comes only after consent and some healthy communication.

OMG is a little irritating because it can mean a lot of different things. When someone says it, it's hard to tell if they're shocked, pleasantly surprised, scared, happy, or a combination of the above. For example, if I told my co-worker I got the promotion he wanted and he responded "OMG," I wouldn't know whether he was outraged or trying to congratulate me.

If you search "OMG" in Giphy, you'll find 6,525 results that much more accurate express the exact type of "OMG" moment you're having. The above GIF would be used if, for example, my co-worker were excited and congratulatory about my promotion, as opposed to upset and hurt.

Because really, when has that ever actually happened?

... Try An Emoji Combination Including A Laughing Emoji And The Peach Emoji

Because who doesn't love a euphemism involving delicious fruit?