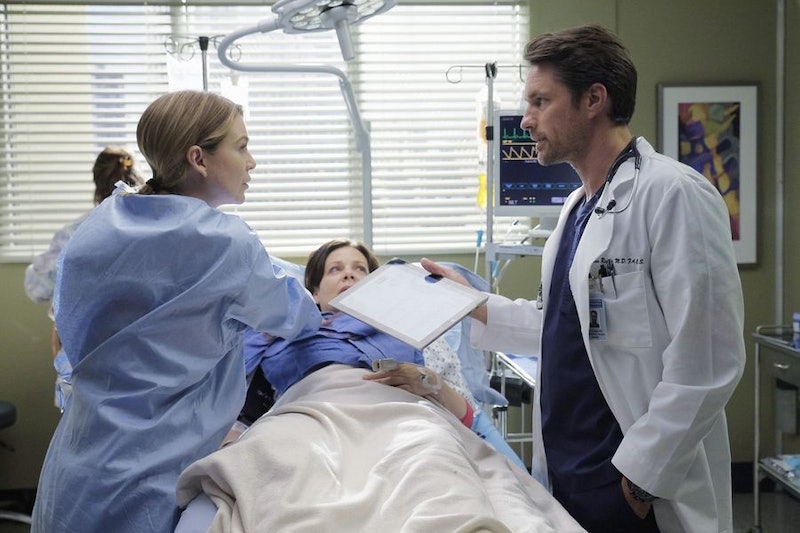 The mystery of Owen Hunt and Nathan Riggs and their Grey’s Anatomy past just got a little clearer – but not by much. When Riggs showed up at Grey Sloan, Hunt was not happy. Actually, that’s an understatement — he was livid, but we didn’t know why until it was revealed that Riggs was married to Hunt’s sister, Megan, and that Riggs “lost her” somehow. That’s murky, I know, but Riggs told Meredith more of his story, and I have to ask the question — Is Owen’s sister actually dead on Grey’s Anatomy ?

Let’s backtrack here. Owen blames Riggs for his sister’s death, Riggs is wracked with guilt, etc. Here’s the story Meredith learned — Megan, who was also a doctor, was in a battlefield with Riggs. I assume that’s how they met — being Doctors Without Borders—esque trauma surgeons. Anyway, there was one helicopter, and one room for a patient and a doctor. Riggs didn’t want Megan to go in the chopper because it was one piece of crap helicopter, basically, but she argued that it was her patient and she had to airlift the patient to safety. Well, Megan won that argument, but, as Riggs said, the helicopter never made it to its destination. In fact, it and its passengers were never found. The plot thickens.

There was never a body or a trace of Megan found, so I think that she could be alive, and I think it would be an amazing addition to the Riggs/Hunt storyline. Two men, torn apart by blame and grief, get a reprieve and a second chance to rebuild their relationship? It would not only be interesting to watch how Riggs and Hunt repair their relationship but how Megan would act with both men. Could there be forgiveness here? I hope so, but I would also really enjoy watching the getting there.