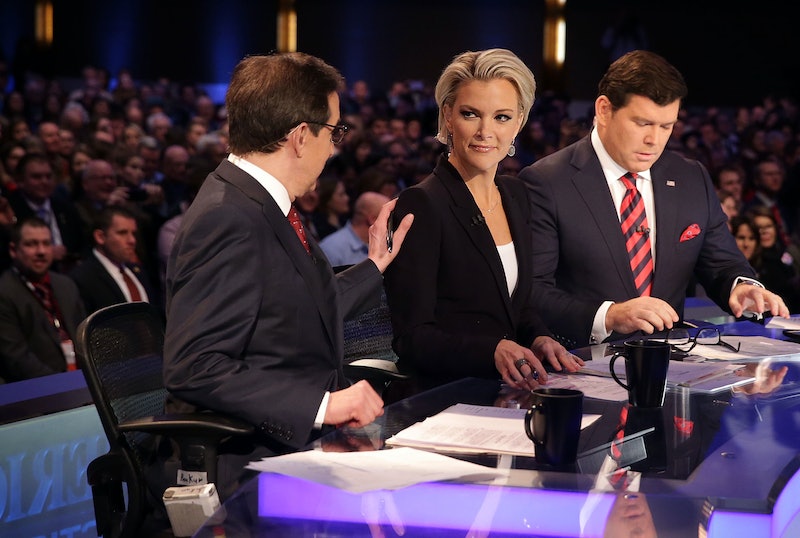 The Megyn Kelly-Donald Trump feud has a new chapter — and its advantage goes to Kelly. On Thursday, Kelly took on Trump during the GOP debate in Detroit to challenge the Republican front-runner on his lawsuit over Trump University. In doing so, she seemed to blur the line between moderator and debater, but she was probably completely justified in doing so.

The drama between Kelly and Trump began on Thursday when one of Trump's competitors, Florida Sen. Marco Rubio, brought up the controversial lawsuit surrounding Trump University. In the class-action suit, Trump is accused by some 5,000 plaintiffs that his real estate business curriculum was shady and full of false promises. The plaintiffs claim that the tuition left them thousands of dollars in debt, while the classes taught them nothing. As of late, Rubio and Trump's other competitors have taken to calling out Trump for the lawsuit, which he has refused to settle, even after years of ongoing proceedings.

When Rubio and Trump got into a heated debate over the lawsuit and the university, Kelly, who has a tense relationship with Trump on a good day, jumped in to set the record straight. "Let me just set the record straight, and then you guys can have at it," she said. She quickly explained the lawsuit and Trump's counter-suit, using quotes from the court's decision. All the while, Trump tried to interrupt her, as he has done to so many people during these debates.

As Trump tried to attest that his educational initiative had received an "A" rating from the Better Business Bureau, Kelly confirmed for viewers that the most recent rating found by Fox News was actually much lower: a D-. Trump acted somewhat surprised, but he quickly promised to provide proof that the rating was elevated.

The drama between Trump and Kelly played out in the same setting where it began. In the first Republican debate of this election cycle, some seven months ago, Trump insulted Kelly for a question that he deemed unfair. The attacks by Trump continued on Twitter and in the media, while Kelly remained mostly silent. In a more recent debate, Trump decided to boycott the Fox News-sponsored primetime event after the media outlet refused to remove Kelly from its moderators' table.

On Thursday, Kelly seemed to get back at Trump in the most mature and appropriate way possible: by schooling him with hard and fast facts. She took on the issue of Trump University more head-on than is expected of debate moderators, but her explanation of the case offered important context for viewers and an important challenge for Trump. Now, let's hope he doesn't launch another Twitter rant about her.

More like this
Fans React To Kelly Holmes’ “Extraordinary” ITV Documentary
By Sam Ramsden
Winter 'Love Island' Is Officially Coming Back & Twitter Has Thoughts
By Sam Ramsden
Kim Kardashian & Pete Davidson Took A "Very Romantic" Couples Trip To Tahiti
By Jordyn Tilchen and Bustle Editors
How To Fight For Reproductive Rights, Based On How Much Time You Have
By Courtney Young
Get Even More From Bustle — Sign Up For The Newsletter