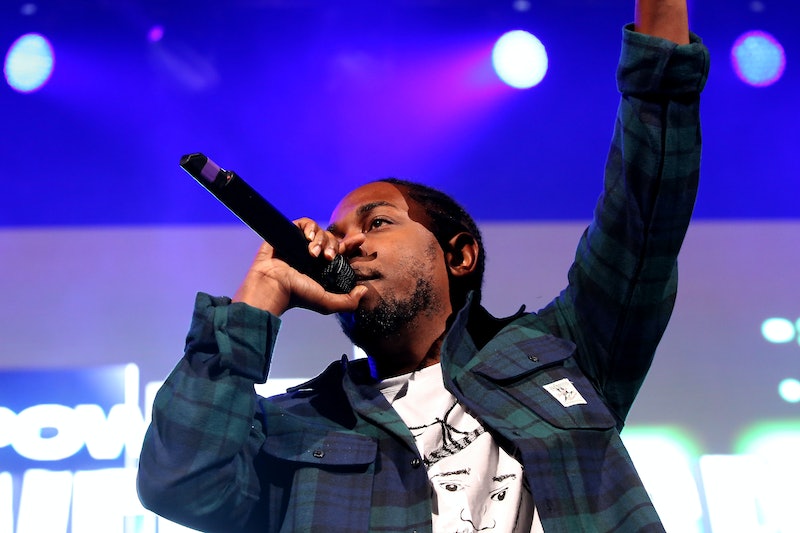 It's only been a few hours since Kendrick Lamar dropped his surprise album in the wee hours of Friday morning, but already, a vicious debate has emerged: Is untitled unmastered. better than The Life Of Pablo — Kanye West's recently released "gospel" album? While I don't think it's particularly prudent to offer up such a debate — surely, these albums are each their own, unique collections and comparing them track by track isn't actually going to accomplish true understanding of the weight of either project — it's not hard to see why the comparison is coming up.

With West's recent rash of self important tweets, all but screaming from the rooftops that he is, in fact, the greatest rapper of all time, some fans have started to sour on the rapper. Furthermore, West only released the album on Tidal after making fans wait an agonizing, and at one point indeterminate, amount of time to be able to simply stream the album. To this day, fans can only find the album on Tidal and West swears that's how it will always be. It's understandable that some fans would be frustrated, and perhaps, find Lamar's unassuming sudden album drop a wee bit refreshing. After all, while Lamar just shook up everyone's Friday, he did it in the most low-key manner: A single tweet linking out to an unassuming album title with the most unassuming cover art,

Lamar put no fanfare around his latest creation — in fact, the only person involved in the making who did write up an over the top message for fans was Swizz Beatz who posted this Instagram once the album dropped across all music platforms:

And yeah, I get why people are quick to compare the two albums. If you're frustrated with West's loud antics surrounding his somewhat surprise album (in that he was literally working on it up until the second it was released during his Yeezy Season 3 show at Madison Square Garden), it's only natural to appreciate Lamar's starkly opposite approach. But pitting the actual content of the complete separate and unique albums isn't actually getting us anywhere and, in a way, it distracts from the way you should actually listen to and appreciate a new album from an artist as talented as Lamar.

Despite my own frustrations with West, I have to say the comparisons should really stop. While West and Lamar are undoubtedly two of the top artists in hip-hop, if not the two top artists, that doesn't mean that they're in direct competition with each other. Both men focus heavily on the art of their music, and while, on paper, it seems to make sense to draw a one-for-one comparison, and while it may make for a few fun, biting tweets, that's not really why anyone listens to either of these artists.

More like this
Kim K Is Putting Kanye’s Memorabilia — Like Grammys & Clothes — In A Vault
By Jake Viswanath
Julia Fox Says She Dated Kanye To “Distract Him” So He’d Leave Kim K Alone
By Jake Viswanath
Kanye Allegedly Showed Explicit Photos & Videos Of Kim K To Yeezy Employees
By Radhika Menon
J. Lo Just Announced A New Album — And Ben Affleck Inspired At Least 1 Song
By Stephanie Topacio Long
Get Even More From Bustle — Sign Up For The Newsletter