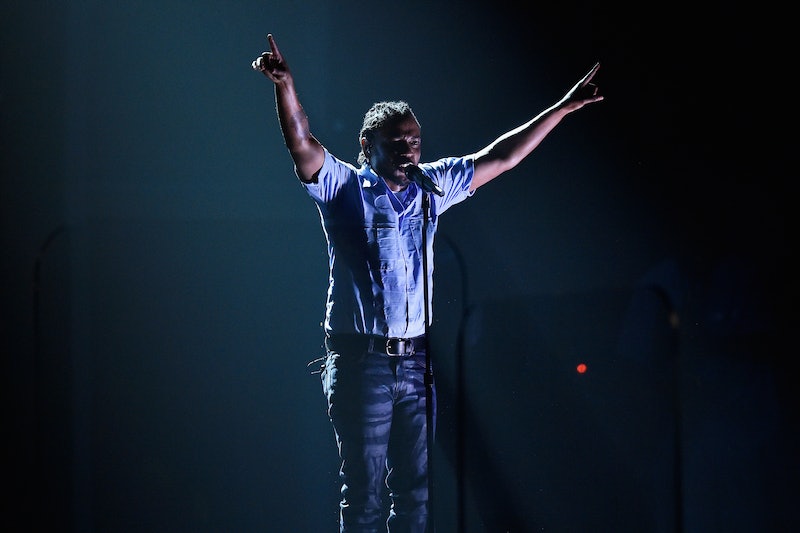 With a move that I'm sure made Beyoncé proud, Grammy Award–winning rapper Kendrick Lamar surprise released untitled unmastered. on Thursday evening, a new album comprised of (as its title suggests) untitled and unmastered material. Instead of being differentiated by names, the LP's eight songs are differentiated by dates, which presumably tell us when they were each written and recorded. As Billboard reports, Lamar performed some of these unfinished tracks during his recent appearances at the 2016 Grammy Awards and The Tonight Show Starring Jimmy Fallon. To Pimp a Butterfly, the 28-year-old star's last studio album, premiered on March 15, 2015 — less than a year ago — so the arrival of untitled unmastered. was truly unexpected. Lamar is known as a brilliant songwriter, so it comes as no surprise that there are many profound and impactful Kendrick Lamar untitled unmastered. lyrics for us to sift through and analyze.

Lamar's latest effort may only feature eight songs, but it still manages to be incredibly complex and insightful, packed full of thought-provoking imagery and memorable lines that fans and music critics alike will no doubt spend a lot of time discussing in the coming months. Below are nine of the most impactful lyrics from untitled unmastered.:

Key lyrics: "Some of us never did wrong but still went to hell..."

"I made To Pimp a Butterfly 'fore you told me/ To use my vocals to save man-kind for you / Say I didn't try for you, say I didn't ride for you / I tied for you, I pushed the club to the side for you..."

At the end of the last line above, Lamar could be alluding to his dedication to writing powerful songs with important messages, as opposed to just writing songs with meaningless lyrics about partying "for the clubs." He could also be referencing how those in the music industry try to take advantage of him for his talent.

"Why you wanna see a good man with a broken heart?"

With these lines, Lamar seems to be calling out our flawed justice system, just as he did during his recent performance of "Blacker the Berry" at the 2016 Grammys.

Key lyrics: "Black excellence, pessimist died countin' my coin / Hope it's evident that I inspired a thousand emcees to do better..."

There's no question in my mind that Lamar's talent as both a writer and a performer has pushed other rappers to step up their games in recent years.

Key lyrics: "In today's day and age we practice the self pity of taking the easy way out / You wait on them, him and her / But when a blessing takes long, that's when you go wrong / You selfish motherf*cker..."

Here, Lamar addresses our laziness and impatience as human beings. Often, we're quick to look for "the easy way out" instead of putting in the hard work necessary to move forward.

untitled unmastered. is available on iTunes, Spotify, and Tidal now.

More like this
An Ultimate Guide To The Music Of 'Rap Sh!t'
By Brad Witter
What Is Ben Affleck's Net Worth? At 50, The Oscar Winner Makes 8 Figures Per Film
By Meg Walters
Britney Spears’ Lawyer Responds To K-Fed’s Leaked Videos About Their Sons
By Grace Wehniainen
Beyoncé’s New Duet Made Her Mom Cry — & Is A Nod To An Old Destiny’s Child Song
By Grace Wehniainen
Get Even More From Bustle — Sign Up For The Newsletter