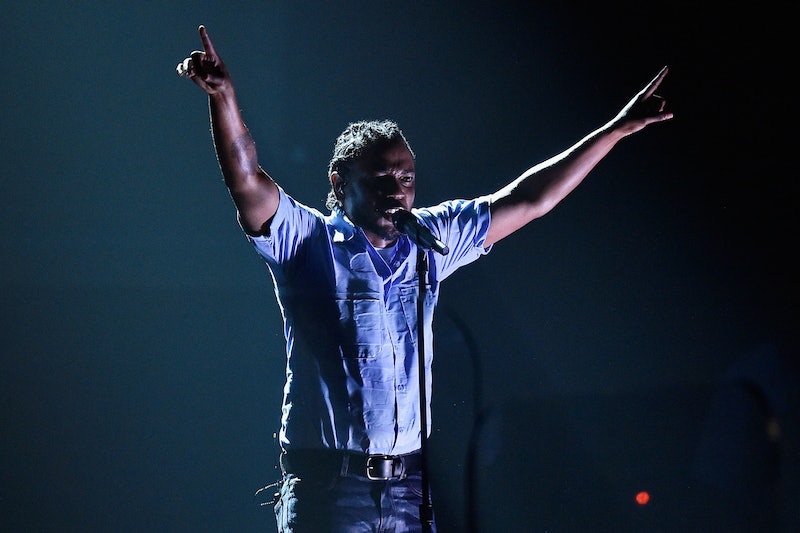 Now that you have listened to Kendrick Lamar's surprise album untitled unmastered. at least seven times, it is time to dig deeper and take a look at the album as a whole. While it is made up from tracks that didn't make the cut on To Pimp a Butterfly, these untitled songs are masterpieces in their own rights. If I had to sum up Kendrick Lamar's untitled unmastered. with just one lyric, it would come from "untitled 05 | 09.21.2014.," no contest.

If the album has a theme, it is justice. Lamar sings more about the broken system than he does about himself. His raps touch on what it is like to live on welfare, about the struggle to get an education, and the Black Lives Matter movement. There is a message behind every powerful lyric on the album, but the one that sums up the story as a whole is this one from "untitled 05 | 09.21.2014.": "'Cause I could speak the truth and I know the world would unravel, wait/That's a bit ambitious, maybe I'm trippin'."

Lamar is all about telling the hard truths. He raps what he feels, and his songs all have a deeper message. It's something he should be proud of, and I think it is something he is proud of — but in "untitled 05 | 09.21.2014.," he displays a bit of vulnerability in the midst of what is undeniably a powerhouse song.

Lamar is one of the few musicians who can say they are changing the world with their music and not be hyperbolic. Even with a surprise album that is full of songs without titles, Lamar brings all of his talent and passion to his music. He's not rapping about inconsequential things like how cool his car is — Lamar is too busy highlighting just how hard life can be, and how much he has had to fight to get where he is. It is refreshing to see an artist who is so committed to telling his own truth.

In many ways, Lamar is unraveling the world song by song. His music has the power to make you think, to make you reconsider your position on important issues, and to stand in awe of the ways in which he mixes jazz and rap so effortlessly. untitled unmastered. is ambitious and full of amazing lyrics that will stay with you long after the music stops — but seeing Lamar open up so freely in "untitled 05 | 09.21.2014." gives this raw, unexpected album an extra shot of truth from an artist that is all about telling it like it is.

More like this
Everything To Know About Taylor Swift’s 10th Studio Album, 'Midnights'
By Grace Wehniainen and Jake Viswanath
Mariah Carey Is Releasing Her “Lost” '90s Grunge Album
By El Hunt
Even If She Tried, Beth Ditto Couldn’t Stay Away From Music
By Ivana Rihter
What Demi Lovato Really Thinks About Child Stardom, Depression, & Sobriety
By Radhika Menon
Get Even More From Bustle — Sign Up For The Newsletter