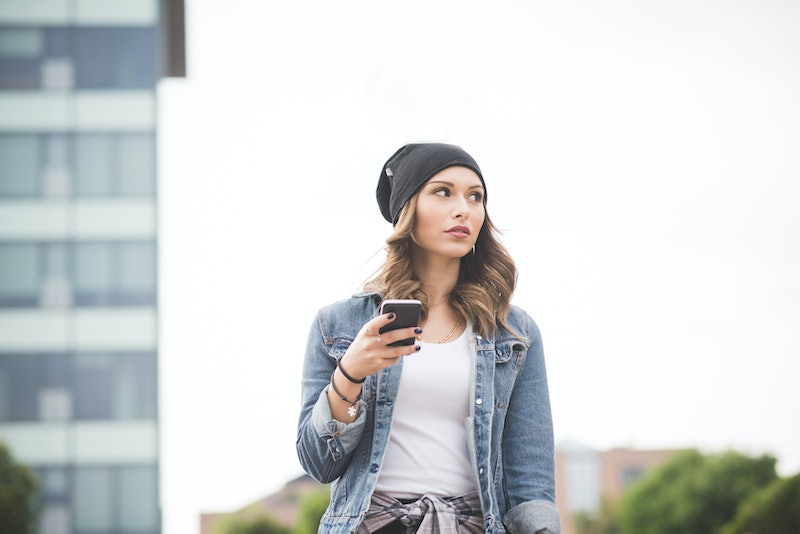 Since it is 2016 and all, you would think that things like online dating stigma would be banished. But as it turns out, online dating still has a bad reputation, at least in the eyes of some. Then again, Donald Drumpf — er, Trump — discussed the size of his penis on national television a few weeks ago, so who can say anymore if 2016 has any real meaning in terms of forward-thinking or sophistication. Maybe in 3016? In any event, a new poll from Pew Research Center zeroed in on dating apps and sites, including anything from mainstream Match and eHarmony to trendier Hinge and Bumble, and everything in between.

The findings show that, although people are definitely more amenable to searching for love (or at least a few dates) on the World Wide Web these days, there is still actually quite a bit more dishonor associated with such activities in public opinion than one might assume. Pew performed a similar poll in 2005, back when there was no such thing as Tinder or Happn, and people's view have certainly shifted in the past 11 years. But, really — not that much. Here's what Pew found about dating circa now:

In 2005, 29 percent of those polled agreed with the statement, "People who use online dating sites are desperate." Today, 23 percent still agree with that statement. Sure, that number has decreased 6 percent, but in the grand scheme, 6 percent really isn't that much — which means that, for the most part, attitudes toward dating online haven't changed over the course of the last 11 years. That strikes me as deeply bizarre, since every single single person I know has tried or is actively trying online dating. What gives?

2. More Than Half Concede That The Internet Yields Dates

Though the people dating online may be "desperate" to some, 59 percent of survey respondents think that online dating is "a good way to meet people." No word on whether any of the haters who called online dating "desperate" happen to overlap with those who see the Internet as a fertile breeding ground for meeting someone, but here's guessing that the answer to that is no.

In 2005, only 44 percent thought online dating was a good way to find someone, so this view has changed more than the "desperate" thing in the past 11 years — but still not that much. A whopping 41 percent still think online dating is a bad idea. Though I don't have much personal experience with it, I know a couple of couples who met online and are super happy together, so it would be hard for me to agree. Then again, I am all for meeting people IRL. But it's impossible to say that the Internet is a bad way to meet people, considering that most people use apps and websites for just that purpose these days.

Only 15 percent of respondents said they have ever tried dating online. And before you ask if everyone was over the age of 50 or something: In a word, no. Though those in the 18 to 24 age range reported slightly higher numbers — 27 percent said they'd tried apps or sites — pretty much everyone across the board said they hadn't tried online dating. I guess they didn't just poll people in New York, then.

4. Say What You Will About Online Dating, But It Can Work

The thing is, 5 percent of those who answered this survey who also happen to be in a relationship or marriage said that they met their partner online. Sure, that is pretty low; but also, when you really think about it, that is a lot. Technically speaking, if we're looking at these statistics to reflect life in general in the United States right now (which, of course, they can't, because they are statistics, and statistics are notorious for lying), that means that for every 100 couples you know, five of them met on the internet. This means that, for those of you dating online, love is possible. Not highly probable — but possible all the same.

5. One-Third Of Online Daters Are All Talk

Though two-thirds of the 15 percent who have tried online dating have carried it all the way to fruition — that is, they actually met someone, face to face, that they contacted via an online dating site or app — a third of those who have tried Internet dating left things where they started, and never made a real date. This is a change from 2005 — back then, only 43 percent who had tried a dating site had gone out and met one of those potential mates at a coffee shop or whatever — but it's still pretty low. Guess there are still a lot of trolls on the Internet, even on dating apps. Shocking.