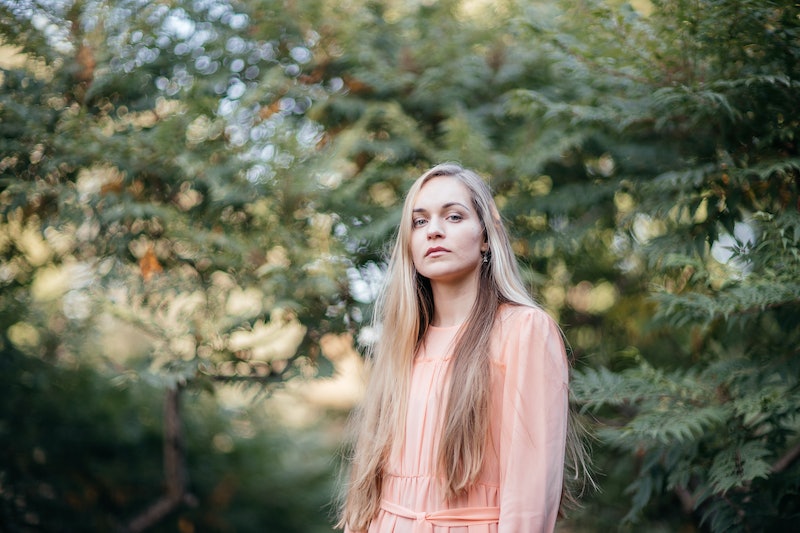 As a recent Saturday Morning Breakfast Cereal comic points out, it's hard for a woman to do anything without being labelled "feminine" for it. In the cartoon, a woman and a man play a game to see who can best enact their gender's stereotype, and when she declines to play, he tells her she's being feminine by doing so. As she tries to convince him she's sincerely not playing, her way of speaking keeps getting labelled more and more "feminine." The punch line? He realizes he's winning just by participating.

This "game," of course, is a metaphor for gender roles. No matter what, a woman cannot escape the "game": Even if she tries to opt out of gender conformity, her actions are still labelled feminine. And no matter what they do, men always win.

In this particular comic, it's the female character's way of speaking that gets her labelled feminine. But there are a slew of other things women are afraid to do out of fear that people will use it as proof of a gender stereotype. Here are a few things women (and men) should be able to do without anyone viewing them as proof of their femininity:

I know several women who have wanted to leave the tech industry or change their college major from something in the sciences to something in the humanities but are afraid that if they do, they'll let their gender down. While male-dominated fields and industries are worth equalizing, this means removing sexism, not pushing women to go into them. There's a fine line between saying that men can be nurses and women can be scientists and encouraging people to go into non-stereotypical fields. But the latter can make people feel responsible for dismantling gender norms they didn't create, and that shouldn't be their responsibility.

Rather than viewing crying as a marker of weakness and discouraging women from showing emotion in order to prove women are strong, we should be acknowledging the strength in vulnerability and allowing men to show emotions as well. The fact that a behavior has been considered masculine does not make it better. Feminism means letting women do "masculine" things and letting men do "feminine" things and not labeling anyone for it.

As the feminist art group The Guerilla Girls has pointed out, it's difficult for a woman to make art, music, or anything without it being evaluated as "women's" work. For example, one of the most frequently described elements of a band or song is the gender of the vocalist — if that person is a woman. "Female vocalists" (but not "male vocalists") is a whole category on the music streaming site Last.fm, and female creatives are often exclusively compared to one another. Even women's software code is judged differently. While it's great to explore and acknowledge women's issues in art, something a woman makes shouldn't automatically be considered "feminine" or only relevant to women just because of her gender.

4. Dress In A "Feminine" Style

There's nothing about pink that's inherently feminine. There's nothing about facial hair that's inherently masculine. This can be hard to acknowledge because people often use these manners of self-presentation to express femininity and masculinity, but that's simply because they've been socially constructed that way. A woman should be able to wear pink and dresses without anyone assuming she likes kids, is softspoken, is submissive in relationships, or has any other traits associated with women.

Women are often labelled too feminine for apologizing, putting others before themselves, or waiting their turn to speak. But while it's important for women to consider their opinions as valuable as men's, some of these actions are just a reflection of personal values that we should all get to choose regardless of gender. This may be another case where women don't necessarily need to be more like men, and maybe men who feel entitled to assert their opinions and needs in all circumstances should be a bit more "feminine," because that's not a bad thing.

More like this
Why You're Seeing Green Bandanas At Abortion Rights Protests
By Lexi Inks
The 3 Dating Apps Queer Women & Nonbinary Folks Actually Like
By Emma Carey
Eleven From ‘Stranger Things’ Is A Cancer Zodiac Sign, An Astrologer Says
By Brittany Beringer
How Getting An Abortion Has Changed From The ’60s Through Today
By Amanda Chatel
Get Even More From Bustle — Sign Up For The Newsletter