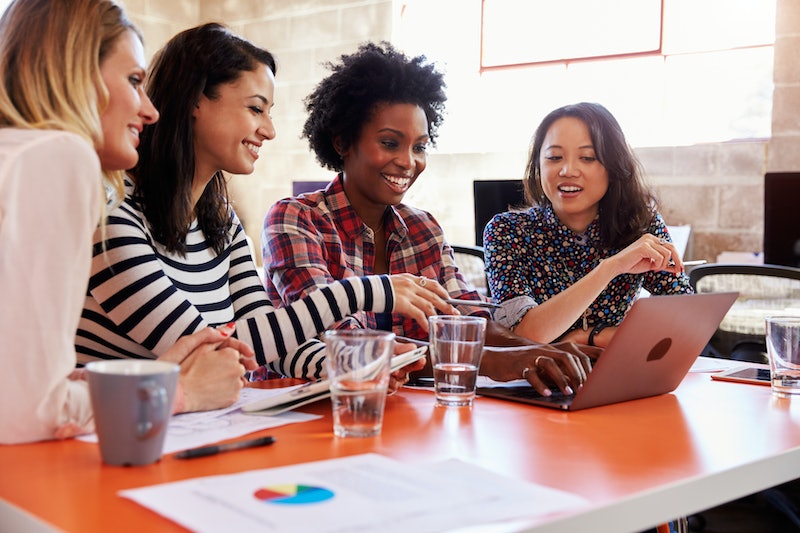 It's no secret that the tech industry isn't the most welcoming environment toward women. Female employees at tech companies often describe feeling excluded by largely male staff and belittled due to biases about women's abilities — which is precisely why the tech industry needs to welcome women more. The more women tech companies can include, the more they can battle this culture of sexism and combat the notion that women don't deserve to be there. Plus, the companies themselves will have a larger and more diverse talent pool to choose from. It's a win-win.

As it stands, women make up only eight percent of software developers, according to a survey by online coder community Stack Overflow. While some have theorized that women's brains are less suited for math and science, more and more research is pointing to cultural sources of the STEM gender gap. One study published in Sex Roles even found that the gender gap in spatial reasoning goes away when people picture themselves as stereotypical men.

The discrepancy between men and women in STEM professions isn't the natural order of things, but it's also not women's problem to correct. Women shouldn't have to put up with sexist work enviroments, and they shouldn't feel pressure to get into or stay in the tech industry to disprove gender stereotypes.

But once tech companies and society at large stop doubting women's abilities and make workplaces more accommodating for them, the gap will probably correct itself. We have a long way to go, but here are some reasons we need to start heading there.

A recent study in PeerJ found that women's code is approved more often than men's on Github — that is, unless people know it's written by women. Then, it's suddenly considered lower quality. As to why people approve women's contributions more often by four percentage points when they're anonymous, the study's authors theorized that "survivor bias" has to do with it. In other words, since the pipeline funneling women into the tech industry is so narrow, only the best of the best will make it through. So if someone has a job in tech despite all the obstacles that make it difficult for women, she's probably really good at her job.

2. Women Don't Apply For Jobs Unless They're Super Qualified

An internal Hewlett-Packard report once found that men tended to apply for promotions once they were 60 percent qualified, while women only did so when they met all the qualifications. This can likely be chalked up to the gender confidence gap, which renders women less likely to pursue their goals even when they're as qualified as men. One study in the Proceedings of the National Academy of Sciences found that STEM jobs were less likely to go to fictional candidates with female names on their resumes. But given women's tendency to think carefully about what jobs they apply for, hiring managers might actually want to consider their applications more seriously.

If a company consists solely of white men, it may only be able to serve the interests of white men. Its employees may not think about how customers of other demographics could perceive their products or services. Many women-owned tech companies are tapping into interest groups that weren't previously marketed to simply because nobody had thought about their needs. In general, recruiting people of all different backgrounds helps you find more possible approaches to problems. Social scientists call this the "wisdom of crowds" effect, and it applies to everything from guessing how many jelly beans are in a jar to brainstorming ideas for a company's next project. Several studies from Carnegie Melon and MIT even found that groups including women performed better on intelligence tests than those with only men.

4. Hiring More Women Creates A Better Environment For Women And People Of Color

Getting more women in the tech industry is a self-perpetuating cycle. If there's a woman present at a company's inception, the next women who comes in for an interview won't feel like the odd one out. And then if she takes the job, the third woman being considered will see two people she can relate to in that regard. And so on and so forth. Women in leadership positions may also be more likely to spearhead diversity initiatives, not just for gender but also for race and other identities. A study by PwC found that women board members are more concerned with racial diversity. So, creating an environment that welcomes women could help your company welcome everyone.

One big reason that the tech industry needs to be more welcoming to women is that women are harmed by its current unwelcoming environment. 60 percent of women in the tech industry have been sexually harassed, and 84 percent have bee called too aggressive, according to the survey Elephant in the Valley.A study by Fortune found that company culture was the biggest factor affecting women's decisions to leave the tech industry. If the industry continues to exist as it is, women will notwantto participate in it. And for all the reasons above, it's the companies that are missing out.