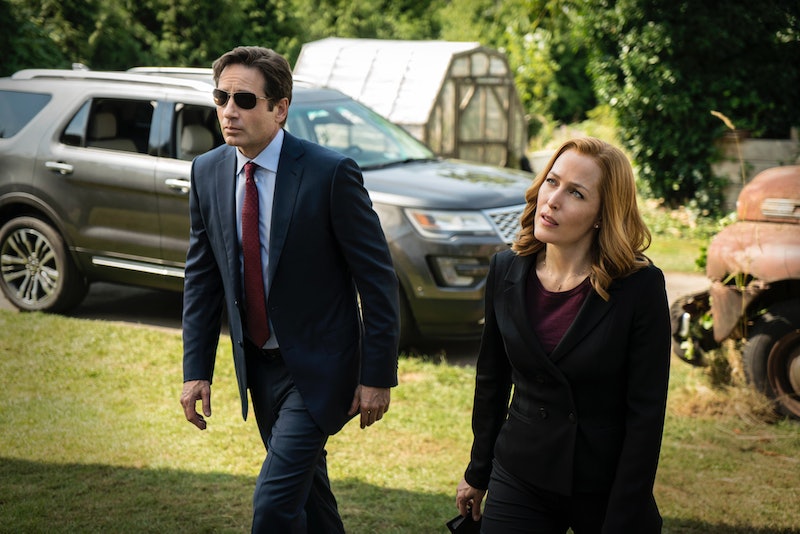 Well, fellow believers, that was one heck of a ride. I mean, I knew The X-Files finale wouldn't resolve everything, but I definitely did not expect it to end with such a massive cliffhanger that we don't even know whether our beloved Mulder is going to live to fight another day. After he turns down the Cigarette Smoking Man's life-saving offer, Mulder's in seriously rough shape from the Spartan virus that has swept across the globe. Using her own alien DNA, Scully has created what Tad O'Malley describes as a "miracle vaccine" and she rushes to Mulder with an IV. Only, it turns out the cure is not as miraculous as we thought — Scully tells Miller the only thing that can save Mulder now is stem cells from their child. You know, the one they've been talking about ad nauseam all season who I was certain would resurface in the finale. Well, he didn't — and William's location is one of my many unanswered questions from The X-Files revival.

According to Chris Carter's interview with The New York Times, The X-Files will likely return for Season 11 — but, we shouldn't expect it anytime soon due to the hectic schedules of David Duchovny and Gillian Anderson. Duchovny seems eager for the show to return — this morning he posted an Instagram photo that reads "The Truth Is On Hiatus." That's all well and good, but I'm seriously chagrined that William didn't make an appearance and, as far as we know, Mulder remains at death's door. The revival was a fun exercise in nostalgia and I'll definitely come back for more, but would it have killed Carter to give us a few answers in the finale? (Apparently the answer is yes.)

Until we receive official confirmation of Season 11, I'll be sitting here pondering these questions:

1. How does Scully still not have her own office after 23 years?

2. Why would someone as paranoid as Mulder have a phone finder app on his computer?

3. Is Mulder seriously going to die???

4. How come Scully has alien DNA from her abduction, but Mulder doesn't?

5. Are we really supposed to believe that William is piloting the alien spaceship at the end? Isn't he a little young to be flying a UFO?

6. How did Tad O'Malley somehow become the voice of reason?

7. Would a bunch of looters really just cease their illegal activities because Scully casually ordered them to stop?

8. How in the world did Miller and Scully manage to find each other within 30 seconds on a packed highway full of stopped cars?

9. Did anyone check on Agent Einstein? Someone needs to tell her to hang on, because she may be getting her own spinoff.

10. Who's taking care of Dagoo while Scully's busy saving the human race?? Are dogs safe from the epidemic? I'm concerned.

12. The guy who triggered the Spartan virus is holed up in Spartanburg, South Carolina? Really?

13. Reyes tells Scully the "plan has been in motion since 2012." Is that seriously how they're going to handle the massive plot hole that the world was supposed to end on December 22, 2012?

14. Why do Mulder and Scully look like they're posing for engagement photos rather than discussing global conspiracies?

15. Why did Reyes get more screentime than Skinner in the finale? Not cool.

17. With a UFO directly in front of her, is Scully a full-fledged believer now? Why is Einstein missing from this moment?

18. Does Chris Carter hate his fans?

19. When's the premiere date for the next revival? I just cannot quit this show.

When The X-Files inevitably returns in about 10 years, perhaps some of these questions will be answered. Until then, I'll be re-watching old seasons on Netflix and reminiscing about a happier time when our biggest concern was flying saucers.