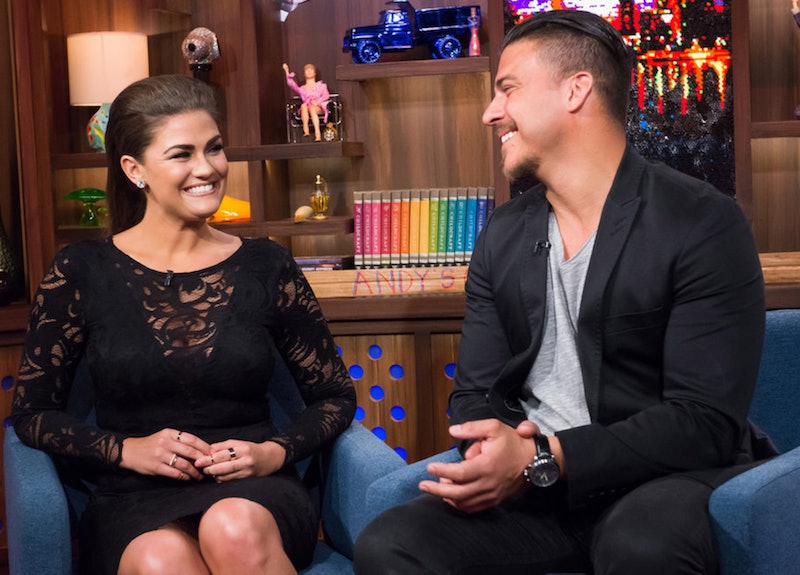 On Monday night, something huge happened. A scenario that, until only recently, I assumed was less likely than Giggy the Pom jumping up onto a bed by himself: Right after Bravo aired the latest episode of the Vanderpump Rules , Stassi Schroeder, Katie Maloney, Kristen Doute, and Scheana Shay descended upon the Watch What Happens Live Clubhouse and chatted with Andy Cohen. After the bloodbath that was last season's reunion, it seemed unlikely that we’d ever see the four Vander-ladies in the same room again, let alone watch them joke around together on live television. And yet, here we are. Vander-friends forever.

Over the course of the 30-minute episode, the quartet fielded questions about themselves, each other, Lala Kent, James Kennedy, Ariana Madix, Tom Sandoval, and, of course, Jax Taylor. The Pump Rulesstars said something about ol' Jason that really stuck with me: When asked whether they think costar Jax and girlfriend Brittany Cartwright will get married one day, the entire group said yes without hesitation. The Vander-gals added that they love Brittany, and Scheana joked that if the couple ever split up, they would keep Brittany and ditch Jax.

Guys, can we back up just a sec? Our Jaxy might get married one day. I know he's said it before, but I've yet to move on. My, how things have changed! On Monday night’s episode of Vanderpump Rules, we saw the reformed playboy tell Brittany that he has no interest in ever walking down the aisle, but apparently, our darling Vander-hero has switched his tune. And I am stoked. Sure, I am happy that Jax and Brittany are happy, I only wish them all of the happiness, etcetera.

But do you know why else I am amped? Because when I hear the words “Jax” and “marriage,” I promptly picture a Bravo wedding episode. Jax and Brittany's wedding special. Sure, the timing would have to be just right (i.e., Jax would have to propose while Pump Rules was still on the air), but I have hope. I'm confident it would be a perfect hour of TV. Something I'd tell my children's children about. It could be called Jaxing To The Chapel. Eh, that title could definitely be better. Nothing but the best for the guy who is arguably one of the greatest reality television personalities of all time.