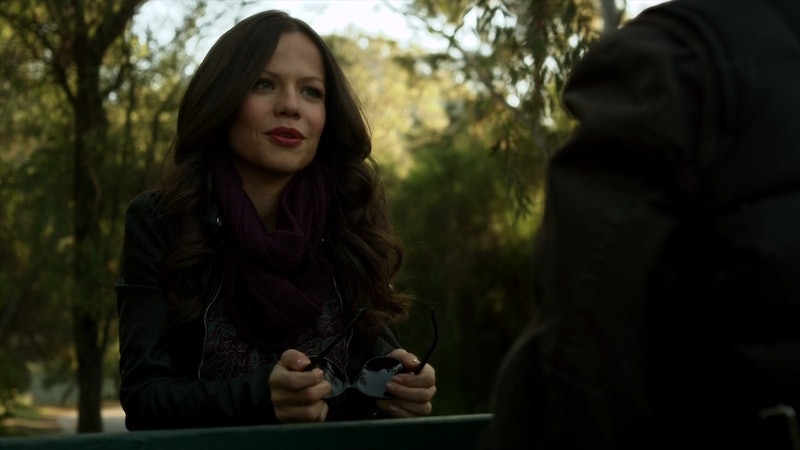 It's a good thing Pretty Little Liars fans have become pros at keeping track of multiple mysteries, because Season 6B wasted no time in presenting us with a homicide, a new Big Bad, and a whole lot of main characters engaging in mighty suspicious behavior. We recently learned an interesting bit of information that could be key to figuring out the identity of Uber A on Pretty Little Liars — according to her dad, Melissa Hastings left town in a hurry because she received a threat from the new Big Bad. Although Peter Hastings isn't the most trustworthy character, I tend to believe him this time because a flashback sequence revealed that Hanna ran into Melissa in London during the time jump. In this scene, Hanna learned that Charlotte had threatened to reveal Melissa's involvement in Bethany Young's death, which could be a clue that we need to think back to Season 1's mysteries in order to crack this new case. A key Season 1 character who has thus far been absent from Season 6 is high on my suspect list — is Jenna Uber A on Pretty Little Liars?

If Melissa was indeed the first character to receive a threat from the new A, I think we should focus on the N.A.T. Club and Bethany Young as potentially being the keys to figuring out Uber A's identity. Since we haven't heard the N.A.T. Club mentioned in a long time, here's a quick refresher — it was founded by Jason, Garrett, and Ian, which means that Jason is currently the club's sole survivor. (Where the heck is Jason right now, anyway? It's suspicious.) However, Melissa, Jenna, and Charlotte all had ties to the club.

In the Season 1 finale, Spencer gained possession of a thumb drive that contained footage taped by the N.A.T. Club. The videos showed that Ali and the Liars had been recorded through their bedroom windows and, more importantly, there was footage of Jenna seducing and threatening Toby. After she was attacked by Ian in the church, Spencer threw the thumb drive into the pews and it was later retrieved by Pastor Ted and destroyed by Ashley Marin. But, if Uber A is indeed part of the N.A.T. Club, surely there's a backup tape somewhere — every villain on Pretty Little Liars has been an absolute pro with technology.

Both Jenna and Jason have been absent from Season 6B — and we all know that a character's absence tends to mean they're up to no good. It's unclear exactly how close Jenna and Charlotte were, but they did have a friendship of sorts — and the new A is hellbent on getting the Liars to reveal Charlotte's killer. If Jenna and Charlotte were closer friends than we realized, this could definitely be an indication that Jenna is the one behind those creepy masks. Plus, in an August interview with Zap2It.com I. Marlene King confirmed that Jenna will return to Pretty Little Liars at some point. We haven't seen her face yet, but that doesn't mean she's not already back in Rosewood "hiding in plain sight."

Jenna has never forgiven Ali or the Liars for what happened to her — and her possible friendship with Charlotte would give her twice the motive to torment them if she believes they're responsible for her death. It's clear that Charlotte was able to freely make phone calls during her time in the hospital, so she could have been in contact with Jenna the whole time — and she may have provided her with a whole lot of dirt on the Liars and Melissa. Furthermore, it's become a popular fan theory that Bethany Young is Sara Harvey's twin, so it's entirely possible that Jenna and Sara have joined forces to seek vengeance on the people they believe are responsible for the deaths of their loved ones.

A whole lot of emphasis was placed on both the N.A.T. Club and Bethany Young during the early seasons of Pretty Little Liars and we've been given precious few answers about both mysteries. Unmasking Jenna as Uber A, with Sara as her helper, would be a great way to bring the show full circle as its final mysteries get resolved.