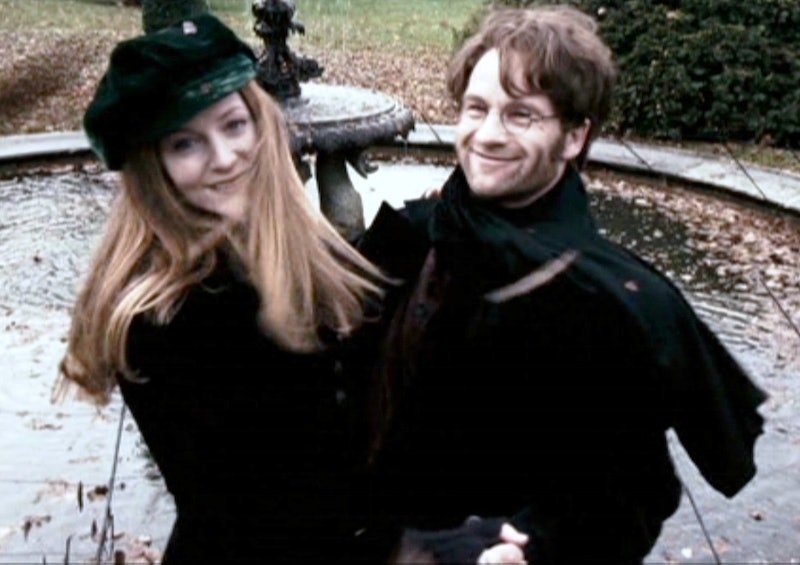 There are some pretty iconic characters in the Harry Potter series — and that includes the parents. After all, Harry is the boy who lived only because his mother sacrificed herself to save him, and that protection follows him throughout the story. The Weasleys are basically Harry’s second set of parents, and they’re a total power couple (you’d have to be a pretty great parent to raise mischief makers Fred, George, and Ginny). And even Sirius is somewhat of a parent figure, though his reign is sadly short lived.

A mother herself, J.K. Rowling proves throughout the series how awesome parents can be, and how much their love gives us. This was hardly an accident. Rowling says this in J.K. Rowling and the Women of Harry Potter:

Very early on in writing the series, I remember a female journalist saying to me that Mrs. Weasley, “Well, you know, she’s just a mother.” And I was absolutely incensed by that comment. Now, I consider myself to be a feminist, and I’d always wanted to show that just because a woman has made a choice, a free choice to say, “Well, I’m going to raise my family and that’s going to be my choice. I may go back to a career, I may have a career part-time, but that’s my choice.” Doesn’t mean that that’s all she can do. And as we proved there in that little battle, Molly Weasley comes out and proves herself the equal of any warrior on that battlefield.

So obviously the parents in Harry Potter are pretty amazing, just as parents can be in real life. But how does parenting in the wizarding world compare to parenting in the Muggle world? There are a few discrepancies...

1. You Can Find Out About HP Parents' Pasts By Looking In A Pensieve

In the Muggle world, if you want to find out about your parents' past, you have a couple options: you can look through old photographs and try to piece the stories together, or you can ask them to tell you their stories. Either way, your knowledge of their past will probably be a little biased. In the wizarding world, though, you could just jump into a memory and actually see your parents' past playing out like a movie. That would be one way to get to know them.

When I was younger, if I was in trouble, my parents would give me that ~you know what you did~ smile, and I knew I would get scolded once the company left. Not so in the wizarding world. Mrs. Weasley isn't afraid to yell at her kids in front of everyone at Hogwarts, using a Howler.

Speaking of getting into trouble, is it just me or do mothers and fathers have some sort of magical intuition? It's like they KNOW you've done something you weren't supposed to, practically before you even do it. However, it's even easier to get caught in the wizarding world, because if you have Weasley's Wizard Wheezes in your pocket, Molly can just say "accio" and it flies right into her hand. No fibbing your way out of that one.

4. De-Gnoming The Garden Vs. Taking Out The Trash

The chores that your parents give you probably consist of doing the dishes, taking out the trash, etc... normal Muggle things. Wizard parents, on the other hand, will make you de-gnome the garden. I think I'd rather sign up for that on the chore chart.

5. The Wizarding World = A Small Town

In the wizarding world, everyone probably knows your parents. After all, unless you're Muggle-born, your mom and dad probably went to Hogwarts with everyone else's parents. In the Muggle world, on the other hand, you probably don't interact with everyone who knew your parents when they were younger. At least, your science teacher probably didn't hate your dad and fall in love with your mom.

Harry Potter parents are pretty trusting. They pretty much assume Hogwarts will take care of their kids, even though Dumbledore hides a super valuable stone in the castle and sets up deadly traps that students could easily wander into — such as a three-headed dog. Also, even though the Forbidden Forest is... well, forbidden... students go there for routine detention. Meanwhile, in the Muggle world, parents have to sign a permission slip for their kids to watch a PG movie at school.

7. Mrs. Weasley's Moment Vs. Your Mom's Little Moments Every Day

In the HP world, parents have lots of moments where they prove how intensely they love their children: the Potters died to save Harry, Neville's parents were tortured into insanity trying to make a better world for their son, Lupin and Tonks fought to make a better world for future generations. The list goes on and on. And maybe your mom and dad don't bust out wands and yell, "NOT MY DAUGHTER, YOU BITCH!", but you'd better believe they would if it came down to it. Because maybe Muggle parents don't have that big moment where they battle Bellatrix, but they have moments of love every single day.