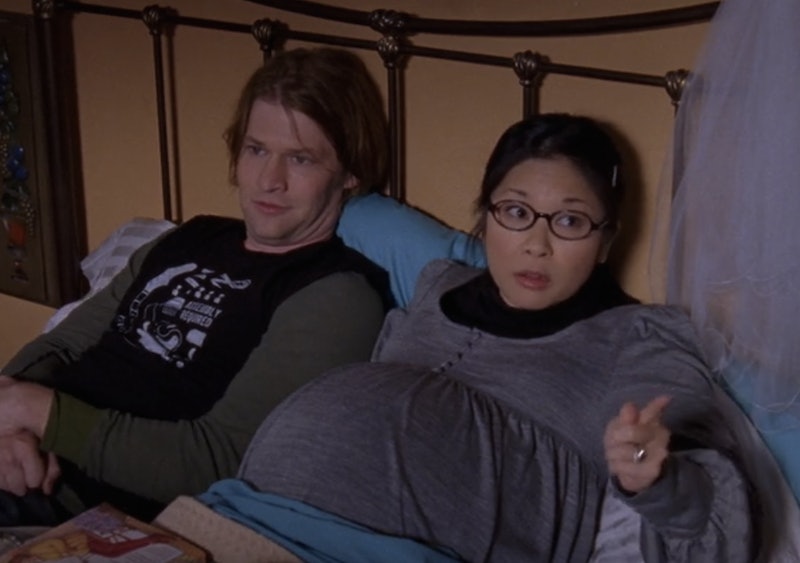 Raise your hands if you are counting down the minutes until the new Gilmore Girls reboot gets released on Netflix. We don't have an official date for its release just yet, but the sheer fact that it's on the horizon is making me want to have a harvest festival in the town square to celebrate. Now that we are on the road to nostalgia town, we can start to wonder about the little things that never got resolved in the original run of the show. For example, when we left Stars Hollow for good, Lane and Zack had just welcomed their twin boys into the world. We never got a look at the rock star spawn, though. So, what do Lane and Zacks's kids look like?

Steve and Kwan (best twin names ever) certainly have two really rad parents who both have some seriously unique genes to pass down. Since we technically can't accurately predict what exactly will result from any given reproduction without the aid of a crystal ball and some magical powers, we will have to settle with using an online baby generator. Sure, these generators can create some scary spawn but it's going to give us an idea at least. Obviously, since they are twin boys we can assume they look alike, so just double the baby face. Let's do this.

That's a seriously beautiful baby right there. Steve and Kwan are going to slay with the ladies if they come out of the womb looking that handsome.

I mean, this is everything. I am loving the random scene that they placed Steve/Kwan in, and he's actually still adorable. So far, Lane and Zack are reproducing like champions.

Um. Two out of three isn't bad. I can't really properly react to this. God help us all.

Basically, eliminating that last amorphous figure, Lane and Zack's babies are beautiful little dudes, and it will be so interesting to see them all grown up in the reboot. I wonder which one will rock Lane's signature spectacles. And will they be musically inclined? I'm psyched to find out.