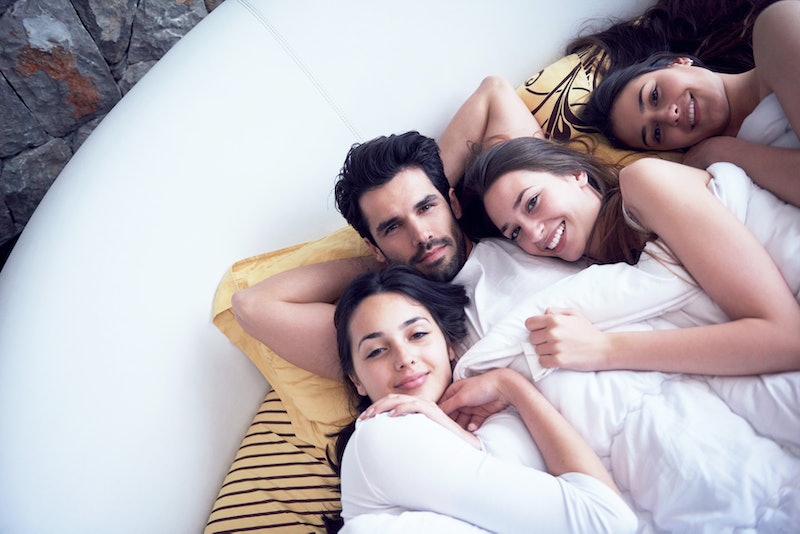 We’re always hearing that we could be having better sex, a better orgasm, or a better relationship. But how often do we hear the nitty-gritty of how we can actually better understand our deepest desires and most embarrassing questions? Bustle has enlisted Vanessa Marin, a sex therapist, to help us out with the details. No gender, sexual orientation, or question is off limits, and all questions remain anonymous. Now, onto today’s topic: how to have group sex.

Q: I recently moved to a big city known for its kink community. I’ve always been a little curious about kink, but don’t have much experience. I was recently invited to a sex party (not a BDSM one, just a singles and swingers party), and I’m debating whether or not to go. It seems like it could be a lot of fun, plus, I’m not in a relationship, so I don’t have to worry about jealousy or insecurity. But I don’t really know how I’ll react. What if it’s full of weird people? What if I get propositioned by someone who gives me the creeps? What if I freak out? Should I even go?

A: Earlier this week, I got a question from a reader who was interested in attending a group sex party. I gave her 12 tips about what to expect from her first sex party, but I wanted to follow up my answer with some more nitty-gritty specifics of how to have sex with multiple people at the same time.

Here are nine guidelines for having group sex.

1. Be Clear About The Type Of Party You're Attending (Or Throwing)

“Group sex” can mean a lot of different things. If you're throwing a party, are you all wanting to have sex with each other, or simply in the same general vicinity as each other? Some sex parties have specific themes, like trading partners, "gang bangs," or planned performances. Make sure everyone is on the same page about the plans for the evening. I know it can feel awkward to talk about logistics in such detail beforehand, but it really will make for a better experience. Talk about the details over email, at the very least.

If you're going to an organized sex party, email the organizers of it to find out about the theme and rules for the event before you go.

If you're throwing your own party, you'll learn how funny and awkward getting a group sex party started can be. Even with everyone agreeing beforehand on what’s going down, so many people are afraid to make the first move. You end up sitting around making awkward small talk, waiting for someone to do something. If you’re feeling brave, try to get things started by saying, “alright, enough with the small talk. Who wants to come play with me?” If you’re feeling a little less bold, ask someone to come cuddle with you. Cuddling is less intimidating to initiate, and will lead to one thing or another soon enough.

Same can go for when you're attending an large, organized party, though it's usually easier to get things started there, since people around you will likely be having adventures of their own. And, as always, be sure to ask for affirmative consent!

It’s of the utmost importance to practice safe sex when you’re having sex with multiple people. If this is a pre-arranged party, you may want to ask people about the last time they were tested for sexually transmitted infections (some party organizers even ask people to show paperwork from their last test). If you’re engaging in intercourse, make sure your partners change condoms each time they change partners (no “double” dipping into different people’s holes!). The easiest thing to do is to keep a bowl of condoms, dental dams, latex gloves, (and single-use packets of lube) in a bowl in the middle of the room.

There’s no “right” way to have group sex. Allow yourself to explore different activities and configurations, and see what feels best for you in the moment. Here are some ideas to try:

5. Find The Right Group Size For You

To help you adjust to the feeling of giving to and receiving from multiple people at the same time, start off by hooking up with one person. Then move up to two, then to three, four, or however many you feel comfortable with.

6. Be Careful About Interrupting

People are naturally going to pair off at different points in the evening. If two (or three or four) people seem to have a good thing going, be a bit thoughtful about approaching. Try to make eye contact with at least one member. If they seem really into each other at the moment, wait a bit and come back later. If you get a few looks or smiles, approach and ask, “can I join you, or should I try again another time?”

Group sex parties can be so overwhelming that it’s easy to blow your load quickly. Even if you’re capable of multiple orgasms, it’s still a good idea to take your time. Spend some time just making out with a partner. Then up the ante with oral sex or intercourse. Then go back to something tame like cuddling or watching. Trade off between partners too, if you feel like it. Making lots of changes will give the evening a nice ebb and flow.

8. Be Prepared For FOMO

Group sex can bring up a lot of feelings! One of the realities of group sex is that you’re not going to be able to be a part of everything. You’re going to have moments where you see something really hot going on without you. Or there will be a really hot guy or girl who isn’t paying much attention to you (and lots of attention to someone else). Maybe you ask someone to play, and they politely turn you down. You might feel jealousy, anxiety, or insecurity. Yes, you can feel like the last kid picked for dodgeball even in the midst of an orgy. Try to sit with the feeling and accept it, but try not to let it overwhelm you.

Similarly, other people’s feelings might get hurt too. You don’t have to hook up with anyone that you don’t want to hook up with, but try to be sensitive and kind to everyone at the party. If you’re hooking up with multiple people at the same time, try to look everyone in the eyes and give them a little bit of personal attention. This is particularly important in a threesome; if you and another person are going at it, make sure you don’t leave the third person out. Touch and kiss them too, or tell them, “we’re going to get to you in a minute.” If someone asks you to play, but you’re not interested, turn them down gently. If you see someone hanging out at the fringes of the party, take a moment to ask them how they’re feeling — you can still be platonically friendly.

Take care of each other, and have fun!

More like this
Are Leo & Capricorn A Good Match?
By Kristine Fellizar
Expert Tips For Being On Top When You're Plus-Size
By Lexi Inks
What Is The Forest Personality Test? The TikTok Trend, Explained
By Georgina Lawton
Are Leo & Leo Compatible In A Relationship?
By Kristine Fellizar
Get Even More From Bustle — Sign Up For The Newsletter