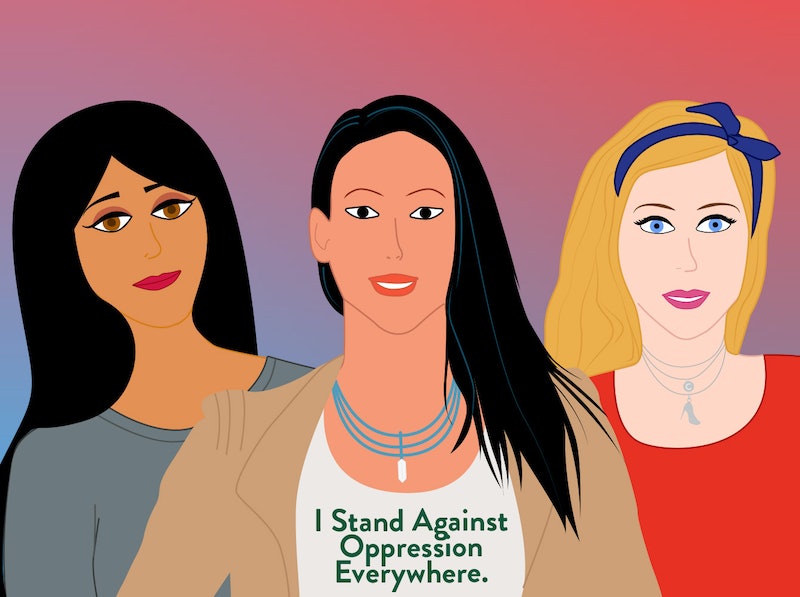 Although cats will always be the Internet's first love, reimagined Disney Princesses have turned out to be a surprisingly strong contender for our adoration. Artists have imagined the ladies of the Disney pantheon as Millennials, Renaissance paintings, horror movie characters, and much more — but what about who the Disney Princesses would vote for? Between "loyalty pledges," memes alleging that Ted Cruz is the Zodiac Killer (which I think we can safely say is not the case), and the obsession with the size of Donald Trump's hands (and other body parts), the 2016 campaign for the presidential nomination is already so outlandish that it seems fictional. Speculating about our fictional childhood heroine's voting habits is just keeping with the theme at this point.

After all, the Disney Princesses we know and love wouldn't be the type to weather the bizarre state of American politics quietly. Part of the reason the characters remain so popular even among adults is that we see ourselves in them, and the Millennial generation certainly isn't quiet about our political engagement. If they were real, there's no doubt that Pocahontas, Mulan, and Esmeralda would be on the front lines protesting cultural appropriation and deforestation, and you can bet Tiana would spend her precious free time volunteering for her chosen candidate. Of course, there's also the fact that most Disney Princesses are, well, princesses, and as such, they're pretty much required to keep an eye on politics — and no doubt they'd all be as shocked as the rest of us by Trump's continued popularity.

Well, except one, but we'll get to her later. And so, without further ado, let's distract ourselves from the increasingly strange antics of the 2016 presidential candidates by wildly speculating who the following Disney Princess would stand behind on election day.

It's probably safe to assume that Tiana is socially liberal, but she's also a small business owner, which isn't a demographic known for its liberal voting habits. Although polls have shown that many small business owners support Trump or Cruz, Tiana doesn't seem the type to go for the ultra-conservative candidates. That leaves her with pretty much one option: John Kasich, whose conservative economic views are accompanied by (slightly) more moderate social platforms.

Mulan epitomized "girl power" before it became the norm for Disney princesses, challenging rigid gender roles during the Han dynasty at the risk of her life. She may have refused an offer of political office from the Emperor of China, but she would certainly applaud any woman with lofty aspirations, especially given Hillary Clinton's long, if complicated, relationship with China. Hands down, Mulan would vote for Clinton.

Although Pocahontas may have fallen for the Englishman John Smith, her first love was the world around her; after all, that's what she and Smith bonded over before they ever spoke. If Pocahontas were alive in the modern day, she'd almost certainly be a staunch environmentalist and liberal. Although she may lean toward Bernie Sanders for practicality's sake, she may end up following her heart and voting for Jill Stein, the 2016 Green Party candidate.

Known for her fierce independence, Merida challenges social norms without batting an eyelash. There's no way she'd vote Republican — far too traditional — and while she may like to see a woman in the White House, she'd probably be turned off by Hillary Clinton's ties to the political machine. In contrast, Bernie Sanders' long-term commitment to his views and general (adorable) weirdness would probably appeal to the princess.

Jasmine may have started out locked up in a castle like every other princess, but she didn't stay that way for long. As a princess, Jasmine is no doubt familiar with the everyday sexism hurled at women in positions of political power, and like Mulan, she'd probably respect Clinton for her ambition. Furthermore, as a politically-savvy woman herself, she'd be drawn to Clinton's extensive, mostly well-regarded experience as Secretary of State.

Cinderella embodies the American Dream: She worked hard, didn't complain, and managed to rise to the top of the social hierarchy (through literal magic). It's the quintessential rags-to-riches story — the same kind on which Donald Trump is running his campaign. In keeping with the decade in which she was created, Cinderella is best described as go-with-the-flow, and she seems perfectly content to adhere to traditional expectations. Let's face it: She'd probably be taken in by Trump's bluster despite his problematic views, but she wouldn't be the only one.

We'll never know who Aurora would vote for, because she'd sleep through the polls.