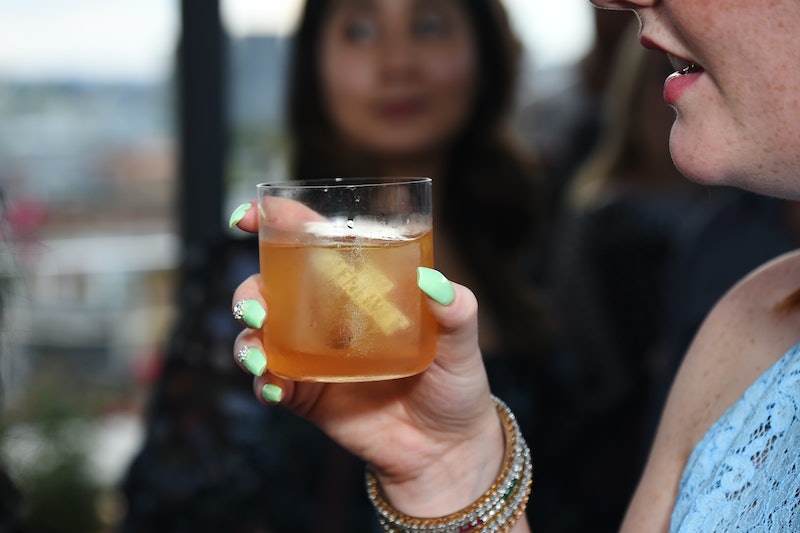 Obviously, I'm not suggesting diet should replace medication and therapy where depression and anxiety treatment are concerned. Your diet can, however, be one less thing triggering your anxiety and depression if you know which foods could be putting your mental health at risk. Unfortunately, most of the foods that make anxiety and depression worse are the really fun ones. In fact, in my case, they're the foods I most want to eat especially when I'm feeling anxious and/or depressed — because they're freaking delicious. No matter how tasty they are, though, these foods just aren't worth the mood issues they can cause.

Here are seven foods to avoid if you're struggling with depression and/or anxiety:

1. Coffee And Other Caffeinated Drinks

Coffee can be good for us, but it's also been well documented that caffeine can increase anxiety. I'm sure this isn't news to you, because you've probably experienced coffee-induced jitters before — but I'm going to cover it anyway. If you suffer from anxiety, too much coffee will absolutely make your anxiety worse.

Although drinking coffee in moderation probably won't cause you to have an anxiety attack, it's important to limit your caffeine intake as much as possible. As Everyday Health put it, "caffeine stimulates your 'fight or flight' response, and studies show that this can make anxiety worse and can even trigger an anxiety attack." So, if you love coffee as much as I do, start by limiting yourself to one or two cups a day. If you still feel like coffee is contributing to your anxiety even after you've cut back, consider switching to decaf. I know, I know, decaf is tantamount to blasphemy for true coffee-lovers, but it could make you feel a whole let better.

2. Fried Chicken And Anything Else That Has Been Fried In Hydrogenated Oils

As much as I hate to say this, if you're fighting depression, you need to stay away from fried chicken, fried mozzarella sticks, French fries, and anything else that's been fried in hydrogenated oils. You also need to avoid saturated fats, like those found in deli meats. The things is, hydrogenated oils and saturated fats can clog you arteries and limit blood flow to the brain. Not only is this terrifying for your health in general, it's really bad for your mental health. You need optimum blood flow to your brain to fight depression, so avoiding foods that could hinder blood flow is crucial.

3. Hot Dogs And Other Processed Foods

OK, so I think we all know that hot dogs aren't the healthiest foods out there. I mean, what are they really made of even? That said, beyond their questionable status as America's favorite mystery meat, hot dogs — and all processed meat for that matter — have been shown to contribute to depression (not to mention, cancer). So, if you're at a ball game and you really want a hot dog, that's probably fine. Keep your processed foods to a minimum, though, or your mental health will suffer.

Though you might think drinking will help you feel happier when you're depressed, it will likely only make your depression worse. Not only is alcohol a natural depressant, it can also interfere with the effectiveness of certain anti-depressants. One possible exception to this rule is red wine, but you should probably still be careful with the stuff.

Although Prevention reported back in 2013 that red wine can actually help fight depression, we've established that alcohol in general can make depression worse. If you suffer from both anxiety and depression, then you should know red wine can contribute to anxiety.

Red wine might chill you out for a little bit, but too much of the stuff can result in dehydration, sleep problems, and blood sugar swings — all things that tend to make anxiety worse. So if you're dealing with both depression and anxiety, I'm not saying you should never drink red wine or other alcohol again (because I'm definitely still going to), but moderation is key.

Fat-free foods may seem like the healthier option, but they're really not. Many fat-free foods are chock-full of sodium, which can mess with your neurological system. On top of that, fat-free foods can inhibit your body's serotonin production, and serotonin is super important for both overall health and mood. Plus, a super salty diet can cause bloating, which never helps with anything.

While sugar highs might relieve your depression temporarily, the impending sugar crash that comes after eating a bunch of candy will leave you feeling way worse than before. In fact, Psych Central reports that consuming refined sugars puts you at greater risk for depression. On top of that, "sugar hangovers" have been linked to energy depletion, too. So, as delicious as they are, try to take it easy on the Sour Straws.

Personally, I'd rather opt for no sweetener or sugar in my diet than drink or eat anything with aspertame in it, because to me, aspertame tastes like crap. (I once vomited after accidentally drinking a diet soda that I thought was regular — that's how much I hate the stuff.) Artificial sweeteners should be avoided for more important reasons than taste, though. Research suggest that aspertame can cause neurological problems that may lead to increased irritability and depressed mood. They can also mess with your brain's serotonin production. So if you're fighting depression, stay away from artificial sweeteners.

More like this
Got Brain Fog? Here Are The Best Supplements For Memory & Cognition
By Carolyn Steber
This Psychological Effect Might Be Keeping You From Hitting Your Goals
By Lexi Inks
Wondermind Just Launched A Site That's All About Supporting Mental Health
By Carolyn Steber
The 5 Best SLS-Free Toothpastes, According To Dentists
By Amy Biggart and Danielle Calma
Get Even More From Bustle — Sign Up For The Newsletter