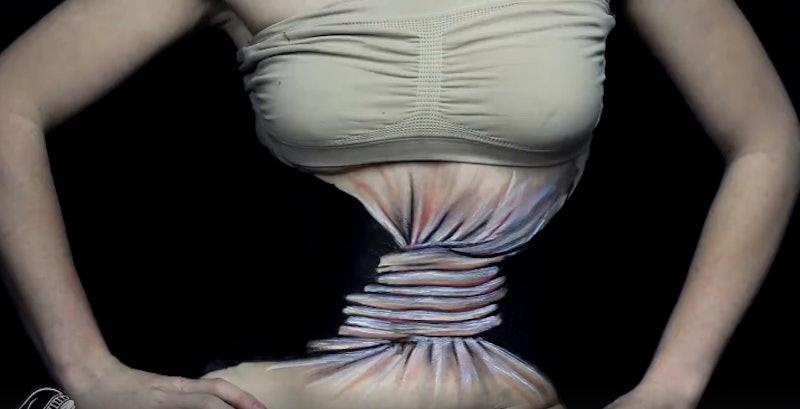 Much has been written about struggles with body image in the modern day, but Jody Steel's "Body Image" video speaks volumes without saying a word. Less than two days after the artist posted it on her Facebook page, the video has acquired more than 64 million views and renewed an online discussion of learning to accept one's body in the face of increasingly unobtainable beauty standards.

Steel is no stranger to going viral; her body painting videos, which range from Star Wars fan art to a replica of the Mona Lisa, regularly make the rounds on social media whenever a new clip is released. "Body Image" is a departure from Steel's typical subject matter, but it certainly struck a chord with viewers. In the time lapse video, Steel paints a tight coil on her midsection, as if her stomach is literally twisted into a knot. The resulting image is the so-called ideal hourglass figure taken to the extreme, Steel's waist appearing barely wider than her hand while she works.

Although the image is reminiscent of waist trainers and corsets, Steel pointed out to SELF magazine that the video isn't just intended to address the oft-discussed pressure for women to be thin. "It’s about being healthy and being comfortable in your own skin. Any weight extreme is a challenge," she told SELF.

In short, the video is less about the specific expectations we face as both men and women, and more about their emotional ramifications. Steel's twisted stomach could be interpreted as a representation of the contortions we put ourselves through in an attempt to achieve the "perfect" body — an ideal based on beauty standards that change seemingly every day.

"There have been times I've look in a mirror and wished for a perfect figure... Once I realized that naturally, I don't have a [soda] bottle figure, or long and thin legs, I began to let go of the pressures I've felt to fulfill an image that our society has deemed the pinnacle of beauty," Steel wrote in a Facebook comment not long after the video went viral.

The response has been overwhelmingly positive, many viewers leaving supportive comments and admiring her representation of the struggle. As always, however, people are terrible, and body shaming quickly reared its ugly head. Steel told SELF that she's been called too thin, and she took to Facebook again to address those who criticized her for supposedly encouraging unhealthy habits by telling viewers to embrace their bodies. (That, my friends, is concern trolling at its finest.)

"For those who've implied that I'm saying you shouldn't still strive for being healthy, that's not true at all. I do still work towards goals, but not towards body image goals that are unrealistic for my body type. I'll never be able to have model long legs or large breasts genetically. But I've set realistic goals for myself and that's the point... There's a balance," she wrote.

In a perfect world, she wouldn't have needed to shut down the haters; by what logic is encouraging a healthy body image something to criticize? Of course, in an even more perfect world, she wouldn't have created "Body Image" at all, because we would all be happy with the skin we live in. Unfortunately, we're stuck in this world — but at least we have artists like Steel to remind us that our bodies are just fine the way they are.

More like this
What’s The Kibbe Body Type Test That’s All Over TikTok?
By Marilyn La Jeunesse
How To Fight For Reproductive Rights, Based On How Much Time You Have
By Courtney Young
Sandra Bullock, Girlboss Extraordinaire
By Matt Harkins & Viviana Olen
Bustle Newsletter: May 6, 2022
By Stephanie Talmadge
Get Even More From Bustle — Sign Up For The Newsletter