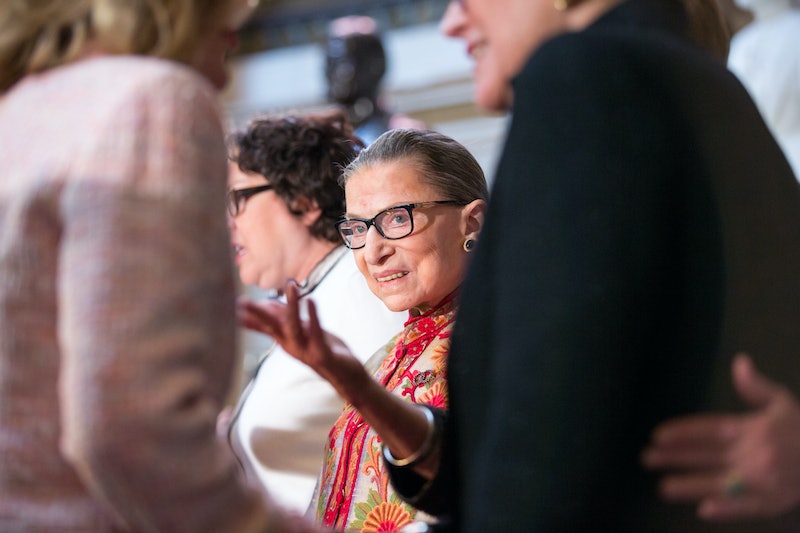 Since Simon & Schuster announced on Thursday that they will be publishing a Ruth Bader Ginsburg memoir in January 2017, rumors that RBG is retiring have been circulating. To be fair, the situation could easily lead people on to believe the justice is signaling a farewell. She's reminiscing on her career by compiling various quotes and interviews in My Own Words. On top of that, Natalie Portman will star as the infamous RBG in a film called On the Basis of Sex that chronicles the justice's younger days as women's rights activist. For most icons, such moves are a red flag for the end of a career. But, then again, Bader Ginsburg isn't like all of the others. RBG has said it once and she'll say it again: Her work isn't over just yet.

In February 2015, The New York Times' Gail Collins interviewed the justice, who insisted it was not time to step down, despite the public's criticisms. Collins noted, a little over a year ago now, how Bader Ginsburg has taken on a celebrity aura in her old age — at 82 years old, she is currently the oldest standing justice among the eight. Irin Carmon of MSNBC co-authored the cleverly titled book, Notorious RBG: The Life and Times of Ruth Bader Ginsburg, and explained how RBG is redefining what it means to be a badass. Age, for RBG, is just a number. As Carmon says in Collins' article,

The kind of raw excitement that surrounds her is palpable. There’s a counterintuitiveness. We have a particular vision of someone who’s a badass — a 350-pound rapper. And she’s this tiny Jewish grandmother. She doesn’t look like our vision of power, but she’s so formidable, so unapologetic, and a survivor in every sense of the word.

Just a month after Collins wrote the article, Ginsburg played a large role in legalizing gay marriage. The Supreme Court declared the victorious ruling on June 26, 2015. Clearly, she's still moving the nation forward. Currently, she's even less likely to step down for a few important reasons.

Firstly, the House is controlled by Republicans, making it difficult for President Obama to appoint a liberal justice to replace Bader Ginsburg. In a September 2014 interview with Elle's Jessica Weisberg, Bader explained her reasoning, and it applies to an even greater extent today:

Who do you think President Obama could appoint at this very day, given the boundaries that we have? If I resign any time this year, he could not successfully appoint anyone I would like to see in the court. [The Senate Republicans] took off the filibuster for lower federal court appointments, but it remains for this court. So anybody who thinks that if I step down, Obama could appoint someone like me, they’re misguided. As long as I can do the job full steam... I think I’ll recognize when the time comes that I can’t any longer. But now I can.

Ginsburg's resolution to remain in the Supreme Court was likely elevated by Justice Antonin Scalia's death. Her stepping down would leave Obama with two places to fill. In turn, she would run the risk of enabling a Republican-dominated Supreme Court.

Additionally, a new Supreme Court case signals that Bader Ginsburg's fight for women's right to choose isn't over just yet. In March, the Court recently heard Whole Woman's Health v. Hellerstedt which challenges a potentially restrictive Texas abortion law. To say the least, Ginsburg sounded ready to strike it down:

As I understand it, this is one of the lowest­-risk procedures, and you give a horrible from Pennsylvania, but absolutely nothing from Texas. As far as we know, this is among the most safe, the least-risk procedures -- an early­-stage abortion ... So what was ... the problem that the legislature was responding to that it needed to improve the facilities for women's health?

Since her appointment as Supreme Court justice in 1993, RBG has been advocating for women's right to choose. Now that the Roe vs. Wade decision is in danger of being compromised, we need Bader Ginsburg to do what she does best.