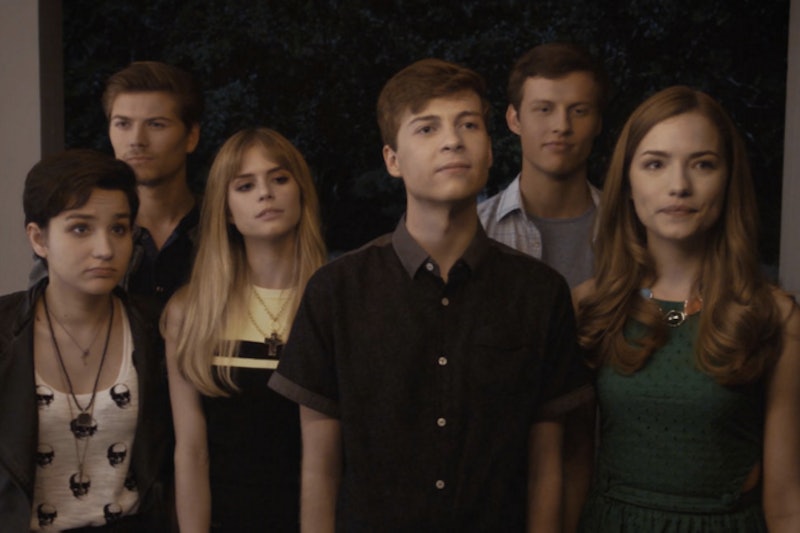 While fans might have been skeptical when they heard that Scream was being turned into a show at MTV, Season 1 showed a lot of promise. Taking pointers from Kevin Williamson's original script by featuring multiple pop culture references and fast-talking teens, the show kept people guessing as to who might be the killer in the reboot. The Mr. Ghostface mask may have undergone a redesign, but there was a lot to love in the reimagining of Scream. But who will be the killer in Scream Season 2? Are there any possible suspects to consider?

One of the best aspects of the series was the way it handled technology — the lead character's mobile ringtone sounded exactly like Drew Barrymore's landline in the original, and the obsession with movies in the original Scream was translated into video diaries and characters sharing clips shot on their phones. Add in a character recording a podcast about the murders, and you've got an update that surprisingly works, and treads new ground of its own. The only question is who will don the infamous mask in Season 2 of Scream , and are any fan favorites potential murderers? Who will survive the second season, and whose days are numbered?

Our protagonist, Emma, went through hell in Season 1 of Scream. While there were plenty of moments that should've sent Emma over the edge and turned her into a serial killer, she was always the TV show's version of Sidney Prescott, our eternal heroine. As MTV reports, in Season 2, Emma "has just returned to Lakewood after trying to recover at a retreat... Her friends and family are walking around her on eggshells and questioning whether Emma has truly gotten over the deeply traumatic turn of events — including that time she watched her boyfriend get cut in half by a piece of farm machinery." If you'd blocked out just how gruesome Season 1 was, let this serve as your reminder. Emma is sure to have been changed irreparably but these events, but it looks likely that she'll still be the character we're all rooting for when the show returns.

When Season 1 of Scream aired, Amadeus Serafini became my new crush, and probably yours too. His brooding bad-boy image, and instant chemistry with protagonist Emma, made him everyone's favorite bae on the show. While he often seemed sketchy, mirroring Sidney's boyfriend Billy in the original movie, Kieran became super loveable as the series progressed. As his dad, Sheriff Hudson, was killed off in Season 1, will revenge be on Kieran's mind? Could this be motive enough to make him the new killer?

I don't know about you, but Noah always seemed completely creepy to me. I was half-convinced he'd turn out to be the killer in Season 1, and still don't trust him. I wouldn't be at all surprised if Noah started stabbing some randos when Season 2 returns. Just sayin'.

At the end of Season 1, Audrey was seen burning letters from killer, podcaster Piper, making many people assume she was an accomplice. But what if Audrey was destroying evidence that connected someone else to the murders? While I don't buy the idea that Audrey was a co-conspirator of the Season 1 murders, her innocence is sure to be in question in Season 2. According to MTV, Audrey is "being harassed by someone who knows the truth."

As MTV states, "fan favorite Brooke (Carlson Young) is now officially dating Jake (Tom Maden)," meaning that she's no longer illicitly seeing her teacher Ezra Fitz... I mean Mr. Branson. However, "the two are keeping their romance a secret from her father, the we-still-think-he’s-shady Mayor Maddox." Could Jake's father be involved in the murders, putting Brooke at even more risk now she's seeing Jake? While it's unlikely either of these two are the killer, they're sure to be at the center of the drama.

In a way, Emma's mother Maggie was responsible for all of the murders in Season 1. As a teenager, she'd gotten pregnant with a baby, fathered by the town's outcast and owner of the Scream mask, Brandon James, and given the baby up for adoption. That baby, Piper, came back to town and caused havoc. Will there be more repercussions on Maggie for the decisions she made in the past? Will she be driven to exact a revenge of her own?

As MTV notes, there will be several new characters in Season 2 of Scream , and any one of them could be a killer.

While we wait for the new series of Scream to finally air in May 2016, it's time to re-watch Season 1 and start working on those theories now.

More like this
Kate Winslet To Star In Russell T Davies' 'Dark Season' Revival
By Sam Ramsden
'Bel-Air' Season 2 Finally Has A Release Date & A New Trailer
By Brad Witter, Kadin Burnett and Sam Ramsden
How The Thanksgiving Episode Of 'Gossip Girl' Changed Pop Culture History
By Gabrielle Bondi
'Gilmore Girls’ Lauren Graham Just Revived Our Hopes For A New Reunion
By El Hunt
Get Even More From Bustle — Sign Up For The Newsletter