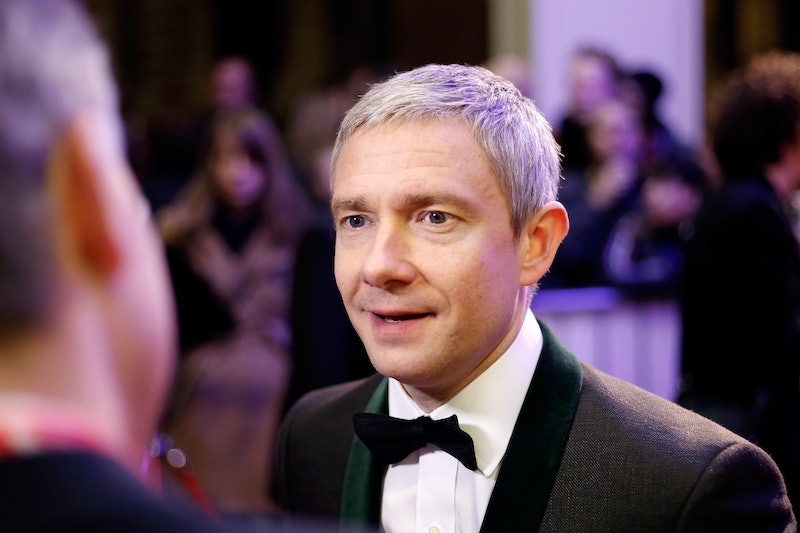 that only bears one superhero's name, it sure seems like everyone and their mother will be making an appearance in May's Captain America: Civil War , doesn't it? The latest film from the Marvel Cinematic Universe doesn't even fall under the banner of an Avengers team-up, and yet the cast list contains 13 characters pulled from various Marvel franchises both well-known (Robert Downey, Jr.'s Iron Man) and obscure (William Hurt's Incredible Hulk character General Ross). And then there's the NEW characters that will be introduced in the sequel, including Tom Holland's Spider-Man, Chadwick Boseman's Black Panther, and Martin Freeman's… mystery character.

Although the casting of the Fargo/Hobbit/Sherlock star was announced in May of last year, his role in the film wasn't revealed until this week's issue of Empire magazine. According to the publication's recent cover story, Freeman will be portraying Everett K. Ross, a character pulled directly from the pages of Marvel comics. But just who is Everett Ross, and what does that mean for Freeman?

Interesting, Everett Ross is a character that is known more in connection with T'Challa (aka Black Panther) than Steve Rogers (aka Captain America). First introduced in the pages of Ka-Zar — an obscure, Tarzan-like "Lord of the Jungle" — Ross quickly became a mainstay of the Black Panther series, first joining forces with the Wakandan superhero in November of 1998.

In the comics, Everett Ross is an employee of the U.S. State Department who becomes ambassador to the fictional African nation of Wakanda (T'Challa's home country). Over time, he became one of the superhero's most reliable sidekicks, assisting him in various operations, facing off against his foes like Mephisto and Killmonger, and even being put in charge of Wakanda as Regent in T'Challa's absence.

Although we now know the identity of Freeman's character, it's still up in the air as to how faithful of an adaptation his version of Everett Ross will be. While in the comics Ross is a faithful good guy, Freeman has already given hints that his character's motivations may not be so pure: "You’re not quite sure which side he’s on," he told Entertainment Weekly last summer. "It looks a little bit like he’s playing one game when, actually, he’s playing another. It’s the kind of character I like because it’s ambiguous and because you don’t know whether he’s, you know, good or bad."

We already know at least one way that Civil War will deviate from the comics in terms of the character's origins: Empire's report also revealed that when we first meet him, Everett Ross will be working not for the State Department, but for the

Counter Terrorist Center. (Sounds like the M.C.U.'s version of 24's CTU. Paging Jack Bauer?) Additionally, the fact that Hurt's Gen. Thaddeus Ross is being re-introduced to the M.C.U. eight years after The Incredible Hulk in the same film that will introduce Freeman's Everett Ross is highly curious. In the comics, Thaddeus and Everett are not related… but will Civil War change that? (Technically, 65-year-old Hurt is old enough to be 44-year-old Freeman's father if he had him when he was only 21.)

Whether Freeman turns out to be playing the good guy comics fans know and love or a slightly shadier character, we know one thing for certain: he'll be around for a while. In an interview with Entertainment Weekly, Marvel Studios president Kevin Feige revealed that "Some of [the Civil War characters] play larger roles than others. And in some cases there are some you will meet ever so briefly in this film and then will be expanded upon in future films. [Freeman] falls into that latter category."

Now that we know exactly who Freeman is playing, we can make a pretty solid guess on which "future films" he'll be showing up in — namely, 2018's solo superhero

Black Panther. And once again, Marvel proves that it has no equal when it comes to seeding its films with Easter Eggs that lay the groundwork for movies that are still several years down the line. (We already met Black Panther villain Ulysses Klaue in last summer's Avengers: Age Of Ultron, played by Andy Serkis.)