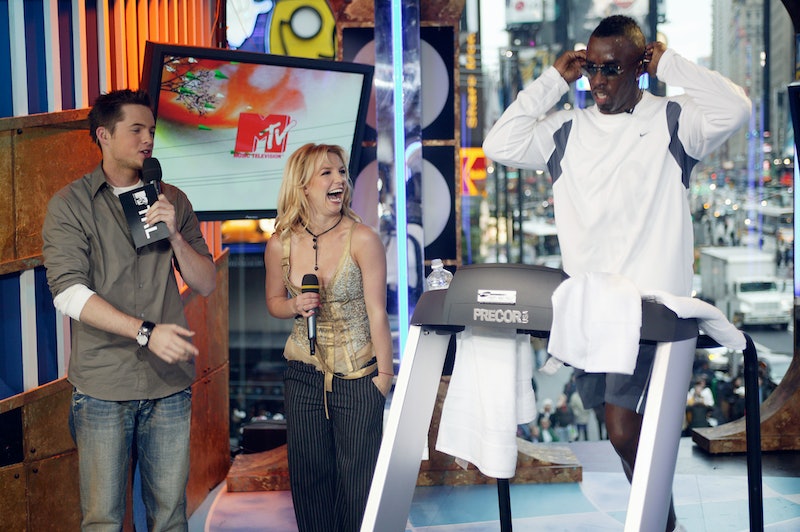 Here's a weird confession: I think about MTV's Total Request Live — aka TRL — at least once a week. If you were a preteen/actual teen in the late '90s/'00s then you can probably (or, at least partially) relate to this sentiment. Alright, fine: Maybe you stopped thinking about TRL sometime in 2002, after Carson Daly stepped down as the host — but still, you can't sit there and tell me that at one point in your life, you would have traded in your Walkman (complete with your LFO CD) and extensive collection of shell necklaces to be a member of the TRL audience.

In the '90s, watching TRL was the spot to be after school. TRL played the top 10 most requested music videos of the day, Monday through Thursday. And the best part was that you — yes, little old you! — got to make the call about which videos were worthy and which ones were not. Because viewers voted for their favorite videos via phone (vintage) or online. What made this all even better though — what really was the proverbial cherry on top of this musical sundae — were the special guests. Not only did you get to witness your favorite artists's music videos, you got to witness your favorite artists perform live, do weird things, and answer your most burning Q's. As a result, there were a lot of moments every '90s kid wished they could have been at TRL to witness firsthand.

Luckily, they've at least been immortalized on the Internet.

1. When The Backstreet Boys Sang "I Want It That Way"

Everyone in the audience is crying. I'm crying. You're probably crying.

*Cue the nonsensical lyrics of "MMMbop" getting stuck in my head*

TRL got so real that day.

4. When The Newlyweds Performed This Duet

This is the most sensual thing I've ever seen.

#TBT to the Spears and Joan Heart collaboration.

8. When Britney Spears Performed "Oops!... I Did It Again"

Honestly, I think this list could solely be composed of Britney Spears TRL moments.

9. This Awkward Moment Between Eminem and Mark Wahlberg

The shade! Marky Mark does not want to be anywhere near and/or around this funky bunch.

10. When Puff Daddy Ran On A Treadmill For An Entire Episode

Back when he was still called P. Diddy.

This performance was perfect.

This was the theme song to what felt like ever single teen rom com in the '90s.

13. When Robin Williams Was Just His Amazing Self

14. When Outkast Performed "Hey Ya"

The unofficial soundtrack to 2003.

The Xtina we all grew to know and love.

17. When Avril Lavigne Was So Shy

In the most adorable and humble way.

19. When Mandy Moore And Shane West Were On Together

Before the Queen reigned.

21. When Heidi Montag Tried To Freestyle

At least she tried?

I think we're all on the same page here. MTV, bring back TRL. Please?

More like this
Netflix Reveals First Look At Wednesday In The 'Addams Family' Spinoff Series
By Bustle Editors
Kenan & Kel Just Reunited At The 2022 Emmys & Twitter Is Overjoyed
By Grace Wehniainen
15 Offensive AF Jokes In 'Friends' That Really Aren't OK
By Tolly Wright, Bustle Editors and Meguire Hennes
A New 'And Just Like That' Table Read Pic Confirms A Key Character's Return
By Jack Irvin and Grace Wehniainen
Get Even More From Bustle — Sign Up For The Newsletter