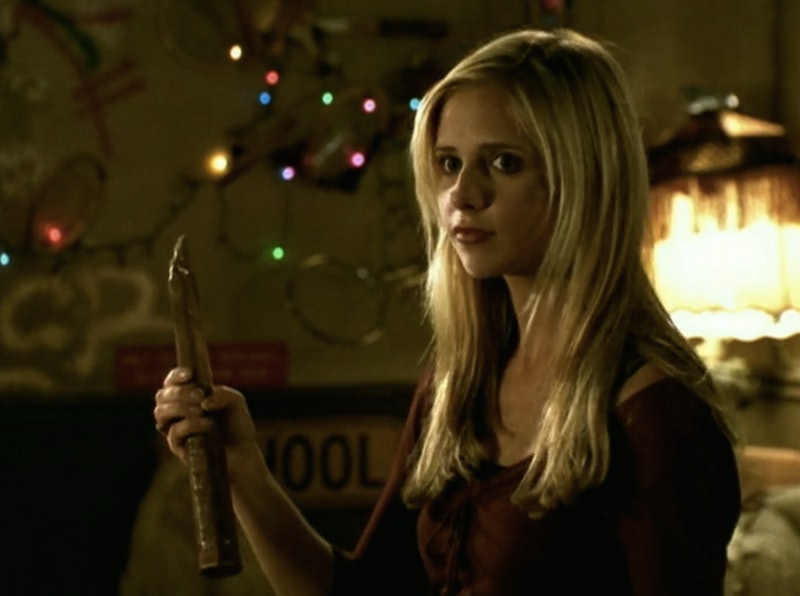 From the moment it premiered on The WB on March 10, 1997, Buffy the Vampire Slayer existed to teach me how to be powerful. I mean, OK, a primeval physical strength wasn’t something I could just learn. But I cycled through the series enough times to adopt a Summers-esque cadence to the way I speak, a sarcastic lean that made people think I sounded akin to the Slayer herself (um, like at least four times). And now you can, too, with these repurposable Buffy Summers quotes for everyday life!

See, even if you don’t have a scythe-sharp wit in your arsenal, you have the Internet at your fingertips, and our girl won’t mind if you co-opt a few of her lines. Honestly, I think that every young woman should have a few Buffy lines at hand when confronted with mundane annoyances, so let’s start with a quick selection of favs. Pretty soon, you’ll be known as the Buffy-Quoting Chick, having out-Buffed your enemies with all of your classic Buffy Speak.

But I don’t want to torture you and wait any longer. Scroll down to find all the Buffy quotes you may need for your day to day struggles. May they help you in your fight against vampires, demons, the forces of darkness, and maybe your landlord.

1. When You're At A Graduation Ceremony With Seven Commencement Speakers And You're On The Sixth

Seriously, though? How is there not a five minute limit on these?

2. When It's 3 In The Morning And Your Friend Suggests You Go To Another Club

My God, Melanie, no, HOW ARE YOU NOT TIRED?!

3. When You're Curious Why Your OkCupid Date Messaged You In The First Place

4. When Some Scrub Follows You Down The Street Asking, "Hey, Baby, What's Your Name?"

5. When Your Best Friend Wants A Chill Birthday Dinner But You Know Your Friend Is Going To Try To Order Six Cocktails

Yeah, it's a Monday.

6. When A Friend Of A Friend Asks What You Think Of 'The Friend Zone,' And Immediately Launches Into, "I Think..."

Oh, honey, you do not want to open this Pandora's box.

7. When You Miss Free Pancake Day Because You're In Bed With The Flu

I just don't know why the universe has to be this cruel to me.

8. When Your Roommate Doesn't Understand Why She Can't Adopt A French Bulldog

Also there is no world where I wouldn't end up being the one taking care of it, let's be honest.

9. When Your Parents Make You Visit Them In Florida

If I finally just book a four-day trip there, maybe they'll stop bothering me and I can move on with my life.

10. When You're Going On Vacation And Co-Workers Ask How They Can Reach You During An Emergency

Short of that, I will be unavailable.

11. When You're So Hungover That It Hurts To Exist

I'm going to need some coffee before I can snark properly.

12. And When Somebody Doesn't Catch That You're Quoting Buffy the Vampire Slayer

God, you're being such a Giles right now.