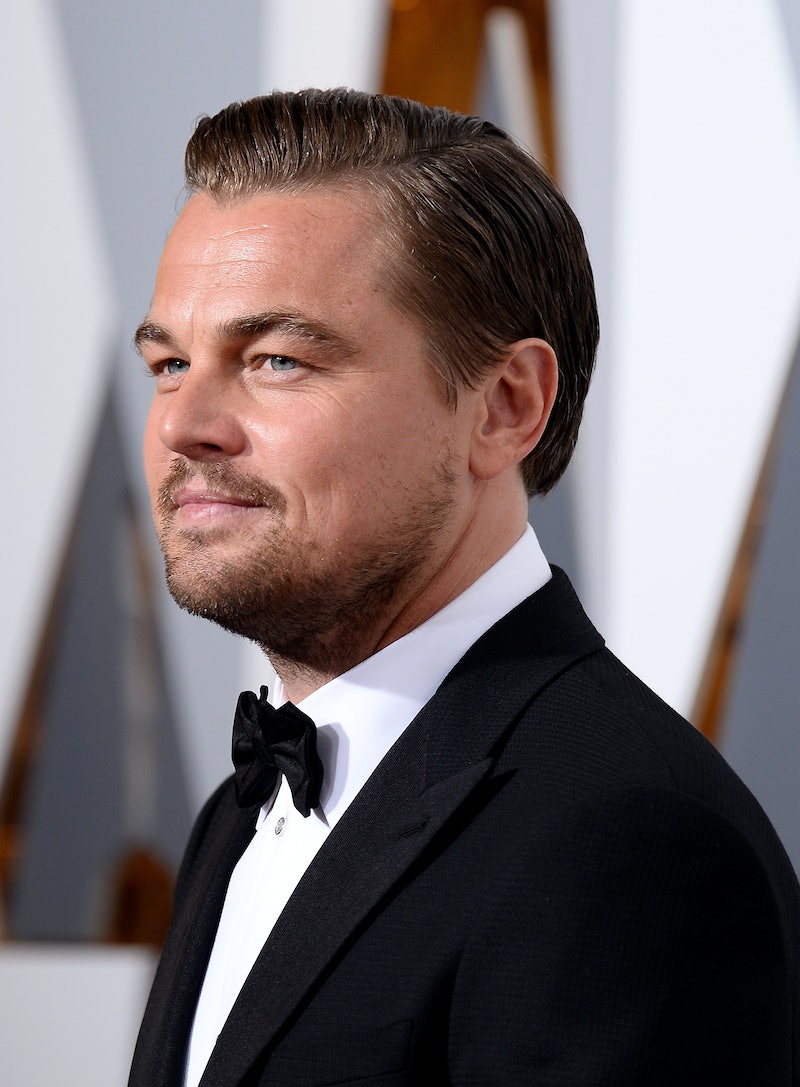 So in case you missed it, Leonardo DiCaprio accidentally became the unofficial spokesperson for Girl Scout cookies. How? Good question. Before the Oscar winning (!!!) actor DiCaprio collected his award at the 88th Annual Oscars Ceremony on Feb. 28, he — like the good samaritan he is — bought a box of Trefoils. He consumed them, looked pleased with his purchase, and life went on. But, not for the Girl Scouts of Suffolk County, New York. They had bigger plans. As in, they used DiCaprio's candid Girl Scout Cookie-touting photo as a way to promote their own troop and build sales.

The Scouts took the pic of DiCaprio in his most vulnerable Trefoil haze, slapped it on a piece of paper and added some text that read: "This is Leo. Leo wants an Oscar. Leo buys Girl Scout Cookies at the awards. Leo wins an Oscar. Leo is smart. Be like Leo." Who are these clever children and where can I find out if they will run my life for me? Anyway, after they posted it to their Facebook page, the post went viral, and just like they hoped, sales shot up. As the troop exclusively told ABC News, "It made people stop at the table to read the sign, and then we were able to ask them to buy cookies."

Naturally, this got me thinking about a collaboration. A mashup of two indisputably great things: Leonardo DiCaprio movies and Girl Scout Cookies. So here's a list that literally no one asked for, but that I think we all need: Which Girl Scout cookies to eat alongside some of DiCaprio's finest film work. You're welcome.

Bravo, Suffolk County Girl Scouts. You deserve an accolade for this.

The parallels between the Grape family and raisins are clear. But, like DiCaprio's jaw-dropping performance as Gilbert Grape's little brother, the Rah-Rah Raisins are often — and unfairly so — looked over.

Because we all know that the best way to eat Thin Mints is to freeze them first. So pop those bad boys in some sub-zero temps, and get ready to feel one millionth of the coldness Jack must have felt when Rose let go.

Peanut butter and chocolate. Some might say they go together like...Romeo and Juliet? Some might also say that Romeo was quite the tagalong and that he probably should have just let Juliet live, but OK Shakespeare, we get it. Love is tragic. So is an empty box of tagalongs.

Samoas: Catch Me If You Can

In this movie, Leonardo DiCaprio played a man who committed tons of crimes and got away with them for nearly six years. I tried to steal one Samoa from a roommate back in 2007 and she still won't speak to me. There's a connection here.

Because although it sounds repetitious (peanut butter on an oatmeal cookie that tastes like peanut butter even though it's supposed to be oatmeal?) like a dream within a dream, the Do-si-Dos are unexpectedly complex.

Indulge in all the senses of old-school Southern charm. Minus the abhorrent racism.

Does anything say "superfluous money" and "irresponsible behavior" like a cookie named Dulce de Leche? The hedonism is palpable from here.

More like this
You Can Thank 'Spider-Man' For The Meme-ification Of Movies
By Dana Schwartz
The 'Hocus Pocus' Sequel Finally Has A Release Date & It Makes Total Sense
By Shannon Barbour and Radhika Menon
Watch The Dramatic First Trailer For Netflix's Jennifer Lopez Documentary
By Alyssa Lapid
What Does Doctor Strange’s Third Eye Mean?
By Arya Roshanian
Get Even More From Bustle — Sign Up For The Newsletter