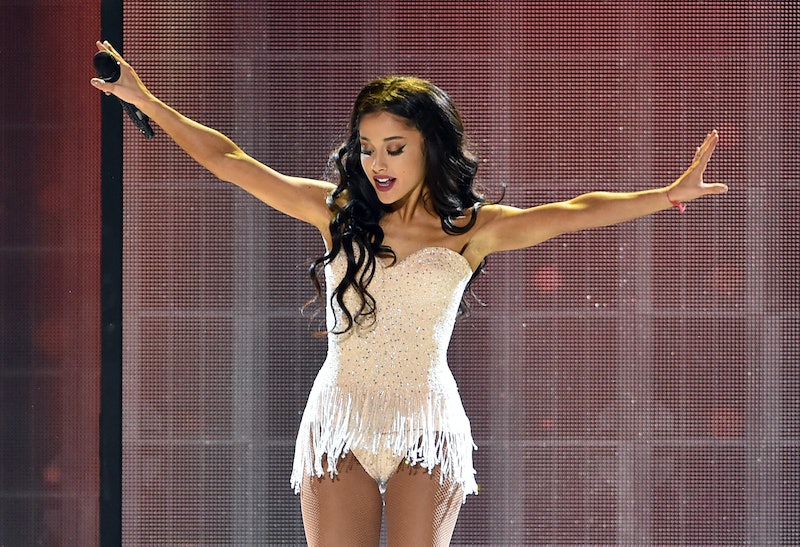 Ariana Grande has already made your Friday infinitely better by dropping her new single "Dangerous Woman" — but now the question is, is Ariana Grande's "Dangerous Woman" on Spotify? Luckily, that question is as simple to answer as it is to ask: Because Grande sympathizes with your replay needs, her new single is indeed available on the streaming site.

This is amazing news, of course — with many artists choosing to either delay Spotify releases or forgo them altogether, it is a huge relief to streaming fans to see Grande is embracing the site. It makes life a lot easier for those who want to put "Dangerous Woman" on the loop it deserves, surreptitiously learn all the words to the track by the end of the day, squee over Grande's deliciously old school new sound, and bask in its sultry, pop goodness as many times as they want.

"Dangerous Woman" is the first and title track off Grande's third album. Dangerous Woman will debut in its entirety on May 20, but if you need immediate assurance that you will have complete access to the album the minute it is released, you can pre-order it now on iTunes. In my opinion, it's definitely worth it — if the first track is any indication of what the rest of the album holds, this is a more grown-up Grande, and that in and of itself is totally compelling. Both her voice and her lyrics have matured, and the results are spectacular.

Grande's fans are clearly loving the new anthem to being so good it feels bad. The track was just released Thursday night, and — as Grande excitedly pointed out on Twitter Friday morning — it has already hit number one on the iTunes charts. As you can imagine, the "Dangerous Woman" singer was proud of her devotees:

If you prefer to stream your music, head over to Spotify ASAP, or just click the button below and bask in the joy of new Grande. "Dangerous Woman" may be Grande's best song yet, and just listening to it once is not an option, my friends.

More like this
After 'Heartstopper' Used This Indie Artist’s Song, Streams For It Soared 8,000%
By Alyssa Lapid
How The City Healed Five Years On From The Manchester Arena Attack
By Ella Glover
Britney Spears Met The Weeknd & Sam Levinson, So She May Actually Be On 'The Idol'
By Jake Viswanath
Taylor Swift Knew Hayley Kiyoko & Becca Tilley Were Dating 4 Years Ago
By Grace Wehniainen
Get Even More From Bustle — Sign Up For The Newsletter