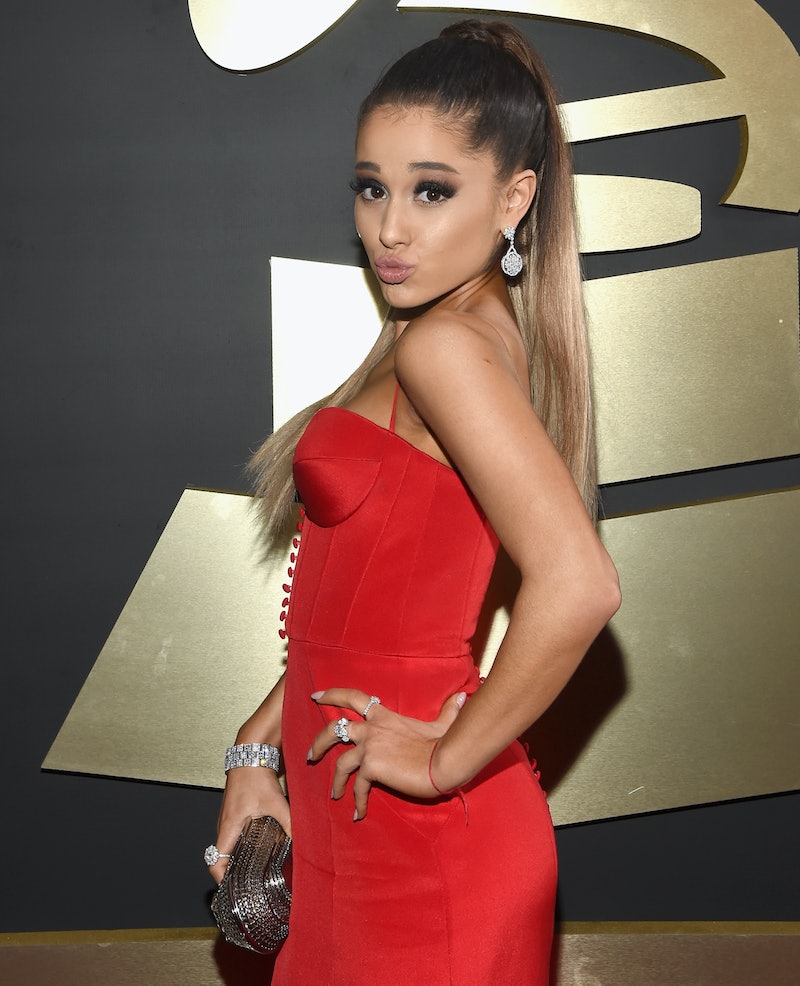 We're less than 24 hours away from the premiere of Ariana Grande's new single, "Dangerous Woman," and excitement levels have reached an all-time high. Why? Well, because a nearly minute-long clip of the song was featured during the Victoria's Secret Swim Special on Wednesday evening, and it sounds effing glorious. Believe me, I am being 100-percent for serious when I say that listening to the blissful 55 seconds of audio gave me heart palpitations... HEART PALPITATIONS! I haven't felt this pumped about an Ariana Grande tune since "Problem"!

Now, this isn't the first "Dangerous Woman" snippet the 22-year-old singer has shared with fans, but it is the most revealing. While the previous teasers didn't give us much of a sense of the track's melody or lyrics, this latest teaser allows us hear the chorus, and my oh my, what a chorus it is. "Somethin' 'bout you makes me feel like a dangerous woman," Grande belts on the soaring, anthemic hook over a killer electric guitar riff. Yes, there's an electric guitar in "Dangerous Woman," people. I repeat: THERE'S AN ELECTRIC GUITAR! Check it out below.

It definitely seems like Grande has learned an important lesson from her last single, "Focus." Shortly after its debut in October 2015, "Focus" came under fire for allegedly sounding too similar to "Problem." Instead of pushing herself to evolve as an artist, some people felt as though Grande had just rehashed a past "winning formula" in order to score another hit. "Focus" managed to reach No. 7 on the Billboard Hot 100 chart — which is nothing to sneeze at — but it lacked the staying power of many of the diva's previous releases.

So, in February, Grande announced that she'd changed the name of her upcoming third album from Moonlight to Dangerous Woman, and unveiled a series of dark and mysterious pictures on a new promotional website, DangerousWoman.com. At the time, I had a hunch that these two developments might mean that Grande had switched up the sonic direction of her next LP, and now, having heard the latest "Dangerous Woman" clip, it feels like my suspicions have been confirmed. "Dangerous Woman" doesn't sound like anything else in Grande's discography — and that's very exciting.

"Dangerous Woman" comes out on Friday. Grande will perform the song, along with another new track called "Be Alright," on Saturday Night Live this weekend.