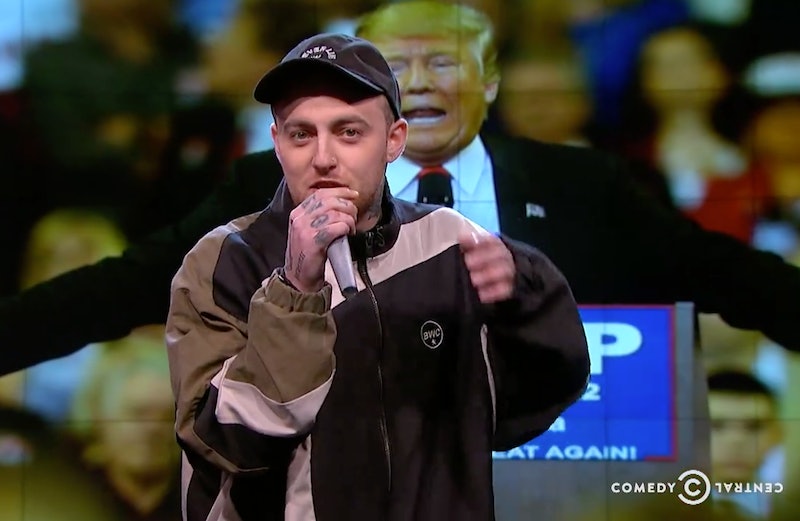 On Wednesday's The Nightly Show with Larry Wilmore, Philadelphia rapper Mac Miller had a few words for Donald Trump — and as you might imagine, they were far from an endorsement. The rapper had dropped his Billboard-charting track "Donald Trump" in 2011, which ignited a feud between the rapper and the businessman, who later threatened to sue Mac Miller for using his name illegally.

In that Twitter feud in 2013, Trump told "Little Mac Miller," "you illegally used my name for your song 'Donald Trump' which now has over 75 million hits," and, "I’m now going to teach you a big boy lesson about lawsuits and finance. You ungrateful dog!" Trump — who is very defensive about his hand size — also jabbed at the rapper's appearance, stating, "I have more hair than you do and there’s a slight age difference."

Mac Miller has been anything but silent about his views on the Republican front-runner. He has also been vocal about his support of the Black Lives Matter movement, using Twitter as a platform to inform his audience about systemic racism, posting in a rant, "Also white people, reverse racism isn't real." He ended his rant with the following message:

On Wednesday's The Nightly Show, Mac Miller hilariously opened up again publicly with the most real statements on Trump. He opened his speech with the words, "I only have one thing to say: I f*cking hate you, Donald Trump." He continued:

Mac Miller continues to "whitesplain," he said, to the "racist son of a b*tch":

He continued that he doesn't know if Trump is actually evil, or if he'll just literally "do, say, and allow anything" to stay in the spotlight a little longer. The problem with this, obviously, is that while playing into racial, misogynistic tropes on a public platform may have no affect on Donald Trump, his rhetoric is dangerous to the lives of the people he is consistently racializing.

Mac Miller called out those who threaten to move to Canada in the case of a Trump win, stating:

If we're stupid enough to elect you, I know exactly what everyone's going to say. "I'm moving to Canada. I don't wanna live in a country where Donald Trump is president. I'm gettin' out of here." You know what I'm gonna do if you get elected? I'm staying right the f*ck here ... I'm gonna be here everyday telling the world how much I hate you.

He perfectly ended his monologue with the following statement:

Watch the hilarious full clip below.