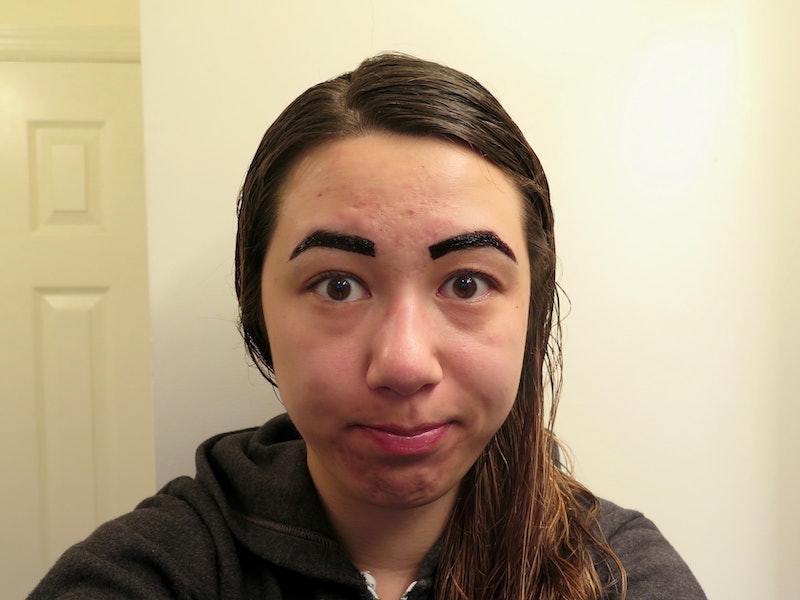 When people talk about Korean beauty trends, they're usually discussing inventive skincare techniques or products with unique ingredients. But innovation isn't limited to skincare, and one of the strange Korean makeup trends that's currently emerging is temporary tattoo peel-off stains.

The steps are fairly simple. You take a goopy gel, apply it to your face, let it dry, and then peel it off. Ideally, the color will last for the rest of the day, and really, it's a pretty ideal lazy girl beauty hack. The most popular type seems to be the peel-off lipstick, but there also exists a pretty beloved tattoo eyebrow stain. There are tons of Instagram posts and YouTube videos of women testing these out as well, since the visual of literally peeling off your lips is an engaging one.

However, there's a potential downside to the products. Alicia Yoon, founder of Peach & Lily, recently told Teen Vogue that she's cautious of the lip stain. "I’m a little wary of the product because there are enough people who have commented about the fact that sometimes it can cause some damage to lips, especially if lips are chapped or not in the greatest shape," she explained.

That being said, I know a lot of folks who've used these successfully, and I am all about trying new lazy girl makeup hacks. So I got my hands on the Berrisom My Lip Tint Pack and the Etude House Tint My Brows Gel and tested them out. Here's how it went down.

The fist step was to prep my lips by aggressively exfoliating and following up with lip balm, because the last thing I wanted was to accidentally pull off bits of dry skin with the lip stain and cause damage or bleeding.

I pulled the tube of Berrisom My Lip Tint Pack out of the box and followed the instructions, which are fairly simple. Glob on the gel, let it set and dry, then peel it all off. I wasn't stoked on the name of the color — Virgin Red — but loved the idea of having subtly crimson lips that could last through multiple cups of coffee.

When I started applying the product, I was shocked by the rich color of the gel and started to worry that the hue might end up being much darker than I anticipated. It was also viscous, closer in texture to Krazy Glue than lip gloss, which made it kind of challenging to apply. I ended up dabbing rather than swiping.

The instructions, which were in Korean and so only semi-intelligible to me, said to let the gel set for what I think was 15 to 20 minutes. I set an alarm, but after 10 minutes I started tapping on my lips to see if the gloss was tacky enough to pull away.

Talking was a challenge because of the viscosity, so I had to sit there in silence, and I was fairly relieved when, after about 13 minutes, the gel started curling up on the corners. I figured that meant it was go time.

Pulling off the lip stain was just as satisfying as it looks. It didn't come off in one fell swoop, like the Internet promised, but I was pleasantly surprised at how easily the "tattoo" on the top lip came off. The bottom lip, however, was a slightly different story.

The gel didn't totally get off on the bottom, but after some light rubbing with my fingers, the color blended together, leaving me with a perfectly ruby red stain.

I grabbed my nearby mug of coffee, because I always have a mug of coffee nearby, and took a sip. There was no sign of a stain on the rim, which felt like a huge indication of success. There were, however, plenty of signs of stains on my fingers, which were looking like I had pet a bloody cat.

I put a light layer of lip balm over my lips and went along my day, and when I say the stain lasted all day, it lasted all day. I even hopped in the shower later that afternoon and thoroughly washed and exfoliated my face. When I came out, my bottom lip was still red. It looks like a scab, but I swear it's just the stain.

If anything, that speaks to the longevity of this product, even if it made me look a little bit crazy. Ultimately, I was pleasantly surprised with how well this worked, but it is definitely not for those with dry or flaky lips. I can't even imagine the pain of accidentally pulling off dead skin with the stain. The whole process looks bloody enough without actually drawing any blood, so make sure you exfoliate and moisturize before giving this one a shot.

Eyebrow tattoos are a very real thing, and they're no joke. This Tint My Brow Gel from Etude House is also no joke, although the result is much less permanent and infinitely less painful. The idea is that you literally paint on your eyebrows with the gel, let it dry, then peel it off. What'll be left are filled in eyebrows without the effort. Sounds simple enough, and after the relative success with the peel-off lip stain, I was feeling pretty confident about the whole process.

My biggest concerns were accidentally ripping out some eyebrow hair or painting my eyebrows too aggressively so that they ended up accidentally looking too long or too thick or something, only for me to be stuck with them forever (or just a day or two).

Coming off the success of the lip stain the day before, I was sure the eyebrow gel would be just as simple. Let it sit for 20 minutes, and get on my way. The instructions, however, told a slightly different story.

Did you read that? Yeah, you have to let the gel sit for at least two hours. It's even recommended that you let the gel set overnight for the deepest effect. I definitely didn't have time for that before I had to run out of the house, so I waited until I was spending an evening at home to give it a shot.

I took a shower and exfoliated my face, as the directions recommended, in order to make sure that the gel didn't get stuck on dead skin and flake away. Though my eyebrows are relatively thick, I definitely have some sparse patches that I like to fill in, particularly around the arch.

This tint gel is also thick. Like, really thick. And the applicator brush isn't exactly precise. But it's all I had to work with.

I wasn't sure how much product to layer on my eyebrows, so I kind of painted a couple of layers. It didn't take long before my eyebrows started looking like Helga Pataki's from Hey Arnold.

There's no quicker way to have your dad and little brother make fun of you than by showing up to dinner with these caterpillars on your forehead, though my dad was very cute and asked me if that was an intentional look. When I explained the whole process to him, he seemed relieved that I wouldn't be stuck with crazy, dark, dense eyebrows. But they were going to be stuck on my face for at least two hours, so my family was just going to have to be stuck looking at them.

The mockery from my family made peeling the gel off feel so much sweeter.

I ended up letting the product set for closer to two and a half hours, at which point the farthest corner of the eyebrow pack began to curl up. It came off incredibly cleanly, and though the rubbery detritus looks like eyebrow hair, there were no eyebrow hairs to be found.

Pleased that no valuable eyebrow hairs had been accidentally pulled out, I was nervous to see the final effect and learn whether my face painting had panned out. Really, I shouldn't have been. I hate using this expression, but it's the only way: My eyebrows were on fleek. They were full and looked totally natural, like I had been blessed with Brooke Shields' eyebrows by a fairy godmother.

When I woke up the next morning, the effect was slightly dulled, but all I did was swipe some eyebrow gel across them and felt good to go. That investment of two hours seemed like a fair price to pay in order to wake up with perfectly arched, filled in brows.

Is Peel-Off Makeup Going To Be Permanent?

I was kind of expecting the worst when I went into this experiment, mindful of the potential for damaged lips and lost eyebrows. But thankfully, none of that happened. Instead, I got stained lips and tinted eyebrows that lasted for slightly longer than my usual products. And really, I was happy with the results.

But at the end of the day, the time investment isn't worth it for me. Yes, my eyebrows looked awesome, but the thought of actually sitting around my house every other night with those black lines painted on my face for hours seems intolerable. I'd rather just swipe through some powder and gel in the morning and get on with it. The lip stain might be a more realistic addition to my routine, but only when I know I have freshly exfoliated and moisturized lips and enough time in the morning to be bothered.

The novelty of peel-off makeup is undeniable, but as an everyday kind of thing, it falls a little flat.