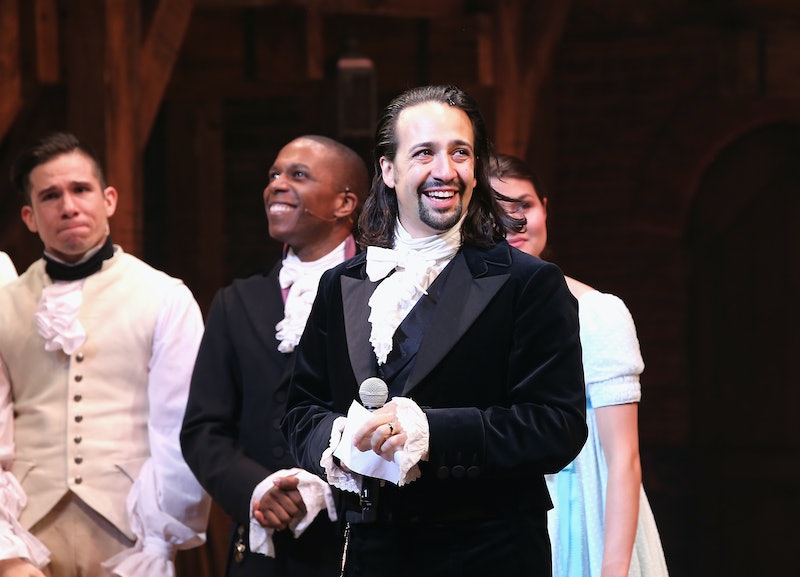 Hamilton, the Broadway musical that has taken the country by storm, has a "backstage pass" book coming out this spring. Now, Lin-Manuel Miranda's Hamilton: The Revolution audiobook has a narrator: none other than Law & Order: SVU star Mariska Hargitay herself. Hargitay will narrate Miranda's story of Hamilton's creation and popularity when Hamilton: The Revolution drops on April 16.

This isn't the first collaboration between Hamilton and Law & Order: SVU . Three of the Broadway hit's stars — Daveed Diggs, Anthony Ramos, and Leslie Odom, Jr. — have guest starred on the NBC drama. That isn't a coincidence, Ramos tells Entertainment Weekly: "Mariska [Hargitay]’s a huge fan. ... She’s just been snatching us up one by one, and we’re totally cool with that!"

It's not difficult to see, then, why Miranda personally requested Hargitay's involvement in recording the Hamilton: The Revolution audiobook version. He says: "Mariska, in addition to being the #1 fan of the show, represents, to me, much of what Hamilton is about — tough, smart, and New York. ... She’s an essential part of this city; it feels only right for her to narrate the story."

For her part, Hargitay seems equally excited about her narration of Hamilton: The Revolution: "I’m hard-pressed to express how thrilled and honored I am to do this. ... Lin-Manuel’s Hamilton enthralls me, and to think that I get to play a part in telling the story of how this masterpiece came into existence, it’s really just a lot to take in."

In addition to the history of Miranda's musical, Hamilton: The Revolution includes annotated lyrics from the show. Miranda reads these annotations for the audiobook, while co-author Jeremy McCarter handles the introduction. Hargitay will narrate the book's prose portions.

Both the hardcover and audiobook versions of Miranda's microhistory are now available for pre-order. Pick up Hamilton: The Revolution from your favorite retailer on April 12.