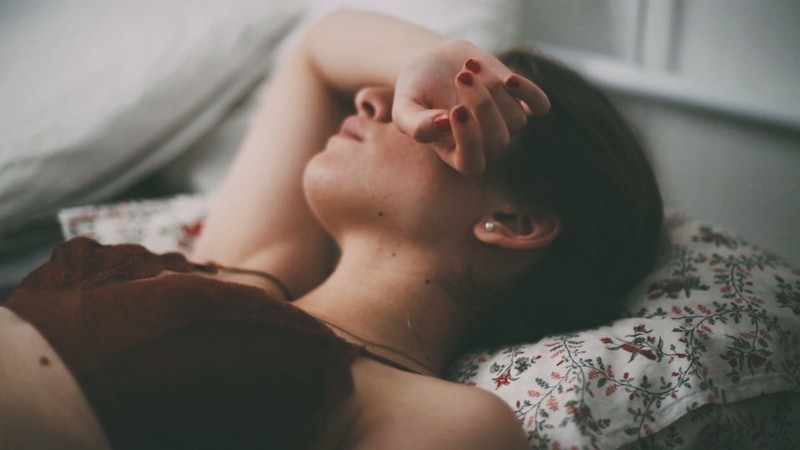 A lot can happen during sex. You can get an orgasm, fall in love, or even start a new life. But there are plenty of other, less pleasant or weird things that happen during sex as well, and unfortunately for us, they're pretty much destined to happen at some point in our sexual lives.

Whether you like to get it on vicariously through romantic movies, porn, or erotica, you've probably noticed that everything that happens is so ... perfect. The people are always sexy, the romance is always passionate, and nobody ever forgets to take their socks off before the really dirty stuff begins. Anyone who's ever had actual sex knows that this is all nonsense. Erotically-themed anything is like the Disney movie of sex: even though you know it's not reality, it doesn't stop you from getting unrealistic expectations about what should really be happening. So when something goes even slightly wrong in the bedroom, it's no wonder so many people develop major sexual insecurities.

The good news is that most of the things that we think of as major fornication faux pas are actually completely normal side effects of having sex. Getting embarrassed by it and allowing it to ruin the moment is a much bigger problem than letting it happen and either ignoring it or laughing it off. None of these things are ever something you should be ashamed of, and if you're sleeping with someone who tries to make you feel bad about them, kick them to the curb and find someone who embraces the reality of sex as it's meant to be embraced.

You know that awkward tummy fart that happens when an air pocket comes between you and your partner and creates a very obvious "PFFFFFFFT" noise? Or when you queef? Or when the sexy moan you thought was going to come out turns into a dinosaur noise? Even at its hottest, sex is still a very primal activity, and the noises that come with it aren't always as romantic as we'd like them to be. Unless you're literally blowing raspberries with your mouth with each thrust, there's no reason to be embarrassed about any sounds that happen during sex.

2. How Long It Takes You To Come

If you are faking orgasms because it takes you a while to achieve a real one, stahp. While the general range of time it takes a woman to reach her big O is 10 to 20 minutes, and the average time for men is 7 to 14 minutes, there really is no "normal" when it comes to coming. So whether you need an hour or a minute to climax, just relax, enjoy the ride, and help your partner get off if they still haven't. If your timing is affecting your sex life, though, there's nothing wrong with trying out new techniques to change things up a bit.

3. Asking For What You Want

It's 2015. We have personal drones and watches that are smarter than we are, and yet so many of us are still scared to ask for what we really want in bed. Honestly, I have no idea why. Does asking for more boob action make us "pushy?" Are we "demanding" if we ask to spend a bit more time in a certain position? Verbal communication is the key to a happy sex life, so please, if you aren't thrilled with what your partner is doing, speak up. There's no shame in wanting to be happy in the sack.

4. Not Being Able To Get Aroused

Some guys have a hard time getting it up, some women have a hard time getting wet, and none of those people have anything to be embarrassed about. Many times, our bodies and brains aren't connected sexually, and you might feel a little betrayed by your genitals when your heart is saying, "yes," but your nether regions are saying, "no thanks." For women, the problem can often be fixed with some more foreplay and lube, and plenty of men find that masturbating for a minute is a good way to get themselves hard. But if your body's lack of cooperation is making things too difficult, don't worry about having to postpone your sexy time for another day. Though, if it's a regular occurrence, consider seeing a doctor to find out if there's an underlying medical problem.

5. Not Being Able To Orgasm

As much as we all want to orgasm during sex, it sometimes just doesn't happen. But before you even think about faking it — Really, I see you thinking about it. Stop — consider changing how you view the goal of sex. Blame it on society, porn, or anything else you'd like, but a lot of us have really been conditioned to think that an orgasm is the reason to get down and dirty. Don't get me wrong, it's a nice perk, but when you start to think of the goal of sex as a way to become closer with your partner, try new things, or just have fun, it becomes much easier to relax during the act. Not getting to the summit of your sexual mountain is nothing to be ashamed of; it's the climb that counts.

Look, when your legs are spread, there's stuff happening down under, and you're not completely focused on holding things in, it's pretty much a miracle if a little toot doesn't squeak out. It's ok to feel a little embarrassed over passing gas in the heat of the moment (but don't blow your bum trumpet as hard as you can, obviously) as long as you don't let it ruin everything else that's going on. Besides, a little wind downstairs is a sign of a healthy digestive system, and that's pretty sexy. Right? Right?

Having sex is a workout. It's a really fun workout, but it's still a workout, and that means you might get tired. Or body parts might start to hurt. Or you get a foot cramp delivered by Satan himself. Whatever the reason, don't just keep going if your mind or body is telling you to hit the pause button. It doesn't make you weak; it just makes you human.

There are thousands of things that can happen during sex, and you can turn down any and all of them at any point you want. It doesn't make you a prude, and it doesn't make you boring. Maybe it's something you're not ready for just yet, or maybe it's something you'll never be ready for, but no matter what, your boundaries should never make you feel like less of a person. If your partner can't accept your own sexual preferences, then they don't deserve to see your hot bod naked anyway.

Full disclosure: If a hair on my body is not an eyelash, an eyebrow, or on my scalp, I want it gone. In fact, I used to be straight-up obsessed with making sure that I was the posterchild for a Venus commercial before coming anywhere close to taking my pants off. So it took a while for me to understand that if my pubes were only slightly prickly when it came time to get busy, it was really not a big deal. No matter how you groom your pubes (or if you prefer to let them grow wild and free), it should never be a cause of embarrassment during sex. Of course, if you and your partner differ when it comes to hair quantity preferences, it's always good to talk it over and see if you can reach a compromise ... or if this is just a sexual relationship that isn't going to work out. But never allow anyone, including yourself, make you feel bad for something your body grows naturally.

Acknowledging that I both look and sound like a velociraptor when I climax was an awkward but necessary part of my sexual growth. I don't know if there's a magic number when it comes to the radius of your back's arc or the decibels of your moan when you orgasm, but if there is, I'm definitely not hitting it. Screw it, though — your O is your time to let loose and express your ecstasy the way you want to. So scrunch up your face, roar like an angry bear, hell, do a tapdance if you want, but when your big moment finally arrives, don't hold anything back just because you think it might look a little weird.

11. Fantasizing About Someone Else

To be perfectly clear, if you are constantly thinking of someone other than your partner during sex, it might be time to accept that it's time to move on to a different person. However, there's nothing wrong with occasionally closing your eyes and imagining yourself in the middle of an orgy with the entire Game of Thrones cast. It doesn't mean you don't love your partner or aren't into what they're doing; it just means you're a human being with the perfectly natural desire to have sex with sexy people. As long as you're not secretly meeting up for spooning sessions with Jon Snow, there's really nothing to be ashamed of if you occasionally fantasize about being stuck with the pointy end of his, um, sword.

If somebody is having sex with you, they probably think you are really, super hot. We all have things we want to change about our appearance, whether it's having more or less fat, the shape of our nose, or that birthmark that kind of looks like a dragon, but not enough to make people think you have magical powers. But here's the thing: The person you are sleeping with also has their own insecurities, and they're things you probably don't even notice or care about. If somebody's evolved brain is instinctively telling them that you'd be a great person to reproduce with (or even if you've never had sex in your life), tell your insecurities to eff off. People aren't lying when they say that confidence is the sexiest trait you can have.