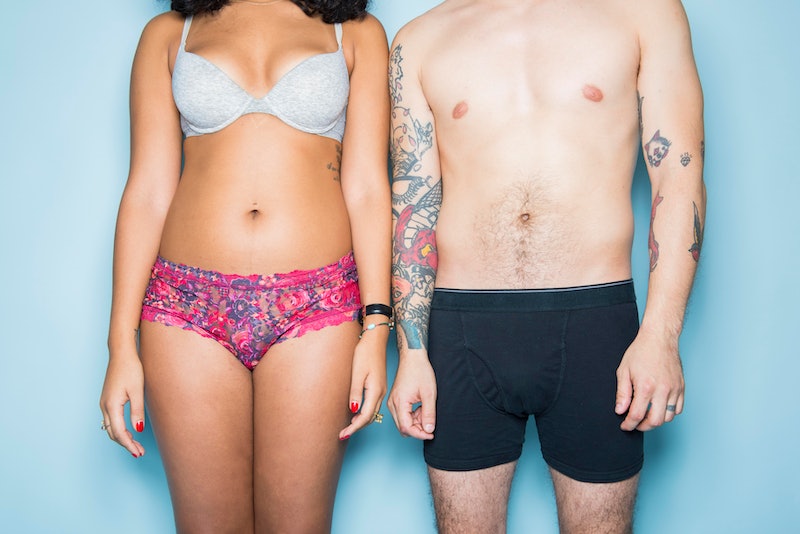 The United States is starting to become more attuned to discussions about gender and gender equality, whether that discussion is about trans visibility, women's empowerment, or toxic masculinity. If you're looking to gain some knowledge about some of these topics, TED Talks on gender are a great place to start — and, indeed, many TED Talks will actually change the way you think about gender and gender equality. The organization does a great job highlighting people with powerful, diverse, and thought-provoking viewpoints, and these seven picks are all definitely worth a watch.

I'm a huge fan of TED Talks for a few reasons. First and foremost, they're a wonderfully accessible platform for education, and they help generate discussions about topics ranging from feminism to game theory to love. Each TED Talk is somewhere between seven minutes and half an hour in length, making the information presented in the talks very digestible. As someone who finds her attention span straying pretty often, I can comfortably sit through even longer TED Talks and find myself engaged. I also like TED Talks because they welcome people from diverse and varying backgrounds, which allows viewers a window into the experiences of people of different ethnic backgrounds, social classes, cultures, abilities, and professions — not just the cis, white, heterosexual, male perspective of the world.

So to get some diverse perspectives on gender and gender equality, check out these seven TED Talks that will change the way you perceive these issues.

1. "A Powerful Poem About What It Means To Be Transgender" by Lee Mokobe

In this beautiful spoken word poem, Lee Mokobe lyrically explains what it's like to grow up transgender, experience shame, love, triumph, and acceptance, and be forced out of the closet by people who want nothing but the worst for you. My favorite parts of this talk are when Mokobe talks about the body. In one particularly powerful stanza, the poet says:

It had nothing to do with hating my body,I just love it enough to let it go,I treat it like a house,And when your house is falling apart,You do not evacuate,You make it comfortable enough to house all your insides,You make it pretty enough to invite guests over,You make the floorboards strong enough to stand on.

Because so much of our society's narrative focuses on trans people hating their bodies, Mokobe's insight into why reducing trans and gender non-conforming people to just their skin and bones can be so harmful. In reality, there is so much more to the discussion.

2. "An Invitation For Men Who Want A Better World For Women" by Elizabeth Nyamayaro

Elizabeth Nyamayaro uses moving personal anecdotes, as well as her work as the head of UN Women’s HeForShe initiative, to explain why men must act in solidarity to empower women and promote gender equality all over the world. In this video, Nyamayaro addresses an important question she frequently gets asked — "Why invite men? They are the problem! In fact, men don't care!" — in an incredibly poignant way, and with lots of data to back her points up.

3. "Why We Need Gender Neutral Bathrooms" by Ivan Coyote

Many of us take public bathroom use for granted, but for trans and gender non-conforming people these places can be dangerous and scary. In this powerful talk about why we need gender neutral public restrooms, Ivan Coyote discusses experiences with being physically and verbally attacked in public restrooms and why splitting restrooms by a gender binary doesn't make much sense.

4. "The Courage To Tell A Hidden Story" by Eman Mohammed

Photography is considered to be a man's job in Palestine and much of the Middle East and South Asia — but Eman Mohammed is one of the few female photojournalist in the Gaza Strip. In this short and important talk, she discusses what her role is like in a male-driven industry: She discusses how her male colleagues deliberately put her in dangerous situations to shame and discourage her — and also how she hasn't let anyone stop her from telling the hidden stories from the region.

5. "Find Your Voice Against Gender Violence" by Meera Vijayann

Meera Vijayann's TED Talk starts off with some difficult stories about sexual assault and trauma — and how, in Vijayann's experience, her cries for help made no difference in the small towns and big cities of India where she grew up and experienced these assaults. In this inspiring talk, Vijayann encourages people to open their eyes to the reality of rape, assault, and sexual violence and do something about it using dialogue and digital media.

In this anecdotal TED Talk, iO Tillett Wright talks about growing up and switching between identifying as male and female, falling in love with men and women, and refusing to label herself for many years until she found an identity that fit.

7. "How I Help Transgender Teens Become Who They Want To Be" by Norman Spack

In this 17 minute talk, Norman Spack immediately dismantles the idea that gender and sex are the same thing — or, indeed, that sexuality and gender are related at all. He goes on to talk about his personal work helping people with their gender identities and sexualities, and also how working closely with non-cisgender people ultimately benefitted him.