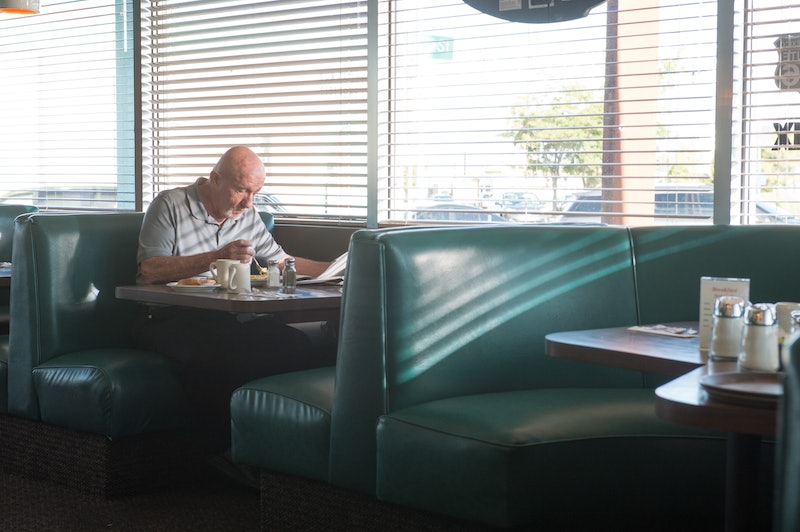 For a show that's a spinoff of one of the most beloved television series of modern times, AMC's Better Call Saul has been very careful not to go too overboard with the Breaking Bad fan service. Other than lead characters Saul Goodman (née Jimmy McGill) and Mike Ehrmantraut, there have been only a small handful of characters that have appeared in both series; the only crucial one so far being maniacal drug dealer Tuco Salamanca. There's been no Walter White shopping for groceries in the background, no Jesse Pinkman getting his feet splashed by Jimmy's car. But this Monday's episode, "Rebecca," finally added another familiar face to Saul's roster of Breaking Bad cameos: Hector "Tio" Salamanca.

First, a brief recap on who exactly Hector is — especially since he looks so different than he did last time we saw him. Hector Salamanca was once an enforcer for the fearsome Juárez Cartel… although those days were far behind him by the time we met him on Breaking Bad, since he had been confined to a wheelchair and unable to communicate except for with the dinging of a bell, his body ravaged by a stroke. Hector ultimately went out in spectacular style, killing his lifelong enemy, drug lord Gus Fring, with a bomb strapped to his wheelchair.

So what's Hector doing on Better Call Saul? After Nacho hired Mike to get rid of Tuco last week, resulting in the unstable dealer getting locked away for pulling a gun on and beating up the elderly fixer, the Salamanca patriarch paid his nephew's victim a visit. Interrupting Mike's leisurely meal at his favorite diner, Hector apologized for Tuco's actions… but it quickly became clear that Tuco's Tio had ulterior motives as well. Although he acknowledged that Tuco should go away to prison for what he did, he just shouldn't go away for eight years — which is the combined sentence on the assault and gun charges.

Hector's solution? Tuco will do the time for assaulting Mike if Mike agrees to claim the unregistered firearm was his own; as a former cop, he'd be likely to get let off without any charges. But what's in it for Mike, you wonder? A handy $5,000. This puts Mike in something of a catch-22. Does he stay loyal to his original customer but get on the bad side of a powerful cartel member? Or does he take the deal, get more money to help out Stacey and Kaylee, but risk incurring Nacho's wrath when Tuco gets out of jail sooner than expected?

Personally, I'd rather take my chances with Nacho than with Hector. We'll see what Mike decides next week. But whichever path he chooses, it'll likely be just the next step in an ever-worsening situation. Because now that Tio Salamanca is involved, things can only go downhill from here.