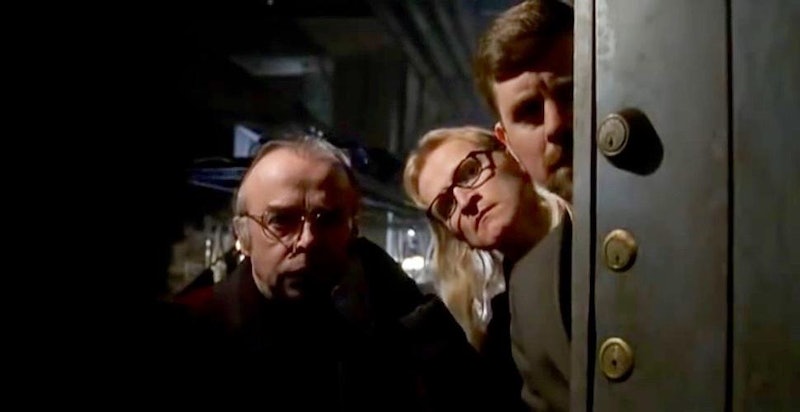 Though the simmering passion between Fox Mulder and Dana Scully is undeniably the greatest love of all time, the protagonists of The X-Files are hands down not the best characters of the show. While most of the side characters are pretty "meh" — I can't really get behind A.D Skinner or The Cigarette Smoking Man half as much as I can Mulder and Scully — the best part of The X-Files are our favorite lovable trio, The Lone Gunmen.

This dorky group of dudes are first introduced as Mulder's pervy and incredibly helpful friends in the 17th episode of the first season of The X-Files "E.B.E." In the episode, they assist the agents in breaking into a power plant where an extraterrestrial is allegedly being held by hooking them up with fake IDS. The three self-proclaimed nerds, Richard Langley (Dean Haglund), Melvin Frohike (Tom Braidwood), and John Fitzgerald Byers (Bruce Hardwood) go on to assist the agents with many of their tech needs. Which causes one to wonder, well, how do these little dudes manage to afford so many cool gadgets?

They also run a publication called "The Lone Gunmen," in which they write conspiracy theories about the government. Possibly their coolest characteristic is their knowledge of hacking, which went down before computers and hacking were the norm (oh the '90s). The following are the reasons why the men of the Lone Gunmen are the best parts of The X-Files.

1. The Wonderful Banter They Provide

What exactly is a G-man? I couldn't tell you.

2. Their Lack Of Understanding Of Females

Who could forget when they tricked Scully into coming to Vegas and didn't figure out she had been drugged because they didn't understand her at all? They didn't get that girls don't always want to have fun. Such lovable fools.

3. They Had The Best Hobbies

Playing Dungeons and Dragons in the basement of a mall? Sign me up. Hacking? Also cool.

4. Their Conspiracy Theories Were On Point

5. They Were So Wonderful They Got A Spin-Off

And, sure, it got canceled about four months in, but you didn't see any other characters from The X-Files getting spin-offs did you?

6. The Name Of Their Publication Itself Is Brilliant

The trio and their publication are named after the concept that John F. Kennedy was shot by a lone gunman. They clearly do not believe that concept.

7. Those Glorious Gadgets They Have

Look at all the stuff going on back there. Who even knows what nonsense those guys have?

How does he get it so shiny?

9. They Went Out So Bravely

I don't want to ruin anything for anyone. But like, I'm still crying.

The X-Files is a wonderful, fantastic, amazing, wonderful series. Did I say wonderful twice? Probably. It doesn't matter. The point is, the show has a great deal to offer: quirky mythology, quirky dialogue, quirky episodes, quirky all around. But the greatest thing it has is its quirky characters. Three cheers for the three greatest characters (who aren't Mulder and Scully): Langley, Frohike, and Byers.