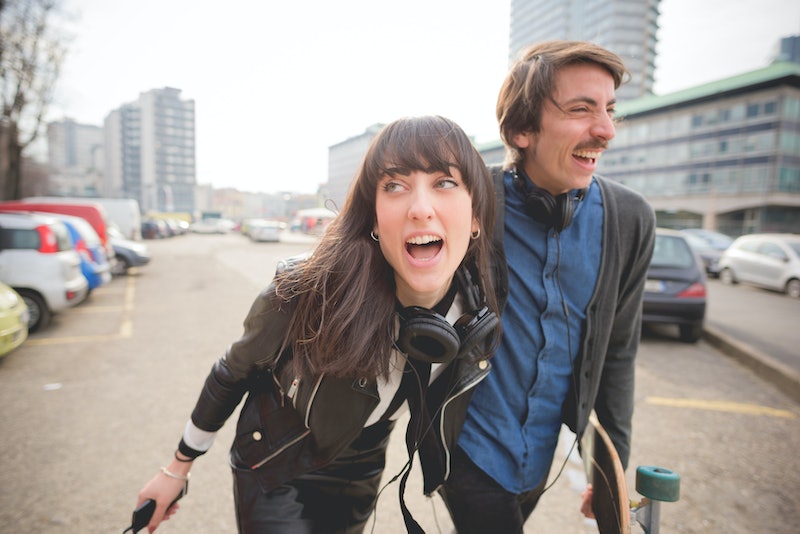 The experience of dating is various and vast, Goldilocksian: Some love it, some hate it, some are in-between. We can all agree, though, that dating costs money for at least one of the two on an average date — so exactly how much money do we spend on dating, on average, before we find "The One"? According to a new poll, quite a pretty penny. Art event planners Paint Nite surveyed 1,000 married people about the ins and outs of dating in this country circa now, and came away with a clearer picture of the way we date each other — and how many Benjamins we wind up spending before we get married (and continue to spend money on dates, presumably — just not with the deep-down someday goal of marrying the person, or the next person, or the next person we're dating).

Here's what Paint Nite (which, by the way, seems like a fun way to spend an evening) found about the amount of money the average American spends on dating before they "settle down" (I've always deeply hated that term — we can't be frisky and excitable and vibrant when we're married??) and eventually get married, assuming marriage is something they want and wind up doing.

🚨🚨🚨🚨🚨🚨! That is a lot of money! The average American spends just more than $20K on dates over the course of their lifetime as a single bachelorette or bachelor. Of course, this is an average — the mean of figures estimated from 1,000 men and women hailing from very different walks of life. One woman's $20K is another woman's $5K is another woman's $40K, if you catch my drift. But overall, you might find yourself coughing up a fifth of a hundred thousand dollars just on dating alone in your existence.

2. We Date For About Five And A Half Years Dating Before Tying The Knot

From start to finish. From first date ever, as a little gap-toothed 16-year-old or whatever, to first date ever as a married couple, the week after you declare, "Till death do us part," or some such vow. Five years. But, again — this is average. Not median. Not mode. Mean. And the trouble with an averaged statistic is that it can be really problematic to compare it to your own life.

For example, 44 of the 1,000 married people said they dated for 20-plus years before marriage. Were they, by chance, New Yorkers? Actually, I jest, but according to the region breakdown of these figures, 17 of those people were from the Southeast; 10 from the Northeast; nine from the West; six from the Midwest; and just two from the Southwest. So I was close, though it looks like Southerners have a track record for long dating careers before marriage, which surprises me.

5. Date Night Happens But Once (Or So) A Week

Of the 1,000 respondents, just over half, or 528 people, said they went on between one and five dates per month during their tour de dating, from start to finish. The exact question was, "Before you were married, how many dates did you go on per month (with others and with your eventual partner), on average?" Though 22 percent said six to 10 dates per month was more on par, most really only went out about once a week. Drat. But dates are fuuuun!

6. Dates Can Be Mad Pricey

Though most people spent just under a Grant on dates on the regs, some really could be known to go all out: A total of 21 percent said that they most they had ever spent on a date was between $101 and $300. Though $101 isn't a crazy amount of money for a date, $300 is pretty high. Sounds like some awesome dates. Another 2 percent said they'd spent over $901 on a date at the most. I'd like to go on that date!

7. Most People Don't Go On Super Expensive Dates, Though

The absolute most amount of money that 26 percent of respondents had spent on a date was between $1 and $50. What?! This was closely followed by 23 percent of those surveyed, who said that the most they'd ever spend on a date was $51 to $100. Who are these cheapskates?! JK, JK, good for them for being frugal slash they must not live in NYC, where it costs $20 just to walk out the door.

8. People Meet Most Commonly Via These Three Routes

Most often, people meet via scheming little matchmaking friends (35 percent), bars and nightclubs (26 percent) and online dating sites and apps (22 percent). People also said they meet via social media (13 percent) and visiting churches or synagogues (8 percent). Respondents could choose more than one method in their answer, so perhaps some of these people have met some partners at bars and others at churches. Or some partners online and others at synagogues. Who knows.

9. A Lot Of People Decide Who Is Going To Pay For A Date Beforehand

A whopping 41 percent said they figure out who is going to pay for a date before they go on it. That's interesting. That says to me that people are either a) utilizing great communication skills; or b) by "figure out," they mean "assume," because one of the two people in their relationship always pays when they go out. Another 24 percent say they figure it out when the bill comes, followed by 22 percent who say, "It varies," 9 percent who figure it out "during the date," and, hysterically, 4 percent who "just ignore the bill when it comes." Nice move. (By the way, FYI, of the 40 people who say they like to "ignore the bill," 35 were women and five were men. LOL.)

10. The Best Way To Greet A First Date Is A Good, Old-Fashioned Hug

Yes, you could give them a smooch (OK by 6 percent), a hug and kiss (11 percent say yes to that), a "head-nod greeting" (seems like a good idea to a very weird 5 percent), or a handshake (a sterile and staggering 30 percent think that's a good idea), but most people (39 percent) opt for a hug at the start of a first date. Even more popular: Just say hi, with 65 percent reporting that is the way to go. (You could pick more than one option here, so perhaps some of these respondents are down with, say, a kiss and a hello. Or a hi and a handshake. Or a head-nod and a kiss. The possibilities are endless! Have fun out there, kids.