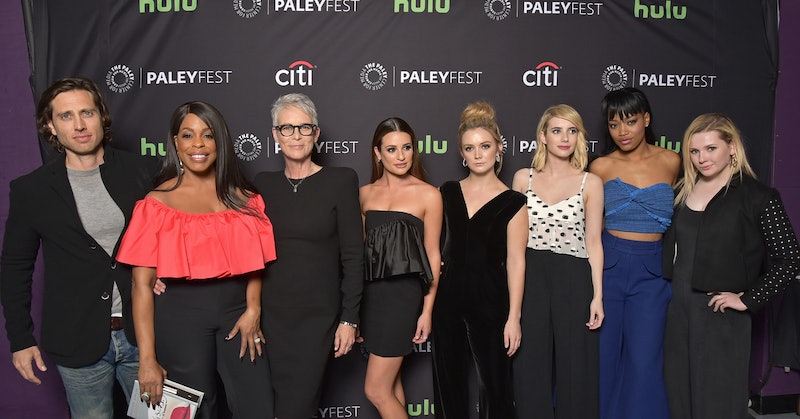 Scream Queens has room for three new male cast members, to be “studly doctors” according to producer Brad Falchuk, and the cast of Scream Queens have their dreams of who could join their cast. On the red carpet for the PaleyFest Scream Queens panel in March, stars of the show gave their wish list for new male guest stars on Scream Queens. As long as no one’s been cast yet, they might as well, right? Jamie Lee Curtis, the original scream queen who plays Dean Munsch on the show, made a bold statement. “Down there, somebody said, 'Who would you like to be your boyfriend on the show?' And I just, without even thinking, said Ed Norton,” Curtis said. “I just was like, ‘Edward Norton.’ And then it was like whoa, whoa. Whoa, that just happened on national television, but OK.”

At least Norton wouldn't get Munsch in trouble with the school or any parents. In Season 1, she slept with Chanel (Emma Roberts)'s boyfriend Chad (Glen Powell). That didn't go well. Chad fell in love with herm and Munsch wanted none of that. But not all male guest stars need to be love interests. Abigail Breslin plays Kappa Kappa Tau sorority sister Chanel #5. Sisterhood isn't all its cracked up to be for Chanel #5, because they call her names and even falsely accuse her of stabbing Hester (Lea Michele) in the eye. At the end of the first season, she's stuck with Chanel and Chanel #3 (Billie Lourd) when they're all sentenced to a mental institution. So it's no wonder Breslin's dream guest star is a real tough guy, one who might be able to protect #5.

In fact, it's her favorite rapper-turned-actor, but he may be busy busting perps at his day job. “Ice-T, because I love SVU so much,” Breslin said.

Niecy Nash plays officer Denise Hemphill, and Season 2 promises her a promotion from police officer to FBI agent investigating the hospital. Which means that the show still needs to cast three studly doctors, let's not forget. If Harry Styles is the number one choice for Studly Doctor #1, Nash thinks the other two should also be pop stars. “Jason Derulo, the Biebs,” Nash said. “Come on, Bieber. Come on.”

Billie Lourd plays Chanel #3, who is also sentenced to the asylum with the other Chanels. She had two choices for two different pairs of Season 2 guest stars. “I just keep saying this but Rashida Jones and Paul Rudd from I Love You, Man,” Lourd said. “It’s never going to happen, but Paul Rudd is the everyman.” Then Lourd thought of another pair of comediennes. “I am a huge fan of Broad City,” Lourd added. “I live for those girls.”

If any of the Scream Queens gals get their wish, Season 2 will have an epic cast when the show returns this fall on Fox.