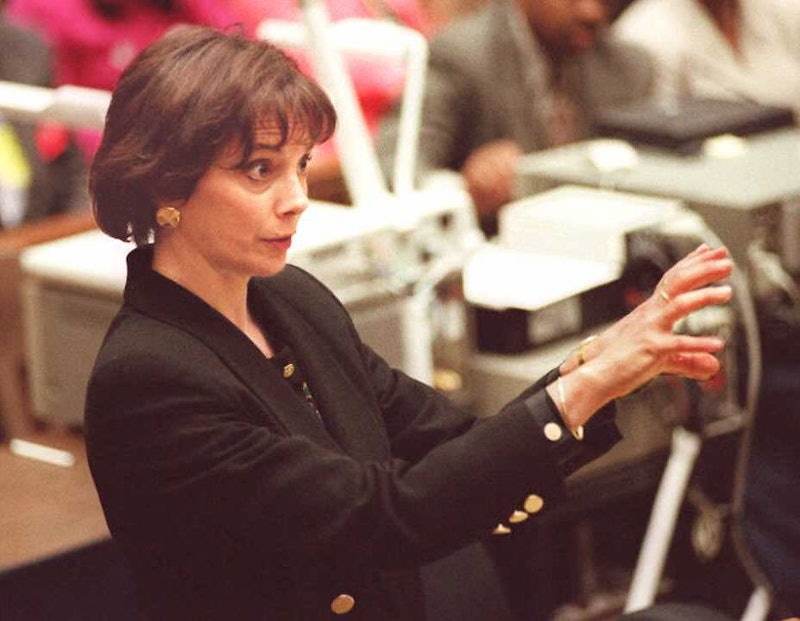 Last week's episode of The People v. O.J. Simpson: American Crime Story rightfully placed a strong focus on the rampant sexism faced by lead prosecutor Marcia Clark. It was both infuriating and painful to watch, but the episode "Marcia, Marcia, Marcia" was an incredibly important one because it accurately depicted the prejudices and violations she endured due to her gender. We saw Johnnie Cochran mock her "babysitting problems" in the courtroom, while topless vacation photos were leaked to the press and tabloids took low blows by attacking her haircut. With an intelligent and driven woman leading the prosecution team, it was beyond upsetting that the media chose to focus on her physical appearance. But, before the media circus went into full force, the show also portrayed Clark's boss Gil Garcetti suggesting that she work with an image consultant — and this is what lead to the aforementioned haircut. Though there is no record of this exchange ever happening in real life, it was an important moment for American Crime Story's focus on sexism when Marcia Clark stood up to her boss after he mentioned her hair.

At the beginning of the episode, she arrived at the courthouse prepared to focus on her work despite all the indignities she'd endured over the past several weeks. She'd also changed her hair a bit since the last episode and Garcetti commented that he "loves the hair." Clark's calm, collected response was succinct and 100 percent spot-on: "Please don't mention my hair again. Ever." With this statement, she stood up for herself in a manner that was both professional and admirable.

The scene was brief, but it was an important one in this episode. Although the sad reality is that Clark was going to be unfairly attacked by defense attorneys and the media no matter what, it was incredibly disheartening to see her boss buy into the media's feeding frenzy when he should have reassured her that the unfair attacks had no bearing on her competence and integrity as an attorney. Instead, he was portrayed as encouraging Clark to work with an image consultant and get a "makeover" so the jury and the public would like her more.

Garcetti's actions on the show put Clark in an incredibly difficult position — after all, he was her boss and everyone in the workforce knows that it's generally not a good idea to defy the suggestions or orders of our superiors. And, again, the issue of getting the jury and public to "like" Clark seems directly related to her gender. The all-male defense team didn't get attacked over issues of likability or haircuts — and it illustrates that Clark was essentially subject to a different set of rules and standards simply because she was a woman.

When Garcetti told Clark he loved her hair in "Conspiracy Theories," he once again undermined her due to her gender. Furthermore, his comment about Clark's new hairstyle illustrated that he had learned nothing from the tabloid attacks she'd endured in the previous episode. Whether he meant it this way or not, he essentially reinforced the idea that her hairstyle was somehow more important than her tireless work on the case. Watching Clark stand up for herself was an inspiring moment because she made a strong, important point and then immediately shifted her focus back to the case. She didn't waste time by turning it into a drawn-out conflict — Clark had more important things on her mind. But it's so important that she didn't just let the comment slide, because no boss has the right to comment on the appearance of his or her employees.

The treatment of Clark throughout the Simpson trial was infuriating, but I'm glad to see that American Crime Story is addressing the sexism she faced because it sheds light on an issue that is unfortunately still very real. The manner in which Clark handled herself is inspiring and admirable — and it's important that the series has focused on that as well.