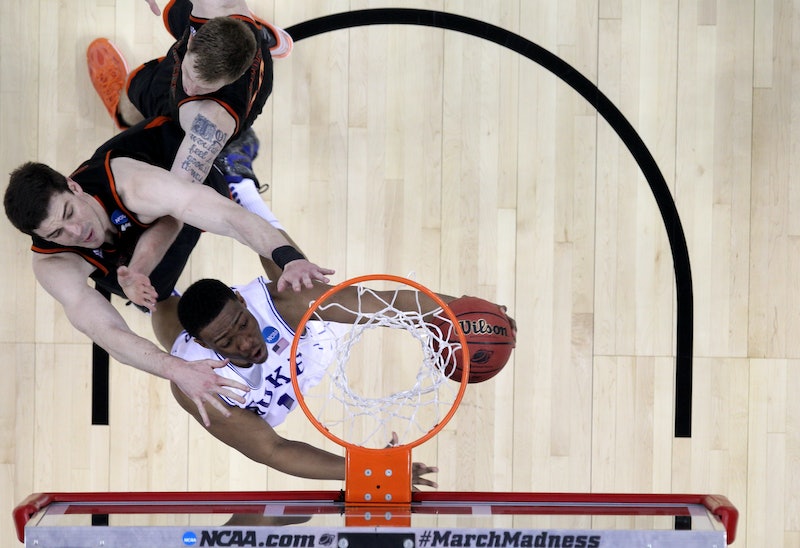 This March has been, and will be, full of important events: Super Tuesday election day, Saint Patrick's Day, and usually the first day of spring. But dedicated sports fan everywhere will tell you March is defined by one thing and one thing only: March Madness. Since 1939, the NCAA's men's college basketball teams have taken to the court to rival each other in the celebrated single-elimination tournament. The tournament begins on Tuesday and fans are already placing bets on their favorite teams, but let's take a step back. Which famed NCAA team won last year's men's March Madness tournament? After all, incumbents have an inherent upper hand, whether it's in politics or sports.

On April 6, 2015, the Duke Blue Devils took home the men's NCAA championship for the fifth time in history after beating the Wisconsin Badgers by just five points. Leading up to the conclusive match, the team outplayed the Michigan State Spartans during the Final Four Tournament just two days prior. The showdown aired on TBS, CBS, TNT and truTV, and racked up the highest viewership in over two decades. According to Nielsen Fast Nationals, over 11 million people, on average, tuned in to watch any given match. More impressively, the Duke vs. Wisconsin face-off attracted over 28 million viewers.

To put it into perspective, the first Democratic debate of the year, hosted by CNN in October, garnered over 15 million viewers, making it the most-watched Democratic debate in history. It goes without saying; March Madness is a big deal. America loves college basketball.

In the end, it was Duke's freshman players that made the game memorable. Freshmen Tyus Jones, Grayson Allen, Jahlil Okafor, and Justice Winslow took the division by storm and set a record for most points by freshmen in a championship game. Head coach Mike Krzyzewski, who has led the school's team since 1980, made a statement after the final buzzer sounded, praising his team.

The 2015 win was Coach K's fifth NCAA victory. This year, there are high hopes for last year's top team, with the return of a more experienced Allen and two new highly-rated freshman players, Brandon Ingram and Derryck Thornton. Even so, the team is only ranked as a 4-seed, and as of Monday, ESPN ranked Kansas as the most likely to take home the championship at 24.1 percent. March Madness kicks off on Tuesday in Dayton, Ohio.

More like this
17 Powerful Photos From March For Our Lives Protests Across The U.S.
By Michelle Toglia
7 Expert Tips For First-Time Pickleball Players
By Carolyn Steber
The Nike & Jacquemus Collab May Have Been Inspired By Princess Diana
By Frances Stewart
The 10 Best Longline Sports Bras, According To Reviewers
By Danielle Calma
Get Even More From Bustle — Sign Up For The Newsletter