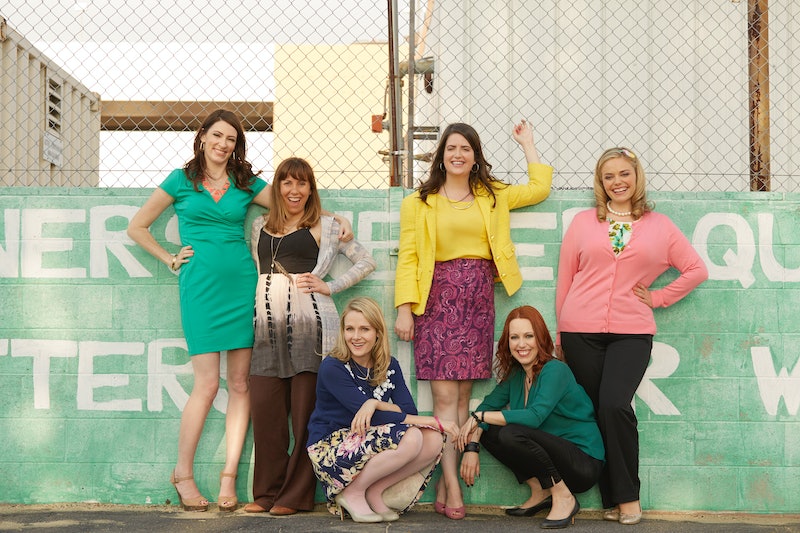 You might think that the incredibly important subject of the people who help to shape the young minds of America wouldn't be funny, but TV Land's Teachers would prove you totally wrong. As their freshman comedy proves, a group of elementary school teachers who don't quite have their lives together is the perfect subject for raunchy comedy. But, for those enjoying TV Land's scripted series, there is an important question that needs to be answered. Pop quiz! When will Teachers return for season 2?

Trick question! The network hasn't set a return date for the series just quite yet. But, TV Land did renew Teachers for second season that will be 20 episodes according to TV Line. That's double its first season! Teachers season 1 has followed the various women in a clique of elementary school teachers, played by the comedy troupe Katydids (a group of women who all have some variation of the name Katie), as they hook up with incredibly inappropriate men, explore their sexuality, or attempt to launch an anti-bullying campaign in their school. But, though the show will have at least a two-season life on TV Land, according to Deadline Teachers was based on a web series. To tide you over until Teachers returns, here are five other television shows based on web series to check out!

The Comedy Central show follows the lives of two millennial Brooklynites, but Broad City was originally a web series. It made the jump to television in 2014 and is now in its third season. If you're not already watching Abbi and Ilana's adventures in the Big Apple, the first two seasons are available on Hulu and newer episodes can be found on Comedy Central.

First conceived as a series of short humorous videos for Funny Or Die, Drunk History is another web series picked up for TV by Comedy Central. The concept is simple: drunk celebrities retell historical events that are acted out by a rotating cast of famous actors. All three seasons of Drunk History are available to watch on Comedy Central and Hulu.

Lisa Kudrow's Web Therapy began as an online-only series before being picked up by Showtime and running for four seasons. Though it has since concluded, clips from the star-studded part-improv comedy show are available on Showtime's website and the first episode is up on the network's YouTube.

The Bachelor parody series was first available on Yahoo! Screen's comedy channel before Burning Love was picked up by E!, as reported by EW. The show's three seasons are available to watch on Hulu.

Billy on the Street

Another show that originally started off as a Funny Or Die sketch is Billy Eicher's comedic bit where he runs up to strangers on the street and yells at them to answer questions for a dollar — sometimes with celebrities in tow. Billy on the Street was picked up by TruTV and you can watch full episodes on the network's site.

So, although Teachers may be one of the newest comedy web series to make the jump to television, it certainly isn't the only one. You can spend your time waiting for Teachers season 2 by checking out these comedies and perhaps the web series on which they're based!

More like this
The 'Dead To Me' Creator Says Her Series Finale Idea “Felt Very True To The Show”
By Brad Witter
Will 'The Walking Dead' Return For Season 12?
By Grace Wehniainen
How Is The British Royal Family Related To The Romanovs?
By Karen Fratti
Netflix Bumped Up The 'You' Season 4 Premiere Date — Here's What To Expect
By Bustle Editors
Get Even More From Bustle — Sign Up For The Newsletter