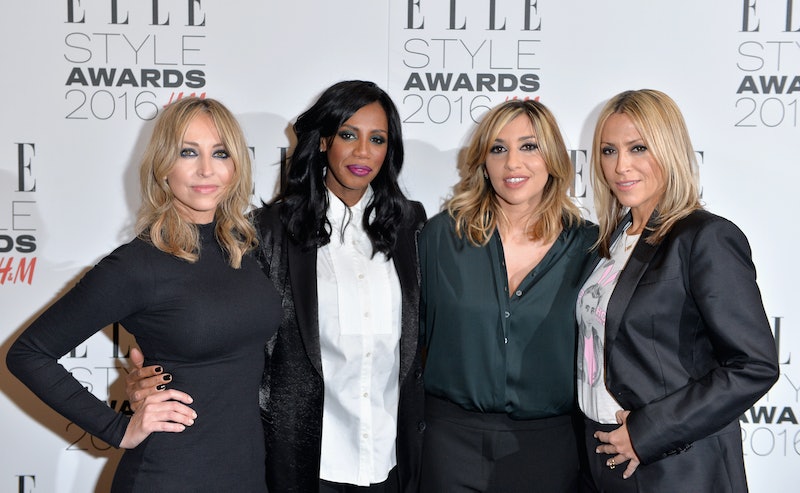 It's been 19 years since All Saints released their debut album, 15 years since the British girl group has been on tour, and countless nights since I've waited for this day to come. The group announced Tuesday that they will be going on tour to promote their new album Red Flag , due to be released on April 8. “SO SO excited to announce we’re going on tour!” the group tweeted. Excuse me as I tend to the childhood fan inside of me. She's kind of losing her mind right now.

Melanie Blatt, Natalie Appleton, Nicole Appleton, and Shaznay Lewis — the ladies of All Saints — first came on the scene with their eponymous '97 CD. The hit single from that album — "Never Ever" — reached number four on the Billboard 100. It was a jam if my 7-year-old ears had ever heard one. With that opening soliloquy, the rap in the middle, and the overall message of deep confusion post-breakup, "Never Ever" pretty much defined pop music/my life that year. The pure joy that comes with this reunion announcement should then be no surprise.

And don't lie to me. If you were a living breathing human in 1997, you heard that song, and you probably had the album. That's why you're most likely experiencing the type of emotions you can't exactly put into words right now. But, here. Let these brilliant All Saints lyrics help explain your feelings.

1. A Few Questions That I Need To Know

I have so many Q's. Like, where will they be touring?

2. Not Only Will Your Answers Keep Me Sane, But I'll Know Never To Make The Same Mistake Again

Oh, here's the answer. The tour will visit 10 British cities, starting off with Newcastle in October and ending in Norwich.

DANGIT. I don't live anywhere near and/or around those British cities.

How do I get tickets to this? How do I drop everything and move to the U.K. by October?

5. You Got My Conscience Asking Questions That I Can't Find

Yeah, I don't have the answers.

Guess I'll wait for the album.

8. Never Ever Have I Ever Felt So Low

WHY ONLY IN THE U.K.

9. Sometimes I Feel Like I Don't Have A Problem

It's no problem really. Like I said, the album will suffice. While I sob in a corner.

Well, now I do. But that doesn't help. See above.

13. I've Been Watching You And I Know You Like To Party Baby, And I Know That Sounds Really Good To Me

I bet the concert is such a party. A '90s dream party.

14. If You Know That You Want To Get On Down, Don't You Worry 'Cuz All Saints Will Be Around

All right fine, I get it. You'll be around, regardless if I see you on tour or not.

Never ever have I wanted to see anything more than All Saints performing "Bootie Call" live in 2016. And I know I'm not alone on this, guys. Let the '90s nostalgia begin anew.