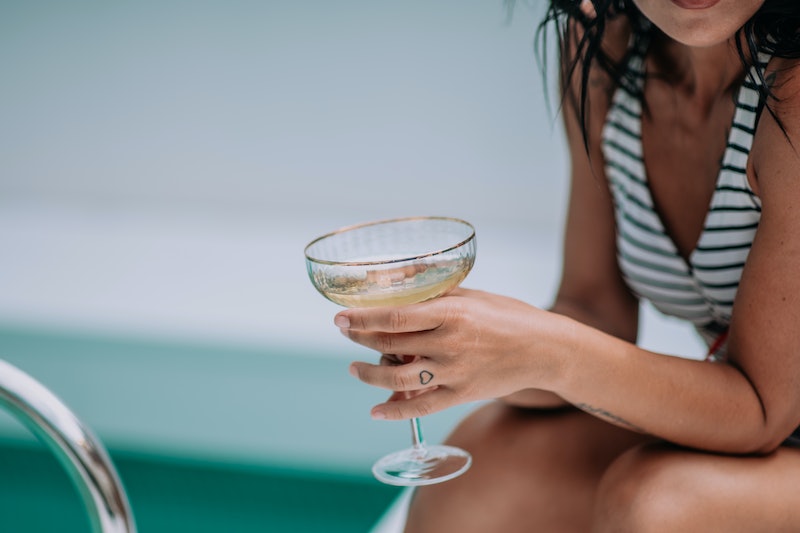 Like about 18 percent of the U.S. population, I have an anxiety disorder. And, like a fair share of similarly afflicted folks, I often treat my anxiety disorder as a bit of an afterthought, even though in many ways, it is the axis around which my days revolve. I don't often think about whether engaging in certain activities will cause my anxiety to flare up, consider whether certain foods will make my mood worse, or examine my daily schedule to make sure it has as few anxiety triggers as possible — and I often pay for it, in lost sleep, racing thoughts, and agonized paranoia about whether all of my friends now think I'm an idiot because I used the wrong "their" in a group email.

Though many of us anxious folks spend a lot of time avoiding situations that consciously make us feel anxious, like attending parties or speaking up at business meetings, we probably don't spend a lot of time avoiding the small things that ratchet up our anxiety — which is a mistake. Avoiding the things we fear — known as "avoidance" — can actually make our anxiety worse, as it often isolates us from friends or keeps us from achieving goals or connecting with others in the ways that we want. On the flip side, practicing self-care by limiting our time in situations or engaging in activities that have been proven to increase anxiety can make a real difference in your quality of life. Especially since many of the coping mechanisms that we develop on our own (like drinking booze to take the edge off) can end up making us more anxious in the end.

I say this not to shame anyone (including myself) for not being perfect, or to claim that that self-care is a cure-all for anxiety or anything else; even folks practicing self-care techniques to the letter will still have bad days. Rather, consider this a reminder that the difference between feeling completely worn down by a mental health issue like anxiety and feeling like you can deal with another day often lies in practicing self-care — and that taking care of yourself is not as difficult or intimidating as it might initially seem.

"People drink to cope with anxiety" is up there with "the sky is blue" and "no movie requires a third sequel" in the realm of obvious facts — but that doesn't make it a good idea. Obviously, in the short term, a drink can help you feel less anxious; alcohol is a sedative and a depressant, so it relaxes your muscles and depresses functions of your central nervous system. But even a few drinks can disrupt your sleep and cause rises and dips in your blood sugar — all things that can bring on anxiety. Alcohol can also mess with your brain's serotonin levels, which can sometimes make you feel more anxious and depressed than you were to begin with, after you eventually sober up.

And in the long term, folks with anxiety — especially social anxiety — should pay special attention to how much they imbibe, because we're often more vulnerable to developing a troubled relationship with booze. According to the Anxiety and Depression Association of America, 20 percent of people dealing with social anxiety disorder also struggle with alcohol dependence or other addiction issues.

This isn't all to say that if you've been diagnosed with an anxiety disorder, you are doomed to spend the rest of your life sipping seltzer at happy hour; but staying aware of your limits and how much you're drinking can help you keep your mood level and your anxiety down.

Most of us accidentally skip meals now and then, due to hectic work schedules, travel, or simply being so absorbed in an important project/Facebook that we lose track of the time. And though no one should be intentionally skipping meals (seriously — it will make it difficult for you to think and it slows your metabolism, among other drawbacks), anxious people should be extra sure to steer clear of this habit — skipping a meal can lead to a drop in blood sugar, which can lead to a rise in anxiety.

3. Spending Too Much Time On Social Media

OK, this one shouldn't come as a surprise to ... well, literally anyone who has ever been near a computer. But it's easy to forget, especially when you find yourself accidentally getting sucked into Hour 3 of clicking around the profiles of people you haven't spoken to since high school (because, you know, you didn't actually like them in high school). A 2012 study of UK social media users found that two-thirds of those surveyed had trouble sleeping after using social media, and the British Psychological Society found that among teenagers, heavy use of social media was linked to higher levels of anxiety, as well as lower levels of self-esteem.

If you catch yourself scrolling through pictures of someone else's kids and cats in a daze, try getting up and going for a walk or otherwise taking a break from technology.

It's really easy to consume beverages all day and still not drink enough water — tons of common drinks like soda, tea, coffee, and alcohol actually actively dehydrate us (and caffeine can aggravate anxiety on its own, no matter how hydrated you are). But even if you're steering clear of drinks that actively dehydrate you, you may still not be getting enough water — which can be enough to mess with your anxiety levels. According to the Mayo Clinic's website, "Even mild dehydration can affect your mood," a statement that was borne out by a 2009 study conducted at Tufts University, which found that being mildly dehydrated caused subjects to feel "angry, confused, tense and fatigued."

So how much water do you actually need? The Mayo Clinic recommends nine cups of non-dehydrating beverages a day for adult women; though the amount of exercise you engage in each day, as well as your environment, and any illnesses you're currently dealing with, can impact the total amount you should be consuming.

5. Not Getting Enough Sleep

Like skipping meals, under-sleeping is kind of ill of modern life — with demanding job or school schedules, sometimes it feels like the only way to see your friends or unwind at all is to cut into your sleep. But the danger that lack of sleep presents for the anxious is two-fold: according to researchers at UC Berkeley, "sleep deprivation amplifies anticipatory anxiety by firing up the brain’s amygdala and insular cortex, regions associated with emotional processing...Furthermore, their research suggests that innate worriers — those who are naturally more anxious and therefore more likely to develop a full-blown anxiety disorder — are acutely vulnerable to the impact of insufficient sleep."

In addition to all the health hazards of sitting all day that you have probably heard about already — back problems! Increased risk of death from cardiovascular ailments! — some research suggest that a sedentary lifestyle may increase our anxiety symptoms, while regular movement and exercise can help tone them down. Luckily, the same solution works to deal with all of these threats — stand for 10 minutes each hour, and you can mitigate many of the negative effects of sitting.

This one is something of a catch-22: experiencing shallow breathing, caused by problems like asthma or poor air quality, can often make people feel more anxious. What's another thing that causes shallow breathing? A panic attack! This can create a sort of ouroboros of anxiety for sufferers — you can't breathe, so you panic, which makes it even harder for you to breathe, which makes you panic more. Some panic attacks are actually triggered by feeling short of breath, and then lead to further shallow breathing, which can make the attack worse.

Of course, you're not always in charge of when your breathing will become shallow (say, if you have breathing difficulties); but if you find that you begin breathing shallowly when you become anxious, doctors recommend techniques like breathing through your nose and breathing "into" your abdomen. Having a meditation practice can also help you become more aware of your breath in general.

Of course, no one's perfect, so don't get mad or feel depressed if you find it's hard to put these ideas into practice in your own life; being gentle with yourself about self-care can be almost as important as the self-care itself. But remember that these techniques are out there, and it can't hurt to give them a try. You have nothing to lose but your panic attacks, right?

More like this
5 Crystals For Anxiety
By Megan McCarty
How To Protect Your Digital Privacy If You Need An Abortion Post Roe v. Wade
By Kaitlyn Wylde
I'm Going Off My Bipolar Meds to Try to Get Pregnant
By Anonymous, as told to Anna Goldfarb
5 Crystals To Manifest Better Sleep
By Megan McCarty
Get Even More From Bustle — Sign Up For The Newsletter