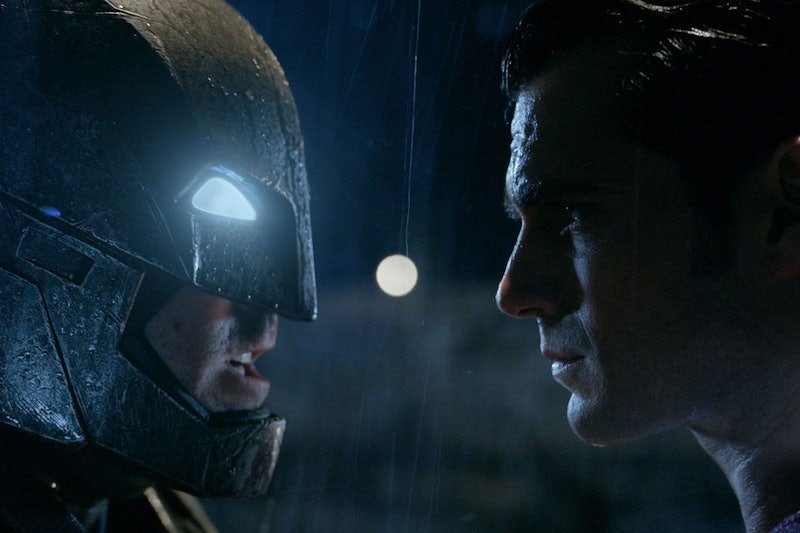 Batman v Superman: Dawn of Justice will soon hit theaters, and fans will finally be treated to seeing the two most iconic superheroes of all time together on the big screen for the first time. And not only will they be together, of course, but they'll also be beating the snot out of each other. Some fans online can't wait to see the two heavyweights go at it, while others would have preferred to see them strictly as allies. But there seems to be one thing the internet can agree upon, and that's the fact that if these Batman vs. Superman memes and jokes are to judge, the two heroes are clearly in love.

The internet is full of humor about how much it looks like Batman and Superman are going to hook up in the new movie. The reason for this, other than the obvious 'shipping that's to be expected between two handsome, muscular men in tights, is the fact that several of the promotional images released for the film really make it look like Clark Kent and Bruce Wayne are going to kiss. They're constantly nose to nose, staring longingly into each other's eyes, and one image even has Supes tenderly caressing the Dark Knight's chest. It's all pretty adorable, and one thing is clear from the following 12 memes and jokes: Batman and Superman need to stop lying to themselves and declare there love for each other already.

Can someone please make this movie happen?

2. It's All in the Marketing

Anna Kendrick gets it.

Even the toys are on board.

This song definitely seems more appropriate here than it did in Batman Forever.

That can't be an accident.

Hey, as long as it's consensual.

Can you say "false advertising?"

They've got my vote.

12. Leave It to Deadpool

Deadpool calls 'em like he sees 'em, and he's even bringing in the new Spider-Man along for good measure.

Obviously, Batman and Superman are deeply in love. They can fight and pretend they hate each other all they want, but that's just grade school flirting. The only dawn that's going to occur in Batman v Superman is going to be the dawn a new relationship between the two heroes. At least according to the internet anyway.