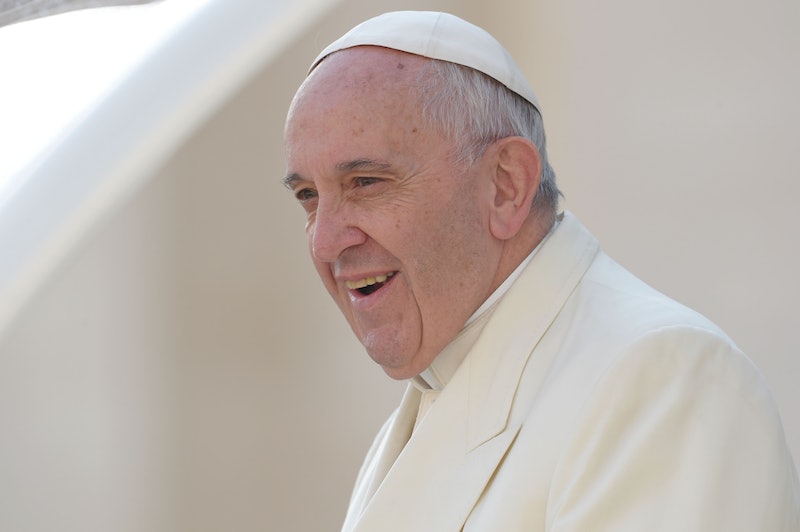 Since becoming the head of the Catholic Church, Pope Francis has visited dozens of countries, engaged in dialogue with leaders of other faiths, and even played a role in restoring diplomatic relations between the United States and Cuba. So what's the next frontier for His Holiness? Instagram, apparently. That's right: reports indicate that Pope Francis is coming to Instagram. Is the world ready? We're about to find out.

Pope Francis has already shown himself to be very positive about the Internet, calling it a "gift from God" and saying that it offers "immense possibilities for encounter and solidarity." His predecessor Pope Benedict established an official Twitter account for the papacy, which Francis has kept active (though not before the Vatican deleted all of Benedict's tweets). And now it seems Pope Francis is looking to reach even more people by expanding to yet another social media network.

According to Italian news source ANSA, Pope Francis has secured an Instagram account, and will begin posting pictures on Saturday, March 19. So get ready for some quality Popestigrams.

Although the idea of His Holiness, God's representative on Earth being on the same site where teens post selfies might seem a little incongruous, in a lot of ways, it makes perfect sense for the pope to be on Instagram. After all, the Catholic Church is huge, with over 1 billion people around the world, speaking dozens of languages — which is why the Pope actually has nine Twitter accounts, each one using a different language (and if you ever want to see something really incongruous, check out the Latin one). Despite this effort, that still leaves out plenty of people who speak languages for which the Pope doesn't have an account.

Sharing pictures on the other hand, can be much more inclusive. There's no need to translate and no one gets left out. Indeed, the Pope spoke with Instagram's founder just last month about the power of images to unite people. Is that when he decided to get an account? There's no official word on that, or on what Francis might be planning to Instagram.

Personally, I'm hoping for at least a few selfies. For one thing, it would be the first time, after centuries upon centuries of extensive images of popes depicted in paintings and photographs, that we get to see an image of a pope that he created himself, which is pretty cool. And besides, it wouldn't be the first time people used selfies to participate in the global Catholic community, as we saw last year with the Ash Wednesday hashtag #AshTag.

And it's not like Francis has been opposed to posing for selfies other people want to take with him.

Seriously, people take a lot of selfies with the Pope, guys. It's awesome.

You can eagerly await Pope Francis's posts at the handle Franciscus.

More like this
How To Change Your Instagram Bio
By Emma Carey
How To Fight For Reproductive Rights, Based On How Much Time You Have
By Courtney Young
What Is A “Softboy?” The TikTok Term & Aesthetic, Explained
By Courtney Young
Why Are TikTokers Slapping Each Other With Tortillas?
By Courtney Young
Get Even More From Bustle — Sign Up For The Newsletter