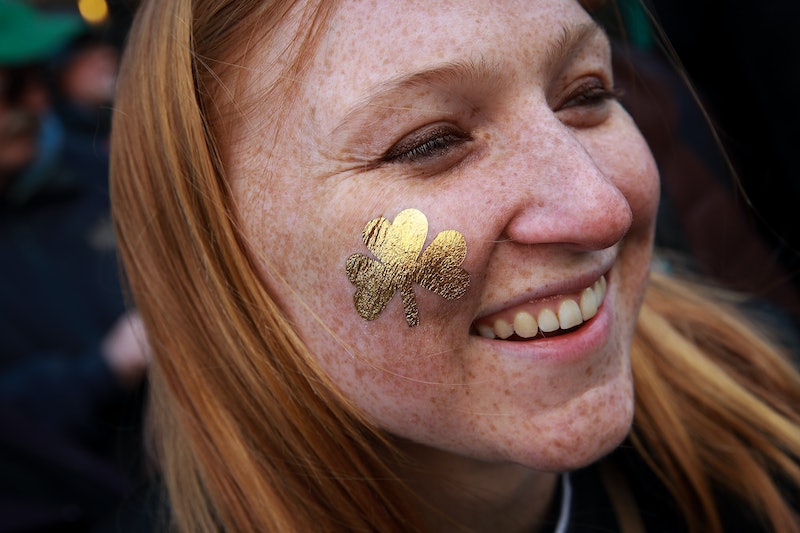 Irish storytelling is a grand tradition going back hundreds of years. Irish writers are some of the greatest in the world, and Irish filmmakers can be just as talented. From comedies, to dramas, historical epics to gorgeous animation, Irish films span all sorts of genres and have permeated the U.S., allowing for some of the most popular films on the Emerald Isle to make their way to a country full of its descendants. And so on this Mar. 17, instead of chugging green swill beer or eating foods that may or may not be Irish, why not enjoy an Irish-made movie for St. Patrick's Day?

There are plenty to choose from, so matter what genre you're feeling, there'll be something that fits your mood. The Irish are known for telling stories about magic and mythology, but there are just as many films that discuss their heritage and the hard times that the Irish people have experienced over the course of history. So from Brooklyn to In Bruges, check out 22 Irish movies below perfect to watch during the holiday (and no, Leprechaun isn't on here, as much as we all do love a young Jennifer Aniston).

The most recent film on this list was also a multiple Oscar nominee this year. Saoirse Ronan stars as a young Irish woman named Eilis who immigrates to America, where she meets and falls for a young Italian-American. The story turns immigration in the 1950s into a personal struggle and makes for a touching and beautiful film. (Streaming on Amazon, iTunes, Vudu, Google Play, YouTube)

In this utterly hilarious comedy, an entire village of country folk attempt to cover up the death of their neighbor so as to collect on his winning lottery ticket. Believe me when I say there's nothing funnier than an elderly Irish gentlemen riding a motorcycle naked through the countryside. (Streaming on Netflix, Amazon, iTunes, Vudu, Google Play, YouTube)

If you've heard and loved the song "Falling Slowly" but never seen Once, get your arse in front of the screen right now. That Oscar-winning song isn't the only lovely hit from this modern-day musical, which tells the story of an Irish busker and the Czech immigrant he falls for. (Streaming on HBO Go, Amazon, iTunes, Vudu)

This stunning animated feature from the same studio that made 2014's Song of the Sea tells the magical story of a young boy who is beckoned to adventure when a celebrated master illuminator arrives with an ancient book, brimming with secret wisdom and powers. (Streaming on Hulu, Netflix, Amazon)

OK so while this film technically takes place in Belgium, it wouldn't be the amazing were it not for the hilarious Irish quirks of co-stars Brendan Gleeson and Colin Farrell. They two play hitmen who are in hiding in the historic Belgian town of Bruges where nothing ever seems to happen, until it does. (Streaming on Netflix, Amazon, iTunes, Vudu, Google Play, YouTube)

This drama explores a long-hidden secret practice of the Catholic Church. From the 18th to late 20th century, hundreds of young girls who'd had sexual encounters or who'd gotten pregnant before marriage were locked away as virtual indentured servants, with their children adopted out. This film, based on the real-life Magdalene Asylums, examines the stories of four of the young women locked away in Ireland. (Streaming on Netflix, Amazon, iTunes, Vudu, Google Play, YouTube)

Brendan Gleeson is at his dramatic best in Calvary, where he plays a priest threatened by one of his parishioners while making confession. The lush Irish landscapes counter the dark tones of the film, and the acting from the supporting cast, including newcomer Kelly Reilly, is superb. (Streaming on HBO Go, Vudu, Amazon, iTunes)

Daniel Day-Lewis's casting as an artist suffering from cerebral palsy might draw accusations of ableism in today's film world, but there's no denying that his performance is nothing short of amazing. The film not only launched Day-Lewis' career, it won him an Academy Award as well. (Streaming on Netflix, Amazon, iTunes)

Before Michael Fassbender hit the states, he was a star in his mother's home country because of this dramatic turn as Irish activist Bobby Sands. Hunger also began Fassbender's collaborations with director Steve McQueen, and the two made 2011's Shame and 2013's 12 Years a Slave together. (Streaming on iTunes, Amazon)

Daniel Day-Lewis came through with another amazing performance as an Irish ex-con-turned-boxer in Belfast, Northern Ireland, during the intense times of "The Troubles." (Streaming on Cinemax, iTunes, Amazon)

If you're looking for something of a little lighter fare on this list, turn to this Amy Adams comedy about a woman who heads to Ireland to propose to her husband on Feb. 29. It's your typical rom-com, but Adams gives a subdued yet funny performance that's a departure from her more dramatic roles. (Streaming on Hulu, Amazon, iTunes)

This was one of my favorites back when I was a kid. Gabriel Byrne stars as a poverty-stricken dad whose two charming sons find comfort in a magical horse from Tír na nÓg, the land of eternal youth in Irish folklore and mythology. Into the West is a lovely fairy tale with some moving child performances. (Streaming on Netflix)

I dare you not to cry while watching Angela's Ashes. Based on Frank McCourt's autobiography of his childhood in Ireland, the film starred Emily Watson and Robert Carlyle as the struggling parents of a young brood in this Depression-era tale. (Streaming on Showtime, Amazon, iTunes, Vudu)

Poor Janeane Garofalo can't catch a break in this funny, incredibly '90s comedy. She plays an assistant to a senator who sends her to Ireland to trace his heritage. The love interest at the center of the story is cute, but it's the familial shenanigans that make The Matchmaker a fun time.

This drama about resistance fighters in the 1920s won the Palme D'Or at the Cannes Film Festival, and it stars then-unknown Cillian Murphy as a young member of the IRA. (Streaming on Hulu, iTunes, Amazon)

Queen of cinema Meryl Streep stars in this lovely comedy about a group of five Irish sisters who yearn for love and fulfilling lives in rural 1930s Ireland. (Streaming on iTunes, Amazon, Vudu)

Brendan Gleeson channels the hilarity that he captured in In Bruges only this time, he's teamed up with Don Cheadle. Cheadle plays an American FBI agent who is saddled with Gleeson's Irish top to stop a drug smuggling ring, and the results are pretty hilarious. (Streaming on Crackle, iTunes, Amazon, Vudu)

Philomena is what happens when one of the young women locked away a la "The Magdalene Sisters" goes searching for her long lost child. Judie Dench gives a stunning performance in this film, which mixes comedy and drama in a touching way. (Streaming on Netflix, Showtime, iTunes, Vudu, Amazon)

Irish folktales are all about magic, and nothing epitomizes Irish magic more than a selkie, a mythical creature that resembles a seal in water but takes human form on land. In this film, Colin Farrell plays a dad whose daughter is convinced that the woman they've caught in their fishing net is a true selkie. (Streaming on iTunes, Amazon, Vudu)

The most classic film on this list, The Quiet Man was supposedly John Wayne's favorite of his performances. In it he plays an Irish-American boxer who retired to Ireland, where he meets his match in love interest Maureen O'Hara. (Streaming on Netflix, iTunes, Amazon)

There are plenty of great options to watch this St. Patty's Day — choose wisely.