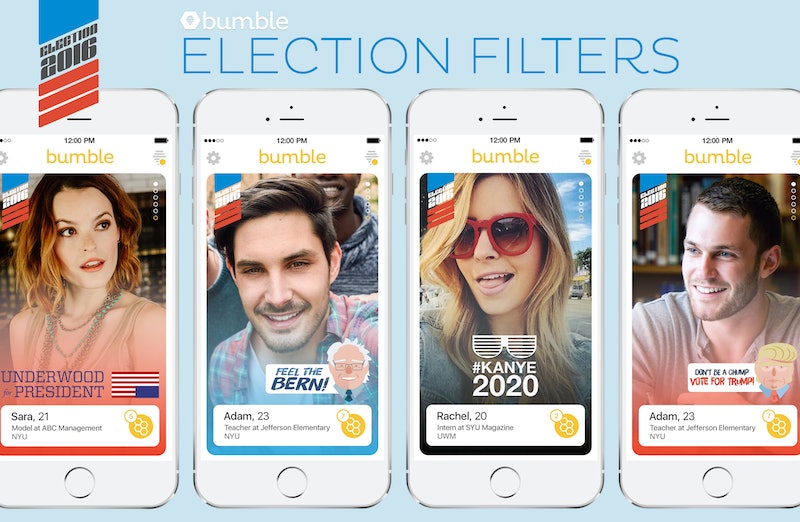 Dating app Bumble is about to launch Election Filters shortly, so now you can see what political affiliation a potential match is before you swipe right. Though some people think talking subjects like politics and religion is taboo and too soon for a first date, I think this is a great added benefit to Bumble. Plus, recent Match survey of over 5,000 singles in the U.S. found that talking politics on the first date makes for better odds that you’ll have a second one — by 91 percent. So, Bumble’s Election Filters align with this mindset perfectly, as now you have yet another built-in conversation-starter with a match, aside from where you went to school or what you do for a living.

The single American woman is “the most powerful voter this year,” says New York magazine, so I'm sure some on Bumble will want to choose matches based on their political leanings. After all, you’ll find out your partner’s viewpoints eventually, so why not sooner rather than later?

“We really wanted to help users take part in the conversation taking place in our country right now,” Whitney Wolfe, Bumble’s CEO, tells Bustle. “Political views are at times emblematic of entire value sets and at the core of what many people care about. It can tell you a lot about a person — what they care about, what matters to them. Think of this as a digital bumper sticker. We want to also encourage our very active user base to get out and vote, be a part of our country's future!”

In case you’re not familiar with it, Bumble’s the dating app where women message men first (or either person can message first for same-sex relationships)… and within 24 hours. I love both of these parameters for several reasons — namely, you don’t get into collecting an endless number of matches, with no one ever messaging the other person, and there’s nothing like a deadline, aka the ticking clock, to get you to message someone.

I was only on Bumble for a week. The second guy I went on a date with became my boyfriend — it was love at first swipe. Needless to say, I am a big fan of the app — and I’ve tried almost every dating app out there).

Had Bumble’s Election Filters been on the app when I met my boyfriend, we probably would have bonded over Bernie and used this “Feel the Bern!” filter.

And, if sharing your political affiliation is too much, too soon, you can always choose the “Pizza for President” option. (When I was on dating apps, I mentioned pizza in my profile — how I could eat Chicago-style pizza every day — so I love this one!)

Here are more reasons you should consider using the Election Filter on Bumble, because whether you lean Blue, Red, or pizza, there’s a Bumble filter out there that’s perfect just for you. And if politics isn't your thing, Bumble’s going to roll out more filters in the future, too, which could be anything from sports to current events.

Even though women message men first on Bumble (at least, in heterosexual exchanges), what to say in a first message can still be a challenge. Now, the bumper sticker speaks for you and makes for an instant conversation-starter. (Thank you, Bumble.)

2. Singles Who Talk Politics On A First Date Have Better Chances Of A Second Date

As I mentioned above, discussing politics on a first date increases your odds of scoring a second one by 91 percent — who knew?! — so get to talking!

As you probably know from your own dating life, politics can be a serious issue between you and your partner. I remember avoiding the topic with a guy I was dating… until we passed a homeless person and the guy said, “He should get a job.” As someone who’s worked with homeless people a lot over the years, I was appalled. “He’s probably tried,” I said, and bought him a sandwich and blanket, as well as gave him the name of a local shelter. The guy then realized I was not a die-hard Republican like he was, and we found we had less in common than we initially thought. Suffice it to say, we didn’t work out.

“I think there’s a truth to the phrase ‘opposites attract.’ Though I think that pertains to certain personality characteristics and dispositions. But having conflicting fundamental values? I’m not so sure. It would probably take a lot of time and effort — things that people with opposing views these days don’t seem to have.”

4. But Opposites Attract, Too

Despite the above, some say opposites do attract and plenty of Democrats and Republicans have found love. A recent Match study agrees and revealed that 79 percent of singles do not have a problem dating someone from a different political party — versus six percent who felt their partners should share the same political viewpoints.

5. Discussing Politics Is Inevitable At This Time Of Year — Everyone Is Doing It

Whether you use a Bumble bumper sticker to reveal your political affiliation or not, politics is bound to come up in conversation either online or off. After all, ‘tis the season to discuss political debates and what insane (or wonderful, depending on your stance) thing Donald Trump said on TV today. Or his hair. You can always bond with someone over The Donald’s hair.

That same Match study also discovered that singles who are into politics, whether they’re for Blue or Red, usually have better sex (i.e., more orgasms and multiple orgasms more often). “The kind of person who’s going to be very passionate in any sector that interests them, they’re going to be passionate in any other sector,” said Helen Fisher, Match's scientific adviser. If that’s not reason enough to be passionate about your political point-of-view, whatever it may be, I don’t know what is.

“Selecting a filter is making a statement,” says Wolfe. “That statement helps tell users what you care about, what you're passionate about, or how to feel about an important topic. We are confident that these filters will help users better understand the people they are connecting with.”