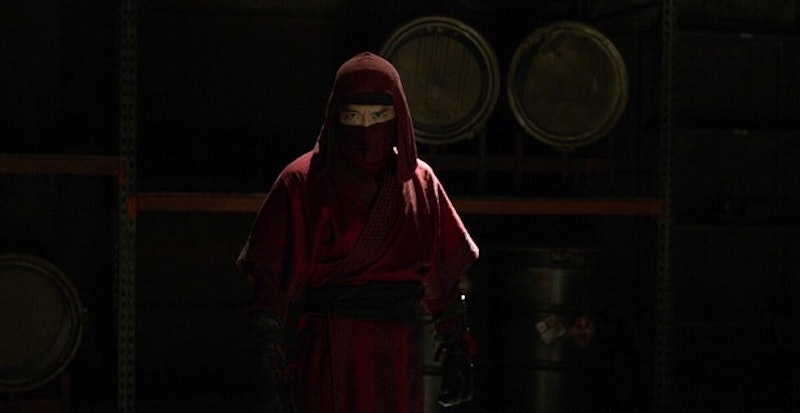 Spoilers for Daredevil Season 2 ahead. Trailers and other clues had fans speculating that Nobu would return for Daredevil Season 2 and it turns out, they were right. As Episode 9, "Seven Minutes in Heaven," revealed, despite Matt seeing his enemy burned alive in front of him last season — leading even Wilson Fisk to believe he was dead — Nobu is alive. Now, one major question remains: How? Like many fans also suspected, it all seems to lead back to the Hand.

Season 2 confirmed the involvement of the Hand in Hell's Kitchen, and Stick explained some of their history to Matt. In addition to revealing that they're behind the mysterious Black Sky, Stick said that the Hand found the secret to immortality. Though he doesn't go into any details of how they did this or what becoming immortal entails, this does follow Marvel Comics' version of the Hand. There, it is also an organization of ninjas, but one that practices occult magic, which sometimes allows them to bring someone back to life.

When Nobu removes his mask on Daredevil, his face is badly burned, so he clearly was actually engulfed in the flames that we saw last season. Considering how long we saw him burn and Fisk's belief that he was dead, it's much more likely that Nobu was killed and brought back to life, than that he survived the fire. The fact that the Hand resurrected Nobu isn't a full explanation, but it seems to be all Daredevil is revealing — at least for now.

The group is conducting terrifying experiments of some kind, in which they drain the blonde from a group of young people and replace it with toxins, with everything being funneled into a large urn that Nobu is protecing. Perhaps this urn and blood procedure is part of how members of the Hand become immortal. But even if the urn is responsible for Nobu's return, there's a piece missing from the Hand's involvement: the Beast.

In the comics, the Beast is the one who teaches the group how to practice magic and resurrection, but so far, this hasn't been part of Daredevil's portrayal of the Hand. It could be because the inclusion of a demon wouldn't remotely fit in on the Netflix series, which has maintained a gritty, more realistic tone. But if Daredevil is willing to bring people back from the dead in Season 2, it needs to find a way to explain such abilities, so that realism may not last much longer.