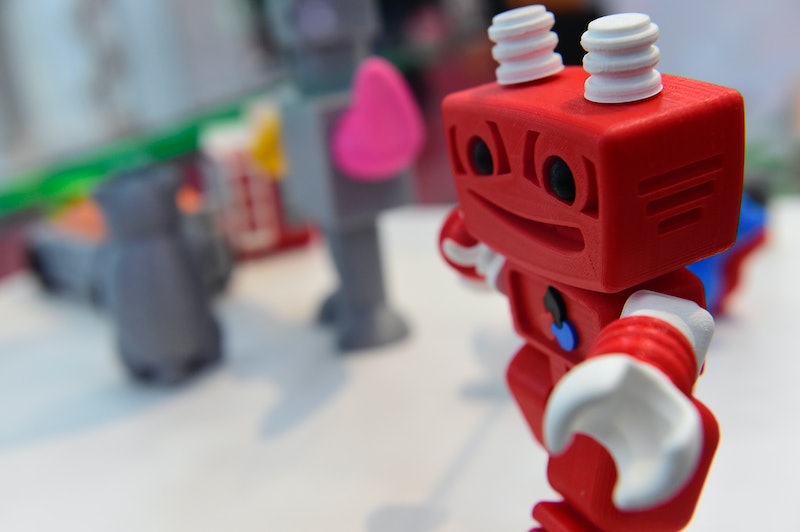 Sometimes I wonder if robotics experts have ever seen a science fiction movie, because they all seem rather eager to give robots the capability to take over the world. For instance, robots are now teaching themselves hand-eye coordination. Which is terrifying because dealing with the physical world might be the one thing that human beings are still better at. Plus, being able to grab and use things in the physical world is a pretty crucial step in rounding us all up and taking over our planet.

The thing about robots and computers is, as a psychology professor of mine once explained, they are often very good things humans find incredibly difficult and very bad at things humans find incredibly basic. A computer can beat a chess grandmaster, for instance, but it turned out to be more difficult to teach one to recognize handwritten numbers. Robots are similarly odd when it comes to what they're good at. A robot might be able to do a decent job of mimicking a cat, but actually being able to pick something up? Now that is some difficult stuff.

But apparently the good people at Google are teaching robots these skills anyway — or rather, creating robots capable of teaching themselves these kinds of skills. Because no one takes science fiction movies as seriously as they should. Am I the only one who thinks we should keep track of the sorts of things robots are capable of literally getting a hold of?

Yes, that's right, just like people. Google is teaching robots to learn in the same way that human children teach themselves new things. Ultimately, the goal is for robots to be able to interact with objects they've never seen or encountered before, without needing to be programmed on how to interact with each new item. It took over 800,000 attempts, but researchers say that these robots have now started to automatically adjust their grip before even making an initial attempt to pick up an object, indicating that they are well on their way to mastering the skill. They've even started adjusting objects before trying to pick them up in order to make them easier to grasp.

You just wait. Sooner or later, these mechanical nightmares are going to get tired of writing Friends episodes and keeping telemarketers busy and they're going to start picking up something more dangerous than a plastic dinosaur. And then, much like the dinosaurs, we will one day be the ones who are extinct.