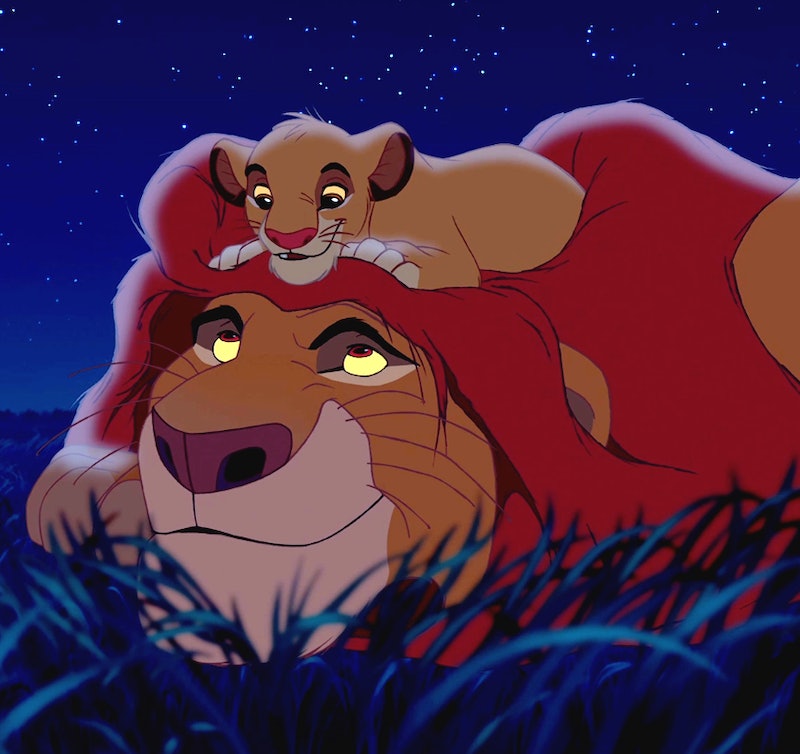 I was only 5 years old when I first saw The Lion King through my extremely small antique TV set. Of course, I couldn't understand any of the deeper themes of the plot; all I could grasp at the time was the magnifying pull this one Disney film had over my childhood. At that young of an age, I unchangingly and perhaps instinctually connected with the warm colors, the soothing soundtrack, and the calming effect of James Earl Jones' voice. The Lion King has shaped my life, and I will never stop watching such an iconic story.

The movie remained a constant presence throughout my youth. Every holiday, birthday, and just-because day, I watched the film over and over. As the years passed, of course, my fascination for the film decreased and I started to forget the impact the 1994 film had on me. That is, until my senior year in high school when my English teacher passed me a copy of Shakespeare's Hamlet. The storyline of a young man seeking vengeance for his father's death spoke to me, and I suddenly realized the parallels between Hamlet and the animated film I'd once loved so dearly. From that moment on, the habit of watching this film in good times, bad times, and oh-what-the-hell times returned — and has remained ever since.

You see, there are only so many movies I can point to and say, "that changed my life," — and The Lion King was one of them. Here's why.

1. The Influential Message Behind "Remember Who You Are..."

In my 23 years of life, no other book or film has ever featured a quote that has held such significance in my day-to-day life. The Lion King is one of the few Disney films that introduces individuality with heritage. Coming from an immigrant household as a first generation Canadian, this theme of reminiscing about one's roots struck a chord with me.

As Simba is called upon by his father's spirit to never forget his legacy, the powerful theme of finding one's place from their birthright hits home. When you are a first-generation child coming from an immigrant family, you have the innate ability to blend various cultures into your persona. We are who we are because of our parents, our grandparents, and our ancestors. Their journeys are what raised us to be the people we are, and they live within us.

It's hard not to watch this film and not reflect on the relationship we have with our parents. I cry as I write this, because no relationship in this world is greater than the one between a child and their parent. I personally don't know what I would do without my father, so the passionate link that Mufasa and Simba hold that inevitably surmounts DNA and borders on the foundations of friendship, trust, honesty, and love is a storyline I crumble thinking about, so much that it constantly keeps me coming back for more.

3. It Has A Tragic Yet Commanding Revenge Narrative

The Lion King centers around the tale of a young boy who is accused of his father's death. As twisted and horrifying a story that is by itself, especially when the boy's uncle is behind the tragedy, a revenge narrative emerges to make things even more captivating.

Simba's friends, Timon and Pumbaa, who hilariously rescue him from exile are arguably the best sidekicks in the Disney universe. I mean, come on, they had a groundbreaking mantra, fought their hearts out, and provided necessary laughs in an already intense atmosphere. Sometimes while rewatching this classic, I really wish this talking warthog and meerkat were real, because life just seems so much easier, more relaxed, and filled with glorious memories when these two are around.

5. It Delivers The Moral That Love Will See You Through Your Hardest Struggles

One of the greatest reasons I return to this film over and over again is because it shows the power of love. The film radiates that despite the adversity and curveballs life may throw our way, the love you share with someone else will always become the light at the end of the tunnel. Simba and Nala saw each other through turmoil and devastation, but together they fought for a better purpose — their love.

Life changes people. Situations change people. People also change people. However, as both Simba and Nala grew into adults, the constant oscillation of their relationship displayed the perpetual explanation that love is being there and being present for absolutely everything.

6. It Has Words Of Wisdom From A Crazy Mandrill That Really Are The Only Inspiration You Need

Rafiki was what some may call spiritual, or strange. In this 1994 Disney film, he was the voice of reason and sagacity through Simba's toughest situations and road blocks. Every time I watch Rafiki in a scene, I take something new from what he is saying. In one of my favorite scenes of the film, seen below, Rafiki says to Simba, after whacking him in the head with his stick, "The past can hurt," but, in life, what doesn't kill you will only make you stronger, funnier, wiser, and braver. It's this type of feelgood message that assures me I can move mountains with a little heart, passion, and fight.

7. I Still Get Chills Listening To The Beauty & Power Of Its Soundtrack

To me, The Lion King has one of the most critically-acclaimed music of any Disney film. Songwriter for the soundtrack, Sir Elton John said in a 2011 interview, “When Tim Rice called me to do the Lion King in 1993, it changed the course of my career and my life,” and I share in his sentiment. With the underlying theme of African influence, percussion instruments, and uplifting rhythms, I always come back to The Lion King to feel enlivened, powerful, electrified, and invigorate my perspective on any given situation in the musical moments behind the script. The music of this film changed my life.

8. Despite Its Devastating Motifs, There Are Golden Moments Of Undeniable Humor

It goes without saying that every colorful character that walked through your screen had a lighthearted or clever humor behind the sadness. Even though it's seriously difficult to get through sobbing uncontrollably, the film still manages to make me laugh through the pain — a fighting monkey, a drag hula dancer, and three glorified hyenas, all blend impeccably to provide some light in an already dark place.

9. The Symbolism Of Pride & The Devil Are Woven Into Scar In The Most Harrowing Way

Scar is one Disney villain I have feared the most. He was conniving, creepy, and disturbing, but he also proved to be a great testament to how much pride can kill. As Scar reveals his plot to murder his brother Mufasa in his song, "Be Prepared," he sings, "I know that your powers of retention are as wet as a warthog's backside, but thick as you are, pay attention. My words are a matter of pride." The word "pride" is used very significantly placed here. As C.S. Lewis writes in his book, Mere Christianity, "...the essential vice, the utmost evil, is pride... It was through pride that the devil became the devil." His desire to have domination over Mufasa proved a parallel to that of Satan. And if this symbolism in a children's film doesn't petrify you into deep appreciation, I don't know what will.

Every time I hear this quote said by Rafiki as Simba sees his deceased father's reflection in the water, I cannot contain my tears. It is one of the most poignant moments I connect to in the film. It pulls me by my heart strings and doesn't let go, because it feels like a similar reality of my person, and, most importantly, it feels like hope for a possible outcome from the impossible. It continues to be a roller coaster of emotions for me when I hear this line and it was terribly unapologetic.

11. It Leaves The Lingering Emotion That "You Must Take Your Place In The Circle Of Life"

Whenever I watch The Lion King, I am reminded of the feeling of home. In the first three minutes of the film, something so beautiful occurs — the film reaches in to the depths of my soul to tell me that we were all put on this earth for some odd or strange reason, but the world works with everyone playing their role to make it a gorgeous puzzle.

I think this reason is pretty self-explanatory. Despite the dark themes, the valiant retribution, and the twisted plotlines, The Lion King reminds us that our lives aren't always in our control through this philosophy, but, when you relax and breathe, life can be far easier to bear.

It's goes without saying, The Lion King is hands down my favorite film. With every song, every message, all the tears I shed watching it and all the heart I feel when the credits roll in, it is a movie I will never ever give up. I think it definitely goes without saying, neither should you.