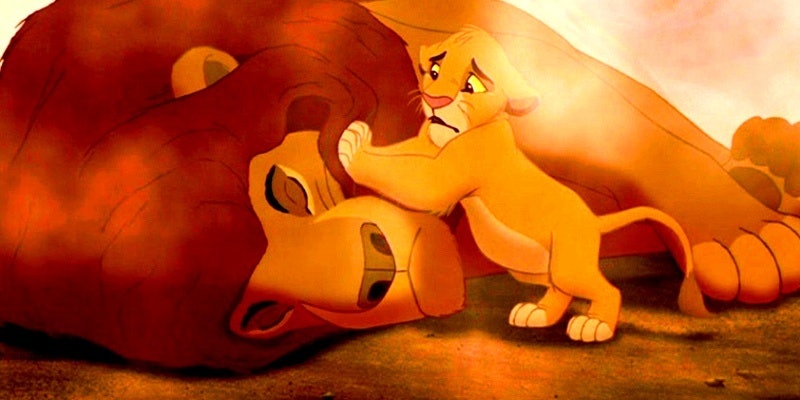 The earliest form of entertainment most kids are exposed to comes directly from the Disney library. There is just no getting around the fact that Disney was your childhood. What you might not realize is while you were watching The Lion King, Snow White, and The Little Mermaid, Disney was dishing out some tough life lessons. There is no subject too deep for Disney to tackle: Death, the trouble with zoos, heartbreak... did I mention death? Disney wanted you to be prepared for every harsh reality the world beyond your sit and spin could dish out. Were you ready to be taught these lessons? That's debatable. Either way, you can't say Disney wasn't honest with you.

The land of Mickey Mouse is nowhere near as innocent as you think it was. It's a place where facing your parents' mortality is an everyday occurrence, there's no sugarcoating being poor, and you constantly have to sacrifice your happiness for the sake of others. The only thing missing is a movie highlighting the realities of taking out a student loan.

Hey, someone had to tell you the hard stuff, and it all sounds better coming from Disney than from your grandparents. Here are 16 tough life lessons Disney taught you before you learned how to read.

1. Everyone You Love Will Die, But Especially Your Parents

Mufasa, Bambi's mom, both of Tarzan's parents — Disney wanted to make sure you knew early on that the safety and comfort of your parents could be ripped away at any time and without warning. That's the trouble with mortality, kids: It comes for everyone eventually.

2. Animal Cruelty Is All Around You

The dark underbelly of the circus is explored in Dumbo, 101 Dalmatians is a PSA against fur, Bambi showcases the horrors of hunting, and The Rescuers Down Under taught you all about poaching. If Disney didn't turn you into a passionate animal activist, then nothing will.

Disney deserves props for always emphasizing who you are is more important than how much money you have in your pocket, but they also didn't idealize being poor. Cinderella's life of servitude had singing mice, but that didn't stop it from sucking, and Aladdin had a whole song about the misery of his life of destitution. Money can't buy happiness, but it can buy bread.

4. Women Unfortunately Have To Worker Harder Than Men To Be Taken Seriously

Mulan and Belle are prime examples of women who had to go to extremes to be taken seriously. Mulan went undercover as a man so she could become a warrior, and everyone dismissed Belle as a (weird) pretty face until she protected her father — and later the Beast. Disney showcased gender inequality in a big way.

5. Lying Only Ever Makes Things Worse

Any time a character in a Disney movie lies, it comes back to haunt them. If you didn't learn to tell the truth after watching Pinocchio and Aladdin, then I envy your devil may care approach to life.

From Wendy choosing to leave Neverland behind to Ariel saying goodbye to her father, the message that childhood is fleeting came through loud and clear.

7. Self-Sacrifice Is Noble, But It Hurts

There are few things more noble than self-sacrifice, but Disney made sure you had all the facts before you decided to be a hero. Sitka dies to save his family in Brother Bear, loyal old Trusty throws himself in front of a wagon wheel in Lady and the Tramp, and Pinocchio's sacrifice for Gepetto turned him into a real boy in Pinocchio. This trend continues today thanks to characters like — *sob* — Bing Bong from Inside Out.

Babies are born, new toys are introduced into your perfect toy ecosystem, and if you are Alice from Alice in Wonderland, sometimes you wake up just knowing you aren't who you were yesterday. These movies made sure you were prepared for any curve ball life had waiting for.

9. You Can Have Too Much Of A Good Thing

You have to look no further than Winnie the Pooh to see the dangers of over-indulgence. Too much of something you love can end with you getting stuck in a bee hive, which never ends well.

10. Loneliness Is The Worst State Of Being

People need other people. Quasimodo, the Beast, Simba, and Gepetto are just a few characters whose lives were improved by letting people in.

There are lots of wonderful people in the world, and Disney was all about showcasing the best parts of the human spirit. However, some people are just terrible for no good reason. Cinderella's stepmother and stepsisters, Gaston, basically everyone in The Hunchback of Notre-Dame who wasn't Quasimodo, and Cruella were all just rotten for no discernible reason besides reality.

From Pocahontas and John Smith to the more recent ache of watching Andy say goodbye to Woody and Buzz, farewells are one of the hardest parts of life.

13. Your Actions Have Consequences

You shoot a deer and its kid ends up an orphan, you don't invite that person you don't exactly like but who is in your extended friends circle to a party and they curse your kid, or you don't listen to your dad and inadvertently get him killed by his brother — hopefully, in real life your actions never had such dire consequences, but Disney wanted you to be prepared.

14. Running From Who You Are Does No Good

Embracing your true self, no matter how hard it seems, is the only way to a happy life, and Disney made that clear by showing how miserable characters who tried to be something else were.

Sometimes friends grow apart like they did in The Fox and the Hound, but that doesn't mean they stop being friends. Although, sometimes it does. When Mowgli left the jungle in The Jungle Book, he probably stopped hanging out with Baloo. As a kid, the idea that your best friend might not be your best friend forever hurt more than anything else, but it was something you had to learn.

16. Happiness Should Be Treasured

This doesn't seem like a hard life lesson, but knowing how hard life is and how little control you have over the big stuff can drive you crazy. No matter how bad things got for your favorite Disney folks they found a way to embrace their happiness, which is the most important lesson of them all.

Disney has always had your back, guys.