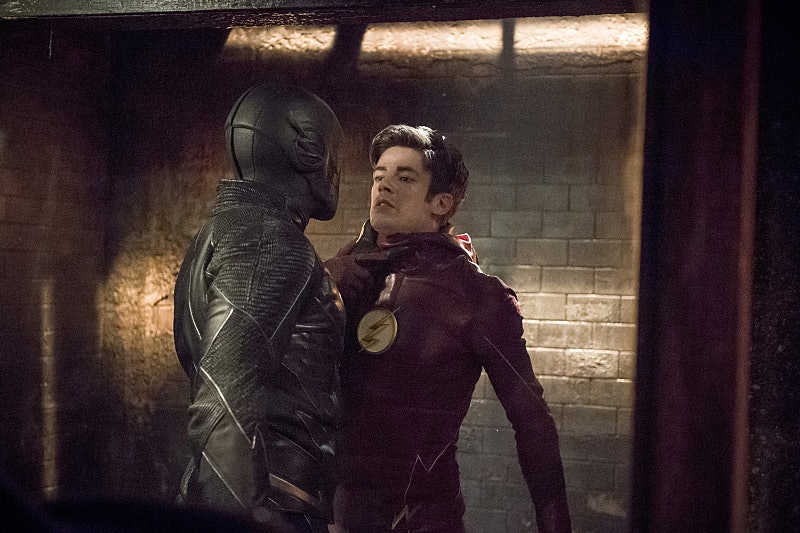 Before The Flash zoomed off for a short hiatus, it answered the question that's been fueling debate all over the Internet since Season 2 began. It seems that Jay Garrick is Zoom, the Earth-2 speedster who's been wreaking havoc across dimensions all season. Garrick was a popular guess for the big bad's secret identity among fans, given his outsider status. But at the conclusion of the Feb. 23 episode "King Shark," that theory was seemingly confirmed for good. It makes sense that Zoom would infiltrate the S.T.A.R. Labs team as a friend, both to get close to that Earth's Flash and to learn more about his own cellular degeneration. But, as is the way with this show, the logistics of the whole thing are fairly mind-boggling. How can Jay Garrick be Zoom?

Let's back up to that reveal for a second. It was only for the benefit of the audience; Barry and Team Flash have no idea that Jay is this season's nemesis. In fact, they think that Jay is dead. They saw Zoom reach out through one of the breaches a fraction of a second before it closed and murder Jay. In "King Shark," Barry gives a rousing speech about how he and his friends should be honoring Jay's memory; he even displays Jay's helmet in a place of honor. ("Jay's death is not in vain.") How awkward. More awkward still is that Garrick really is dead. Zoom comes back through the breach into his lair (the mysterious masked prisoner looking on, quaking with fear), dumps Jay's body unceremoniously, and takes off his mask to reveal a face identical to the one on the body sprawled on the ground. "Well," Jay/Zoom says, "this is a complication."

But how? The Flash creative team promises that all will be revealed in due time. Showrunner Andrew Kreisberg told Entertainment Weekly of the implications of that reveal: “How all of that plays out and what’s actually happening, we’ll leave for after the break." So fans could just wait to get the explanation straight from the source, but part of the fun of watching The Flash is coming up with crazy theories about the heroes and villains of Central City.

Thanks to Kreisberg's Entertainment Weekly interview, I can rule out a sneaky trick being played on the audience. "[Zoom] is Hunter Zolomon, aka Jay Garrick," the executive producer confirmed. Remember that Hunter Zolomon is Earth-1's equivalent of Garrick; it took the team some digging to find him, since he was adopted as a child. (That name alone got conspiracy theories circulating, since Zolomon is Zoom's alter ego in DC comics.) So is that Earth-1's Zolomon carrying Earth-2's Garrick in the final seconds of "King Shark"? And who is Zoom's captive?

With concurrent alternate realities and characters who are speedy enough to travel back in time, the possibilities are endless. Flash fans have already seen how those conventions can be played with through the Eobard Thawne / Harrison Wells arc in Season 1. Screen Rant presents a compelling theory re: the many faces of Jay Garrick / Zoom / Hunter Zolomon, and it pulls in the case of Jay Garrick's disappearing speed. Jay admits to Caitlin that his powers have been depleted by consuming the Velocity drug. Could the drug have also made him into a bloodthirsty supervillain? Screen Rant's Andrew Dyce wrote:

But how would a speedster fast enough to leave Barry Allen in his dust acquire something only his younger self has …? Simple: travel back in time. Specifically, to take the healthy cells from your younger self.

I like this theory because it's the only plausible set of circumstances that explains why Zoom would keep that prisoner's face obscured. There are three Jay Garricks in that last scene in "King Shark" — including one from the future who has no ethical issue with destroying his past self. The prisoner even tried to communicate Zoom's identity to Barry in "Escape From Earth-2," but Barry misunderstood his meaning.

I suspect that Barry and his friends won't be kept in the dark about this for much longer, and that the season will end with an epic Flash/Zoom showdown to rival the Season 1 finale.